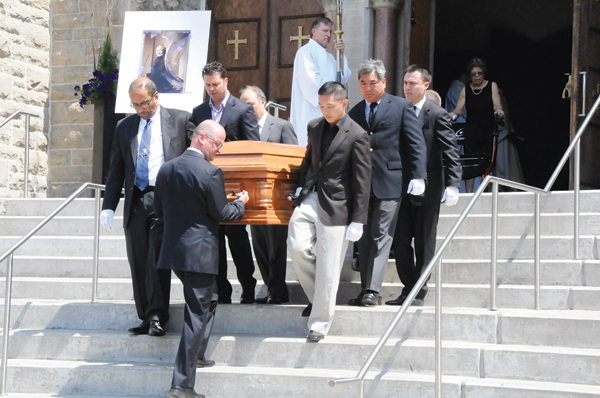 There is one thing that Ray Chang’s daughter, Brigette Chang-Addorisio, and Bill Holland, his business partner, agreed on in their eulogies – that if he got wind of Saturday’s celebration of his life, he would have nothing to do with it.

Holland said Chang would have said, “move on,” and Chang-Addorisio said her dad would have wondered what the fuss was about, never wanting to be the centre of attention.

The businessman, philanthropist and Chancellor Emeritus of Ryerson University was in the limelight at a celebration of his life that took place at St. Patrick’s Roman Catholic Church and at the Mattamy Athletic Centre (formerly Maple Leaf Gardens), Ryerson University, in Toronto on August 9.

Chang, who died of leukemia on July 27, was lauded for his humility and generosity by his family, friends, colleagues and associates.

Holland, his friend of 25 years and partner at CI Financial, described him as a giant of a man who always had a smile on his face.

“We all know Ray achieved so much in his life. There was Ray, the lifelong student; Ray, the ridiculously successful businessman; Ray, the philanthropist; Ray, the community leader, both in Toronto and his homeland, Jamaica. Most importantly was Ray, the family man. But what set him apart from anybody I’d ever known was the genuinely nice and generous things that he did for people that he came into contact with that nobody, nobody, would ever know.”

He said that in a world that so envies being rich and famous, Chang lived his life to be generous and anonymous.

He said Chang was incredibly warm, welcoming and gracious and remembered while studying for the CFA, a very demanding financial analyst course that takes three years to do, that Chang was explaining to him all the mistakes in the course material.

What intrigued him about Chang was that with all his education, he always tried to make everything simple.

Holland related a story of Chang helping a 19-year-old Sri Lankan refugee who was working in the mailroom at CI Financial, studying to get his high school diploma with plans to study part time at a university.

Chang walked into the mailroom at 9 p.m. when the young man was studying math and taught him the subject. One year later the worker was able to move out of the apartment he shared with five people into a small apartment by himself. Chang gave the young man, who had no furniture, a cheque for him to furnish his new place.

“Ray’s kindness taught a 20-year-old kid that the world isn’t necessarily a bad place. He helped turn Roy into a ridiculously successful, educated and very proud Canadian who is still with CI to this day. And I see the fruit of Ray’s kindness every time when Roy offers his support to young people. Ray did things like this all the time,” said Holland about the Order of Canada and Order of Jamaica recipient.

Chang-Addorisio, with husband, Anthony, standing beside her eulogized her father as a powerhouse in her life and that of her brother, Andrew. He was gong gong (grandfather) to her daughter, Savanna Grace and son, Lucas Cole.

“It’s amazing that one man touched the lives of so many, especially a man that was so quiet and reserved,” she said.

She said her dad was intrinsically cool and that while growing up the kids in the neighbourhood were fascinated by the Chinese man who had a thick Jamaican accent.

“Our parents expected us to respect our elders, focus on education and mind our manners.”

She said her father had an incredible work ethic and an extraordinary brain. “Through his example, he taught Andrew and me that perseverance was the key to success, “ she said, noting that despite his busy schedule he would still manage to find time to sit with them and watch the Sunday Disney movie.

Chang-Addorisio said her father had always been an advocate for lifelong learning and instilled them with the belief that with education the possibilities were endless.

“Andrew and I are infinitely proud of all his accomplishments and accolades, however, we’re most thankful for the values he demonstrated: perseverance, integrity, patience, kindness, modesty, and the confidence to be true to oneself.”

Holding back tears, she said her father would not want anyone to cry for him but to “take the loving energy in your hearts and go forward to make a difference in the world, not for his sake but for the sake of others.” 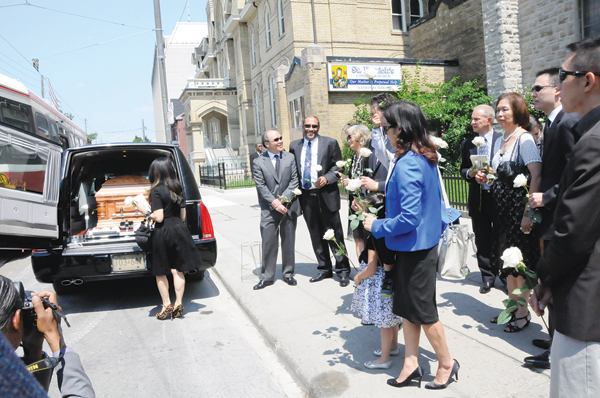 Chang’s widow, Donette Chin-Loy, said the logo called ‘Celebration of Life’ which adorned the programme of the funeral service was his idea.

In anticipation of a summer party he was planning for August 17 at home to celebrate his life, he had CI Funds marketing department design it.

The image has part of the red maple leaf seen on the Canadian flag, the colours of the flag of Jamaica and the five golden stars of the flag of China to mark his Jamaican by birth, Hakka Chinese by heritage and Canadian by choice mantra.

She said he was always optimistic and surrounded himself with good thoughts.

At the thanksgiving service, celebrant Rev. Fr. Luc Amoussou, S.J. said Chang raised the hope of many to dream big and high. He described him as a lover of good whose personal journey of faith shaped him to be a man for others.

Also participating in the service were the Most Rev. Archbishop Charles H. Dufour, Rev. Monsignor Gregory Ramkissoon, both of Kingston, Jamaica, and Fr. Santo Arrigo.

Karen Chang, the eldest sister, said they came from a huge family and Ray was just carrying on the tradition, which she hopes, will be continued in her generation.

Plans were being made in Jamaica for a get-together of the five houses of the cousins that grew up together. She said Ray was raised not only with brothers and sisters but with five houses full of cousins.

“Raymond didn’t just spring out of the ground. He came from a family of a tradition and it started with our Agung who stressed education always.”

The other sisters — Thalia Lyn, Mary-Joy O’Reilly, Lily Lubianski and Jo-Ann Chang — all participated in the thanksgiving service.

The family requested that donations be made in Chang’s honour to the following organizations which he held close to his heart: the Ho Ping Kong Centre for Excellence in Education and Practice (CEEP) fund at Toronto General & Western Hospital Foundation, Food for the Poor Canada, and St. George’s College Endowment Fund.

“When Ray believed in something he got behind it with his whole heart. He was a passionate supporter of sustainability through agriculture, a committed businessman, a loyal friend. He believed in lifelong learning.  His trademark philosophy was “a hand up not a hand out.” Ray advocated for Food For The Poor because in his words, we identify the need and we get it done. Ray always got it done. He had an open mind, an open heart and a generous smile and we will miss him,” said Samantha Mahfood, executive director, Food For The Poor Canada.

In his recently published book, The Art of Medicine: Healing and the Limits of Technology, legendary internist, Dr. Herbert Ho Ping Kong, acknowledges the generous and dedicated support of Chang.

Danny Ho Lung, a friend of Chang speaking on behalf of the St. George’s Old Boys Association described him as a humble and unpretentious man.

“Our high school motto “ad majorem dei gloriam” – or “for the greater Glory of God” – reverberated in Ray whose whole life echoed the sentiment – “everything done for the greater glory of God.” And pleasing God, to Ray, meant loving and caring for his family, giving back to the institution which gave him his value system, and giving back to society to make this world a better place,” said Ho Lung.

A few blocks from the Mattamy Athletic Centre where the reception was held, sits a bench in honour of the time Chang served as chancellor of the university, 2006-2012, just outside the Ryerson Theatre where he shook the hands of thousands of students at numerous convocation ceremonies.

Across from the bench, the Canadian flag flew at half-mast and not far from there is the building bearing his name, G. Raymond Chang School of Continuing Education, also known as The Chang School.

Canadian doyenne of gospel, jazz and blues, Jackie Richardson, sang Etta James’ “ At Last” and her daughter, Kim Richardson, who sang “Ave Maria” as the entrance hymn, performed a “Celebration of Life Medley” accompanied by jazz pianist, Quincy Bullen as the final chapter of Chang’s life came to a close in a service befitting of his quiet and unassuming feats.