TORONTO, Ontario — The second African Canadian Summit has launched a Black voters campaign using the slogan and hashtag, #BlackVotesMatterCdn, in the lead-up to the upcoming federal general election.

Held under the theme, “Critical Crossword and the Crisis in the African Canadian Community,” at the Ontario Federation of Labour on April 29, organizers noted that citizens across Canada will be called to vote in an election that will have significant implications for the direction of the country.

The summit, organized by a partnership made up of the African Canadian Legal Clinic, Ontario Federation of Labour, Canadian Labour Congress, Coalition of Black Trade Unionists and Midaynta Community Services, offered the Black community an opportunity to highlight, discuss and begin to strategize and organize around its pressing issues.

“These issues include mandatory minimum sentences within the Criminal Code, employment opportunities, the treatment and over-representation of African Canadians in federal prisons and various pressing matters in the area of national security (Bill C-51), citizenship and immigration. It is essential that the African Canadian community have an unprecedentedly strong voter turnout for this 2015 federal election,” said the organizers in a communiqué after the event.

The purpose of the second summit was to build on the progress that has been made since the first one, which took place in March 2013. 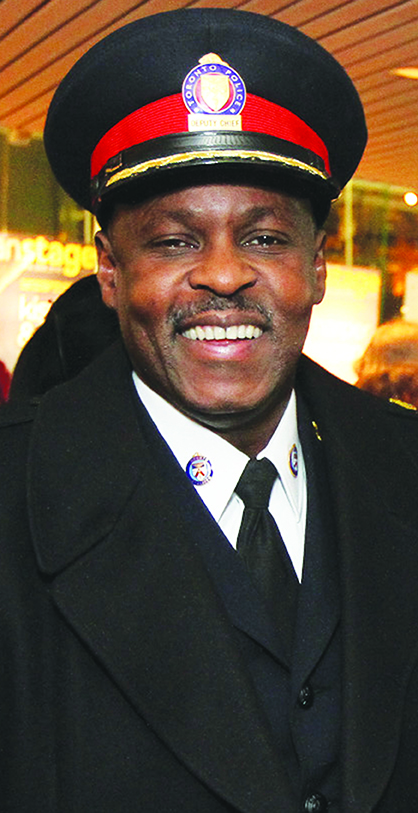 Toronto police Chief, Mark Saunders — and Mayor John Tory — attended the Summit. In his short address, Saunders apparently, didn’t have anything new to add to the carding controversy, saying that, he will have conversations about it, but won’t discard it. Photo by Bruce Murray.

“While this crisis is real and runs deep, critical hope for a new direction remains strong. This hope remains because of the current and unique social and political climate which includes: the Black Lives Matter Movement; the UN International Decade for People of African Descent (2015-2024), and the upcoming 2015 federal election. It is because of this backdrop of events why we feel that the African Canadian community is at a critical crossroad.”

The aim was to forge a community-driven, evidenced-based and solutions-focused response to some of the most pressing issues affecting the African Canadian community.

These issues include high rates of socio-economic disadvantage in a number of areas including, poverty, education, child welfare, employment, health and criminal justice.

The summit was about continuing to move forward with the aim of bringing meaningful and sustainable change for African Canadian youth, families and the community as a whole. To this end, the thematic pillars of the summit were: violence reduction, equity in outcomes and reducing disparities, and good jobs for African Canadians.

Among the several key recommendations from the summit are that the Toronto Police Service should abolish carding and that any other police service in the GTA with a similar practice to carding should also abolish these practices.

“Police Services should be forbidden from engaging civilians to extract and store their personal information in a database without triggering civilians’ attendant Charter rights. If carding is to continue, officers must be required to inform individuals of their right not to give their information to officers if they are not involved in or suspected of being involved in criminal activity. This right must also be fully respected by police when exercised. A carbon copy receipt of the information taken and stored by the police should always be given to civilians who are stopped. All data currently in the Toronto Police Services (TPS) database should be reviewed and expunged where the data reveals no material or relevant connection to an incidence of crime. Finally, all officers who violate the carding policy of the TPS should be disciplined and the public should be made aware of such instances,” it said.

Another recommendation calls on the Ontario Government to “immediately undertake a thorough review into the merits of adopting anti-racial profiling legislation. This review should include a thorough inquiry into the effectiveness of TAVIS and PAVIS, with specific concentration on and prioritizing of the human rights guarantees protected in the Code and the Charter.”

On the matter of child welfare services, they recommend the implementation of an African Canadian Child Welfare Intervention Program to assist African Canadian families develop successful plans of care prior to Children’s Aid initiating apprehension proceedings.

“Children’s Aid Societies must develop, in collaboration with the African Canadian community, indicators that will provide guidance to their Social Workers on situations where consultations with African Canadian agencies and experts are required at each step in the child protection system,” said another recommendation.

Organizers said, that in light of the Toronto Star’s findings confirming an over-representation of African Canadian children in care, it is time for the African Canadian community to have its own Children’s’ Aid Society as is the case with the Jewish community, the First Nations community and the Catholic community in Ontario.

Regarding youth employment and opportunities, they noted that short-term programming is not enough and is not effective. They are calling for multi-year substantive and meaningful resources and programming from all levels of government as the only path to long-term, sustainable change for Black youth.

Another recommendation is to create a culturally responsive and comprehensive program that provides a full range of mental health and counseling services to African Canadians that will focus on trauma, substance abuse, violence and other matters which have a detrimental impact on the mental health of African Canadians.

The summit noted that unemployment and underemployment within the African Canadian community is a chronic barrier to the sustainable economic development of the community.

This is an increasing concern given the plummeting availability of manufacturing opportunities in Ontario, coupled with a significant shift towards an economy based on science, technology, engineering and math.

“African Canadians experience direct and systemic anti-Black racism at all levels of the labour market. This plays an important role in the over-representation of African Canadians in precarious jobs which feature low wages, little to no benefits and a lack of security within job opportunities which tend to feature greater occupational hazards and risk of harm,” organizers noted.

They said, that to enable the African Canadian community to take advantage of ongoing shifts in Ontario’s labour market and economy, decisive action needs to be undertaken to ensure greater access to appropriate skills and job training opportunities for African Canadian workers.

This requires an action plan for preparing members of the African Canadian community to take full advantage of opportunities that are currently in demand and which will drive Ontario and Canada’s economy into the future.