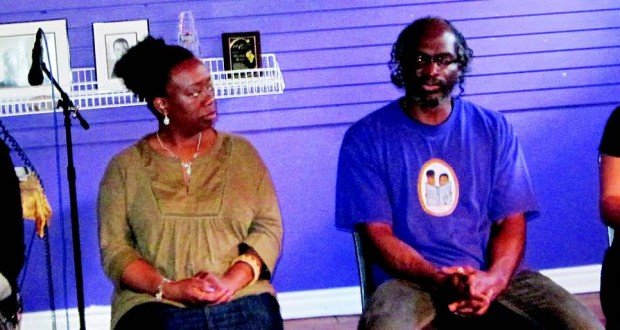 BRAMPTON, Ontario – Canadian authors were out on the weekend demonstrating their support for independent bookstores across the country during Canada’s first Authors for Indies Day.

The event was held on May 2, involving many authors and book lovers around the country.

“Independent bookstores enrich our communities. They provide gathering places for discovering new authors, sharing favourite books, and expanding our horizons. Store managers are thoughtful curators, bringing in books they know customers will love. Our neighbourhoods would be much diminished without our local bookstores,” says Ann-Marie MacDonald, a celebrated author who endorses the event.

She invited people to: “Bring the family. Chat with us, reader to reader, about the books and authors you love and we’ll tell you about the ones we love. Most of all, come and get to know your local bookstore.”

Rosemary Sadlier was at Another Story Bookshop on Roncesvalle Avenue and Akhaji Zakiya was at Glad Day Bookshop on Yonge Street.

“It just means that, one, independent authors get some attention and some spotlight, and secondly, and more importantly, that there is a wider scope of content that people have access to so that you don’t have the same media companies controlling all of the content that comes out,” says author and poet, Jelani Nias.

He says the event is egalitarian and gives people who might normally get shut down, the chance to express and create, and put it out there for other people to consume.

His sci-fi fantasy novel, “Where Eagles Crawl and Men Fly,” is about a so-called bad man who tries to change his life by moving to paradise. When he gets there, he finds that although the change might have been good for his soul it also endangers his life, because paradise has other things going on.

Children’s book author, Angelot Ndongmo, says a day like this is necessary because “we really don’t have enough of our own media outlets to get out there so this is, like, hugely supportive to the author who has a story to tell but just doesn’t have the means of really reaching their audience.”

The author of the books, “Boy, I’m Loving Me” and “Loving Me” says she grew up in Ottawa and struggled with her identity.

“The more I learnt about myself, my community, I thought you know there is just basic simple things that our children really need to learn in order to start having a strong sense of who they are and really appreciating that they are unique on purpose. So I decided to actually create a girl’s book.”

The book, “Loving Me,” was well received by parents who asked what about the boys so Ndongmo created the boys version as well. She also has a song, “The Loving Me Song,” which is available on iTunes.

Musaba Chailunga, author, says the day is very important and it is good that the bookstore exists because it supports independent publishers.

“Now, that has been done before; people have tried to do that before but I have a software development background where I borrowed a methodology – object-oriented development – and that methodology I married with free markets so that we can accelerate the process of eliminating or elevating poverty in rural communities.”

Another author, Bill M. Burton, says it is great for people of colour to get together and to express their views in the books that they wrote.

His poetry book, “Poetry in Action,” was written to “uplift those who need to be uplifted; to get them going to follow their dreams and make it come true.”

There was also a panel, How to Raise a Reader, featuring Marina Willats, a vice-principal in Peel; Sean Liburd, owner of Knowledge Bookstore; Natasha Henry, author of history books; and Jael Richardson, author. It was moderated by Leonicka Valcius.

Richardson, artistic director of the Festival of Literary Diversity (FOLD), a three-day event that will take place in May 2016 in downtown Brampton, says the festival will celebrate diverse authors and stories and include panels, book readings and workshops.

Aiming to develop a community of writers and readers with the festival, Richardson says the idea came after she wrote a book that she thought was very good but it did not get the type of publicity that she thought it deserved, or needed, in order to have a chance.

“One of the areas that I thought, in particular, was festivals. There is limited space in festivals and often publicists will push certain kinds of books that they think are more likely to get picked up. And I wanted to create a space where diverse authors coming out with a book would be automatically at the top of the list and where they could be the experts,” she said. The primary venue for the festival will be the Peel Art Gallery and Museum.

Carolette Liburd and Sean Liburd, co-owners of the bookstore, love the idea of such a day.

Sean chimed in, “The concept of Authors for Indies is a really beautiful concept because the authors are supposed to come in the store and actually help the booksellers to sell by recommending books, sharing their favourite anecdotes and their favorite books and so forth. It’s all about the authors working with the bookstore that day to focus on the bookstore and show how important the independent bookstore is what they are doing.”

The goals of Authors for Indies are to: increase customer traffic, raise awareness of the importance of independent bookstores, strengthen relationships between authors and booksellers, and showcase local writers.

Inspired by the hugely successful Indies First campaign in the United States, the event started out as a BC-based initiative.

With help from publishers, the B.C. Booksellers Association, the

Vancouver Writers’ Festival, and the Retail Council of Canada, the movement has spread across the country, with more than 500 authors and 130 bookstores already signed up.

The event has attracted the support of other bestselling Canadian authors such as Joseph Boyden,Cathy Marie Buchanan, and Terry Fallis.