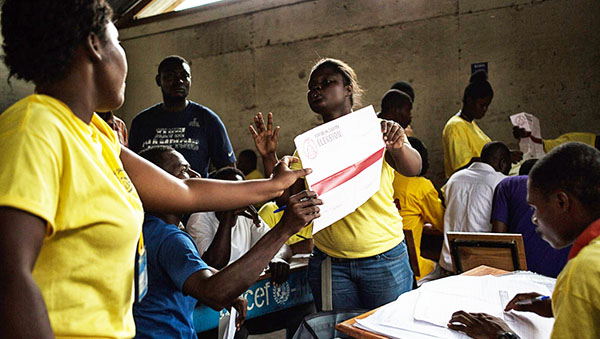 Photo above: officials in Haiti begin counting ballots at the end of polling on election day, on August 9, 2015. Photo credit: UN/MINUSTAH/Logan Abassi.

UNITED NATIONS, New York Mar 19, (CMC) – A day after the United Nations top official in Haiti said, Haiti’s only path to institutional and political stability is by going to the polls, the UN Security Council has called on Haiti authorities to complete elections “without further delay”.

In briefing the Security Council on Thursday, the Special Representative of the Secretary-General and head of the UN Stabilization Mission in Haiti (MINUSTAH), Trinidad-born Sandra Honoré, said, a protracted political crisis in Haiti may hamper the stabilization gains achieved in recent years and further decline the nation’s economic growth.

Deeply concerned by the continued suspension of electoral rounds in Haiti, the Security Council, yesterday, called for the completion of the polling cycle “without further delay, to allow the Haitian people the opportunity to vote for their elected representatives in a free, fair, inclusive and transparent contest”.

The Council noted, the February 5 political accord, which it said provided a Haiti-led and owned road map for the swift conclusion of the current electoral cycle.

It strongly urged all relevant actors to adhere to the accord and implement its provisions within the agreed timeline, underscoring the importance of formally reinstituting the Provisional Electoral Council in this regard.

On February 14, the Haitian National Assembly elected Jocelerme Privert as the French-speaking Caribbean country’s interim President, one week after former President, Michel Martelly, departed without a successor being elected.

Privert will serve as interim President for 120 days, with an election scheduled for April 24, following an agreement – known as the February 5 Agreement– between Haitian stakeholders “to preserve institutional continuity and further the electoral process,” the UN said.

Security Council members further noted, the increasing number of challenges Haiti faces, “which can only be effectively resolved through close coordination between a democratically-elected government and Haiti’s international partners.”

Reiterating their strong condemnation of any attempt to destabilize the electoral process, in particular through violence, the Council urged all candidates, their supporters, political parties and other political actors to “remain calm, refrain from violence or any action that can further disrupt the process and political stability.”

The Security Council also urged stakeholders to resolve any electoral disputes through constructive engagement and the appropriate legal mechanisms.

Additionally, the Security Council urged the Haiti government to hold accountable “those responsible for any violence.”

The members of the Council commended the Haitian National Police, with support from MINUSTAH, for their efforts in maintaining peace and protecting the civilian population.