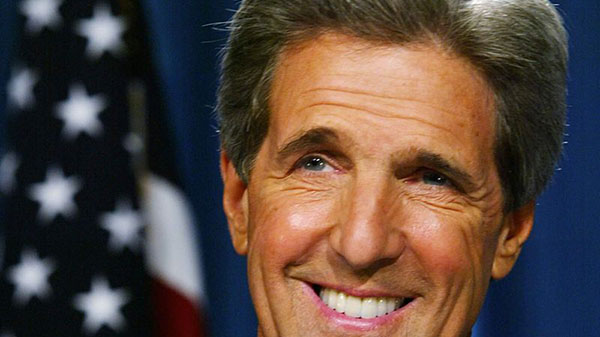 US Secretary of State, John Kerry.

By Nelson A. King
CMC Correspondent

WASHINGTON, DC May 5, (CMC) – United States Secretary of State, John Kerry, has identified what he regarded as three priority areas in which the Obama administration would like the economies of Latin America and the Caribbean to grow and thrive.

Addressing the Council of the Americas’46th Annual Washington Conference of the Americas/US-Caribbean-Central American Energy Summit Reception, on Tuesday night, Kerry said these areas are trade, supporting entrepreneurs and innovators, and promoting accountability and transparency in government institutions.

“The fact is that, if we want the economies of Latin America and of the Caribbean to grow and thrive tomorrow, then we’re going to have to make the right choices now, today, (not) tomorrow,” Kerry told the reception, here, that included regional Prime Ministers and representatives.

Among the attendees were Prime Minister, Andrew Holness, of Jamaica and Prime Minister, Dr. Keith Rowley, of Trinidad and Tobago, “who are both making their first official trip to Washington in those capacities,” Kerry said.

Stating that trade was the US’s number one priority, Kerry said the best way to nurture prosperity and economic opportunity for all, is to extend the benefits of free and open trade, and investment across the entire hemisphere.

He noted that the United States now has free trade agreements with a dozen countries in the region – “more than we have in any other part of the globe.”

“And I will tell you, as a senator, I spent28 years-plus in the [US] Senate and succeeded in winning my party’s nomination even as I supported the trade agreements,” Kerry said.

“Why? Because I believed, and I believe now even more, as does President Obama, if 95 per cent for the United States of America in an economy our size – 95 per cent of the customers of the world live in other countries, and no one is going to grow by trading with themselves alone.

“And we’ve been in that place where you begin to put the high tariffs in place and you prevent the capacity of competitiveness and of hard work and ingenuity to take hold by putting in place artificial barriers. That’s a stomp on creativity, and it prevents the capacity to go forward,” the US Secretary of State added.

He said Washington is committed to transforming the Americas, including the Caribbean, into an “open, integrated platform for global success”.

“That’s how you create and support jobs, and that is how we encourage innovation, and that’s how we drive growth,” he added.

But while expanding trade among nations, Kerry said it was important to focus on the second priority: supporting entrepreneurs and supporting innovators “as they strive to get their businesses up and running.”

With this model in mind, Kerry said US President Barack Obama launched the Small Business Network of the Americas, “to connect thousands of small business service providers throughout the hemisphere.”

“Now, economic experts agree that new businesses are a major source of new jobs, but our policies ought to reflect that by smoothing the way for people, who have a good idea, to be able to translate that idea into a company that will strengthen communities and build prosperity, one step at a time,” Kerry said.

On the promotion of accountability and transparency in government institutions, he said “now more than ever, citizens all around the world are making clear to everybody that corruption is not going to be tolerated.”

Kerry said corruption as a whole “robs the future of a country.

“It steals not just money from citizens; it steals their trust in government. It steals their sense of their national wealth. There are some countries in some parts of the world where I can tell you there are just tens of billions of dollars squirreled away in bank accounts that somehow they get to do. And these are people on a public payroll, yet they’re billionaires at the expense of their nation.”

“And it disadvantages all those businesses that don’t want to pay a bribe or can’t pay a bribe that want to have a fair shake on the competitive playing field,” he said, adding, however, that “the good news is that more and more citizens all around the world are saying “nomas” to that – not anymore, none – and they’re stopping it, and they’re working to increase openness, to increase accountability and hold leaders to a higher standard.”

Kerry, therefore, urged attendees to help in creating a higher standard of accountability, stating that that includes the private sector.

He said it was sanguine that corporations do their part to ensure that laws – “not sweetheart relationships, but laws –actually shape decisions, and that investigations into wrongdoing are actually independent and that contracts are won, not based on how much you pay somebody under the table, but on the merits of how people in the country are going to benefit by whatever the product or the company does.”

While stating that renewable energy is the future and is growing, Kerry announced that the United States Aid for International Development (USAID) funding, associated with the Caribbean and Central American renewable energy projects, was going to come online on Wednesday.

“And we’re going to begin taking project applications right away in order to support this kind of energy and future and investment,” he said.

“And every one of us, I think, should take note of the fact that the Caribbean and Central American nations continue to pursue legal, regulatory and policy reforms. They’re going to modernize and integrate their energy systems and make private sector clean energy more attractive in all of those places,” Kerry added.

As part of his visit to the US, Rowley will address a reception, Thursday evening at the predominantly Black Medgar Evers College, City University of New York, in Central Brooklyn, where most students were either born in the Caribbean or are of Caribbean heritage.