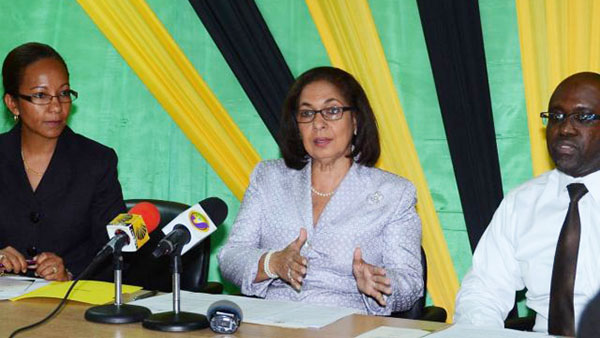 Labour and Social Security Minister, Shahine Robinson (centre), responds to a question during a press conference at the Ministry’s North Street Headquarters in Kingston on May 17, to clarify media reports surrounding the death of Sheldon McKenzie, who was employed in Canada under the Seasonal Agriculture Workers’ Program (SAWP). She is flanked by Permanent Secretary in the Ministry, Colette Roberts Risden (left); and Chief Technical Director of the Labour Division, Damian Cox. Photo credit: Melroy Sterling/JIS.

KINGSTON, Jamaica May 19, (JIS) — Labour and Social Security Minister, Shahine Robinson, says that the welfare of workers, involved in overseas programs, is of paramount importance to the government.

She gave the assurance at a press conference at the Ministry’s North Street headquarters in Kingston on May 17, to refute media reports surrounding the death of Jamaican farm worker, Sheldon McKenzie.

McKenzie, who was employed to DiCiocco Farms in Canada, under the Seasonal Agriculture Workers’ Program (SAWP), died in September 2015, after suffering an injury on the job.

Reports are that McKenzie’s family in Canada, prior to his death, was being requested to send him back home to the island, allegedly by the Jamaican Liaison Service in Canada.

However, the Minister has denied the reports. “The Ministry would like to make it clear that the decision of any injured worker to leave medical care and return home to Jamaica would be a decision between that worker and his medical doctor,” Minister Robinson said.

“The Jamaican Liaison Service does not make medical decisions and is, at all times, concerned about the welfare of Jamaican workers employed in overseas program,” she added.

The Minister noted that the “liaison service was, at all material times, doing its best in the interest of Mr. McKenzie and his family.”

She said McKenzie was visited frequently by a liaison officer while he was hospitalised, and that a teleconference was held in February 2015, which included his medical team and relatives.

Minister Robinson extended condolences to McKenzie’s family, noting that the Ministry’s Welfare Department continues to be engaged and concerned about their welfare.

The Labour and Social Security Minister used the opportunity to laud McKenzie for his 12 years of service to the SAWP and described him as a “valued and conscientious worker.”