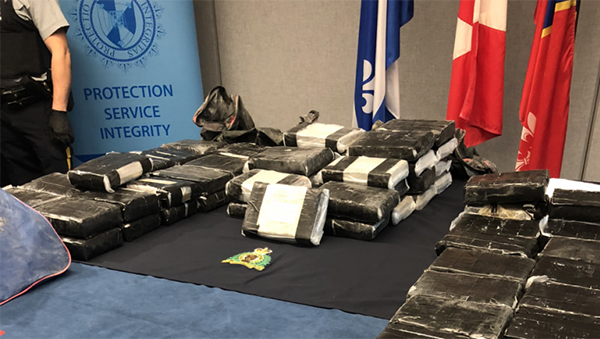 In a statement, yesterday, the security officials said that during a joint operation, conducted last week, 81 kilograms of cocaine was found, and seized, abroad a cargo vessel that arrived from Guyana.

The vessel, Jacqueline C, is suspected to have left Guyana from Linden.

According to the Canadian authorities, the drug was concealed in the hold of the vessel.

The vessel was reportedly being monitored and after its arrival at the port, the crew members were searched, then a thorough search of the ship was conducted.

The cocaine was found stashed in bags in the hold of the ship.

Four people were initially arrested, two of whom were charged with conspiracy to import drugs for the purpose of trafficking.

The two, who have been charged, have been identified as Roldan De Gorio Tito,36, and Nazir Ahmad Hussain, 48. Hussain is believed to be a Guyanese national.

The investigation is ongoing and the Canadian authorities believe that the seized drug was heading for the Toronto and Vancouver markets.