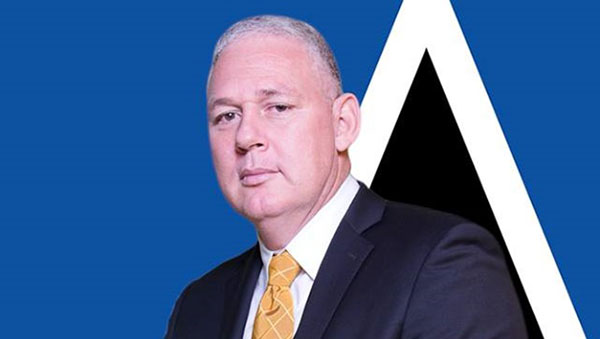 CASTRIES, St. Lucia, June 14, (CMC) – Prime Minister, Allen Chastanet, yesterday, named a 15-member Cabinet that includes a former prime minister as well as a former acting police commissioner, and promised St. Lucians that while his new administration would be “firm” it would also be “sensitive” to their cause for socio-economic development.

“This evening is a very important milestone in my new government, “Chastanet said at the open air ceremony, held in the southern town of Vieux Fort and attended by Prime Minister, Dr. Keith Mitchell, of Grenada, his counterpart from St. Kitts-Nevis, Dr. Timothy Harris, and the former St. Vincent and the Grenadines prime minister, Sir James Mitchell. The Vice President of Martinique, Yans Monplasir was also in attendance.

Chastanet, 54, said that he had cut the number of ministries from 14 to eight and “we must look to empower the skills of our people and make them competitive in the world”.

He warned that his administration, which would be “firm but sensitive” would not engage in a witch-hunt, insisting that there are too many challenges facing the island, including high unemployment and poverty.

Chastanet noted it was important to have held the ceremony in Vieux Fort, reminding the audience that the journey to the government began with the “People’s Parliament” and that the south, while it had the potential for development still had the highest unemployment figures in the country.

Apart from heading the government, Chastanet will also be responsible for Tourism, Finance, Economic Growth, External Affairs, Public Service and Job growth. He did not name an Attorney General.

Former Opposition Leader, Dr. Gail Rigobert, a former lecturer in International Relations at the St. Augustine campus of the University of the West Indies, has been named Minister of Education, Innovation, Gender Relations and Sustainable Development

Chastanet, who led the United Workers Party (UWP) to victory in the June 6 general election, also named former trade unionist, Mary Isaac, to his cabinet that also includes Dr. Ubaldus Raymond, who resigned as Parliamentary Secretary in the Ministry of Commerce, Business Development, Investment and Consumer Affairs in the former Dr. Kenny Anthony administration as the Minister in the Ministry of Finance.

Isaac will head the Ministry of Health and Wellness.

Stephenson King, who became the sixth prime minister following the death of Sir John Compton in 2007, will now serve as Minister of Infrastructure, Energy and Labour, while Hermangild Francis, a former top cop, is the Minister of National Security, Justice and Home Affairs.

Leonard Montoute, a former minister, who was among those defeated in the 2011 general election, returns as the Minister of Sports, Equity, Social Justice, Youth and Local Government.

In his address, Chastanet said that it would be wrong for the new government to “forget where we came from,” adding “we would all not be standing here if it were not for you and I thank you.

“This country must go through a massive transformation,” Chastanet said, promising that his UWP administration is well equipped to do so.

The following is the new St. Lucia Cabinet.

Bradley Felix – Minister in the Office of the Prime Minister with responsibility for Commerce, Industry, Consumer Affairs.

Dominic Fedee – Minister in the Office of the Prime Minister with responsibility for Tourism, Information and Broadcasting.