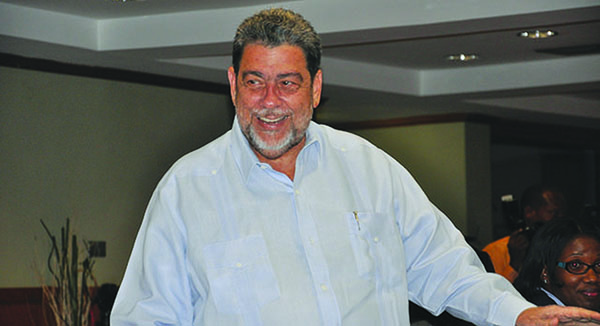 KINGSTOWN, St. Vincent, CMC – A muscle injury has “seriously affected” the mobility of Prime Minister Dr. Ralph Gonsalves, and could see him travelling to Cuba for treatment, his office announced on Monday.

“Prime Minister Dr. Ralph Gonsalves has sustained a muscular injury to his right thigh which has seriously affected his mobility. The muscle that is injured is called the rectus femoris,” the statement said.

It said Gonsalves, 68, who has been head of government since 2001, is being treated here by a team of medical experts, including orthopaedic surgeon Dr. Charles Woods, physiotherapist Denis Byam, and Gonsalves’ personal physician, Dr. Elsworth Charles.

“The medical team has advised Prime Minister Gonsalves that recovery from this illness cannot be unduly rushed. He has been further advised to seek treatment abroad, and he is examining the possibility of treatment in Havana,” the statement said, adding that “more information on this development will be released as it comes to hand”.

As a result of the injury, changes have been made to the delegation attending the 69th General Assembly of the United Nations. Prime Minister Gonsalves and his wife, Eloise Gonsalves, will no longer be part of the delegation.

Instead, his son, Foreign Affairs Minister Camillo Gonsalves, will head the delegation, and will deliver the country’s address to the UN on Saturday.

It said Gonsalves will conduct all scheduled bi-lateral meetings, and will represent the Prime Minister at all related meetings, including a panel discussion to be hosted by the United States Congressional Black Caucus, scheduled for Friday in Washington DC.

In April, the Prime Minister was confined to his official residence, for rest and recuperation as a result of an injury to his ankle.

In May, two weeks after he was ordered to rest, Gonsalves underwent a surgical procedure in Europe to correct a “niggling pain”.

“You may recall two years ago that on my way to the Middle East I developed a problem and had to seek medical attention in Barbados. And I had a small surgical procedure done.

“Well, I felt a few weeks ago a niggling pain where the procedure was done, and I went to the person who did it in Barbados, and he reviewed it and said to me that he understands what has happened, and he’d have to do another minor procedure at the same place,” he later told reporters.

In July, he was seen walking with a slight limp, and told reporters that the problem was his knee.