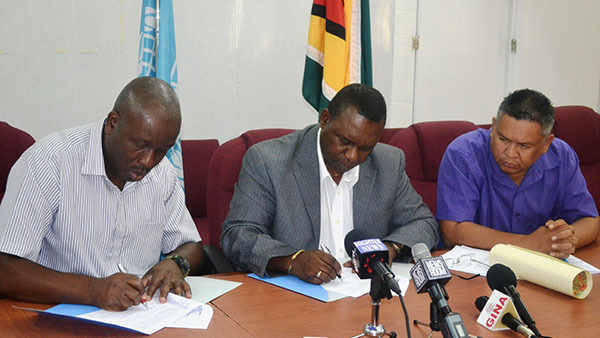 Permanent Secretary of the Ministry of Agriculture, George Jervis, and FAO Country Representative, Reuben Robertson, accompanied by the CFO, Denzil Roberts, while signing the PSMA.

GEORGETOWN, Guyana, September 14, 2016 (CMC) – Guyana has signed an agreement with the United Nations Food and Agriculture Organisation (FAO) that will allow the country to prevent, deter and eliminate illegal, unreported and unregulated (IUU) fishing in its territorial waters,

The Port State Measures Agreement (PSMA) includes technical assistance and a monitoring and evaluation process and the US$500, 000 project is expected to be completed within the next 18 months.

A statement issued, here, said that when these processes are implemented, Guyana will benefit tremendously as the measures will ensure that the country maintains its fish stock.

Guyana will now be able to integrate and coordinate fisheries-related Port State Measures with the broader system of Port State controls.

“It is important to note that Guyana has a series of systemic, closed fishing seasons where trawlers are prohibited,” said Permanent Secretary for the Ministry of Agriculture, George Jervis.

“However, the fact is that it is quite common all over the world that persons do not abide by these rules and regulations. If we do not take control of this, it will get out of control. They may harvest the fish stock at a time when Guyana’s industry does not consider it mature,” Jervis added.

The fishing industry is one of the most important contributing sectors to Guyana’s revenue as the country exports more than 60 per cent of its catch. The industry is responsible for the livelihood of approximately 15,000 people and their families.

During his 2016 budget speech, Agriculture Minister, Noel Holder, revealed that in 2015, the marine sub-sector raised revenue estimated at GUY25.4 million (One Guyana dollar =US$0.004 cents)  and recorded exports US$71 million.

FAO Country Representative to Guyana, Reuben Robertson, said the organisation would be providing technical assistance to Guyana to assist in the fight against IUU fishing.

“During a capacity-building workshop, which was held in April of this year, stakeholders recognised that there was a piece of legislation regarding the fishing industry (Fisheries Act No. 12 of 2002) that needed strengthening. It was during this workshop that participants were able to identify key gaps in the national legislation and regulations of the provisions of the PSMA,” Robertson said.

The Port State Measures Agreement (PSMA) was approved by the FAO Conference at its 36th Session in Rome under Article XIV of the FAO Constitution in 2009.

The aim of this agreement is to prevent IUU-caught fish from entering international markets through implementation of harmonised measures by countries and through regional fisheries management organisations.

To date, 33 states including the US, Canada and France have already signed on to PSMA.