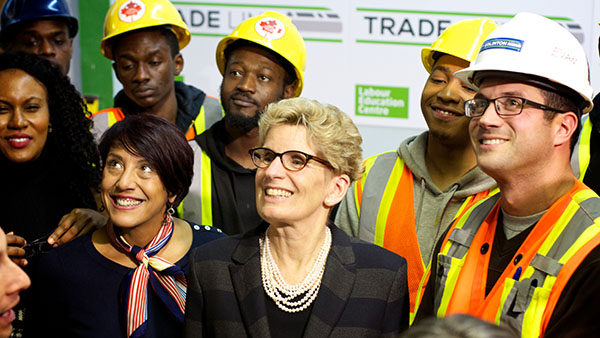 Ontario Premier Kathleen Wynne, seen with minority prospects, after announcing, on December 7, last year, that 10% of working hours created with the Crosstown transit project would go to members of the local neighborhood. Photo contributed.

TORONTO, Ontario March 6, 2017 — Last year, on December 7, a court in Toronto convicted one of the shooters from the 2012 Danzig tragedy. He was 17 at the time he pulled the trigger, and the incident sparked a massive debate about youth violence and how to address it.

In a column shortly after, Globe and Mail columnist, John Lorinc, posed a question: if there are many young black males who don’t see a future for themselves and fall into destructive lifestyles, but at the same time we will need thousands of workers to build the massive transit projects in Toronto, why can’t someone put those things together and come up with a plan?

Four years later, on December 7, 2016, the same day as the Danzig shooter’s conviction, Ontario Premier, Kathleen Wynne, was joined by four of her Cabinet colleagues for an announcement about a unique agreement for “Community Benefits” for the Eglinton Crosstown transit project — exactly what Lorinc had called for. 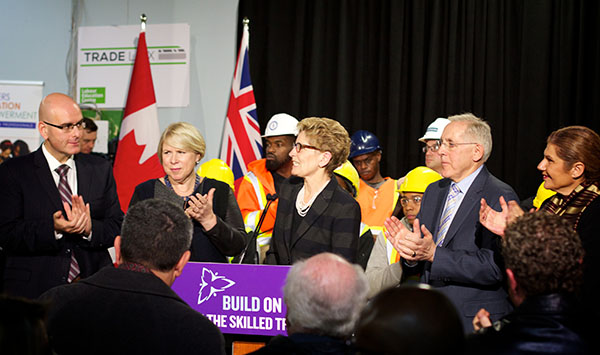 Premier Wynne (at podium) spoke of setting goals of 10 percent of the work hours from the Crosstown transit project to be performed by apprentices or journey-persons from diverse communities. Photo contributed.

The room was crowded with representatives from Metrolinx, the builder, community groups and unions.

Most importantly, a number of young men, who were hoping to enter a career in the trades, sat behind the premier as she spoke of setting goals of 10 percent of the work hours to be performed by apprentices or journeypersons from diverse communities.

This will mean 300 jobs for minorities, and it represented four long years of organizing by the Toronto Community Benefits Network (TCBN), a community-labour coalition that started in the Weston-Mt. Dennis neighbourhood after the Kodak plant closed.

The original focus was to secure jobs for local residents at a planned TTC maintenance garage but, after Metrolinx took over the site as part of the Eglinton Crosstown line, a broader conversation started with their CEO, Bruce McCuaig.

There had already been strong commitment by building trades unions to diversity training. Could that become the part of Metrolinx approach?

“We cannot specify the exact number of jobs that will go to any one particular group among the target populations for community benefits. Target populations include residents in low income neighbourhoods, including Neighbourhood Improvement Areas; urban Aboriginal populations; racialized and newcomer communities; people with disabilities as well as youth and women who are disadvantaged. We know that in Toronto more than half (62%) of all persons living in poverty are from racialized groups, ” said Rosemarie Powell, Executive Director of the TCBN, in an exclusive interview with Pride News Magazine.

The inspiration for the initiative came from Los Angeles, where a referendum passed in 2008 to raise $40 billion for transit funding through a small increase in sales tax. A key piece of the argument by the proponents was that the investment would do double-duty.

As well as bringing much needed rapid transit to poorer areas of the city, there would be careers opened up for African-American and Latino youth in the construction workforce.

A project agreement was put in place that set goals for hiring from historically disadvantaged communities, and a monitoring system created to ensure the goals were met.

The concept of Community Benefit Agreements spread to other cities in the U.S., and has a growing level of support from civic leaders and charitable foundations.

When asked, who, specifically, will be monitoring to ensure that 10% of the jobs goes to minority workers, Powell answered:”TCBN will be at the forefront of monitoring, evaluation and reporting on the community benefits targets. The Declaration states ‘Progress will be tracked quarterly and reported annually. Reflecting the shared accountability for achieving the 10% hiring target, the parties will agree to form a working group, chaired jointly by MAESD, the TCBN and Metrolinx/CTS, and include other stakeholders as appropriate’.”

After the initial Framework Agreement was signed between Metrolix and TCBN, the government of Ontario introduced legislation to require large infrastructure projects to support both apprenticeships and community benefits.

At the federal level, York South Weston MP Ahmed Hussen’s private member’s Bill 227 is making its way through the parliamentary system with the same objective.

There is one significant difference between the U.S. precedents and the agreement reached on the Eglinton project: all of the previous versions addressed blue-collar jobs in the trades.

In Toronto, for the first time, there is an addition of white-collar careers in the professional, administrative and technical occupations associated with the project. 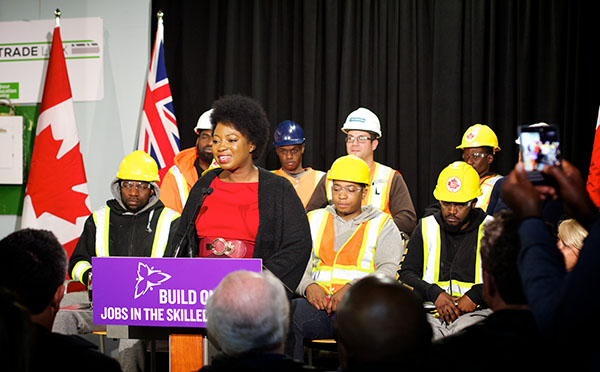 Rosemarie Powell (at podium), Executive Director of the TCBN says,”I am optimistic that this transit build will continue to stir economic activities in the neighbourhood.” Photo contributed.

To date over 40 people from diverse communities – either internationally trained or recent graduates – have been hired. In fact, three of them were in the back of the room, smiling with pride, as the Premier made the announcement on December 7.

There’s really only one unresolved question. It’s in the numerical value of community benefits.

Are the project dollars doing double-duty, or, given that building transit reduces Toronto’s carbon footprint, is this really an innovative investment in shifting to a triple bottom line?

Either way, hundreds of lives are being changed and local economies strengthened.

“I am optimistic that this transit build will continue to stir economic activities in the neighbourhood,” opined TCBN’s Powell.

“Commitment by all stakeholders to community benefits — jobs and opportunities for residents — starting with this transit build, will ensure that residents who get involved and take advantage of the opportunities will have the financial means to continue to live there and help build up their community.”