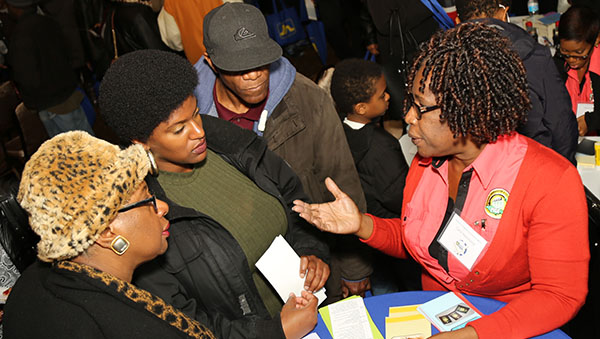 Citizenship Critical To Estate Planning For Jamaicans In Diaspora

BRAMPTON, Ontario March 28, 2017 — Omar’s desire to ensure that he has all the documents he needs to prove his Jamaican citizenship goes beyond mere nostalgia and his need to maintain a cultural tie to his country of birth.

Although he has lived in Canada for more than three decades, he maintains assets in Jamaica; and, therefore, ensuring that his family and children are properly documented as Jamaican citizens, he opines, simply makes good economic sense.

“I have assets in Jamaica; and, if and when my children are born, I want to leave it to them,” the meticulous planner, who declined to give his full name, said as he milled around the Passport Immigration and Citizenship Agency’s (PICA) booth at the JN Group Expo in the Pearson Convention Centre in Brampton, Ontario on March 25.

He was among some 5,000 Jamaicans living in Canada who poured into the Convention Centre to access information about the financial products being offered by the JN Group, and collect printed material for further details, and advice to secure investments in Jamaica.

Without Jamaican citizenship, Omar’s children would have no claim to his assets in Jamaica; and, therefore, it would pass to his nearest kin or relatives living in Jamaica.  Under Jamaican law, nationals living overseas can only will their estate in Jamaica to another Jamaican citizen.

“There are some people living overseas who have estate matters to be settled in Jamaica; however, when their children or grandchildren, who were born and live overseas make a claim, their verification of identity comes up for question,” confirmed Carol Saunders-Hammond, Director of Citizenship Services at PICA.

“There is a document provided by PICA, which outlines the establishment of lineage, for Jamaicans to acquire citizenship by descent, so that it makes the inheritance process a lot easier,” she outlined.

However, beyond managing the estate process, confirming one’s Jamaican heritage also streamlines some processes for many Jamaicans living overseas. To do business in Jamaica, such as opening accounts with local financial institutions, proof of Jamaican citizenship is required; unless, one is a foreign investor, to whom different options are available.

And, she adds, proof of citizenship also allows Jamaicans overseas an opportunity to participate in the decision-making process in Jamaica, when in the country.

“You can identify yourself as a Jamaican, not just to be out there and say I have a claim, but to have a document to say you are Jamaican, so that your voice can carry more weight. For example, you can be fully involved in the decision-making process, if you so desire, by coming home to vote,” Saunders-Hammond said, carefully noting that they would also need to undertake the voter registration process in Jamaica for the right to vote.

Getting more Jamaicans documented, she further explained, also positions the country to better identify the number of Jamaicans overseas to be able to harness their expertise; and it will also assist Jamaicans in the Canadian Diaspora to secure a national identification number, when that system eventually comes to fruition.

The national identification number should be maintained for life; and will allow Jamaicans, wherever they are, to receive benefits to which only Jamaicans citizens are entitled.

“We have talented people in the Diaspora, and we want to invite them home to make their contribution to our country; but, while some want to participate, there is a distance that they need to close between themselves and Jamaica,” she said.

“Confirming that you are a citizen of Jamaica can certainly bring you closer home,” Saunders-Hammond maintained.

“There are a lot of issues for Jamaicans in the Canadian Diaspora, who when they return to Jamaica, they sometimes find their property occupied by somebody they don’t know; or their title has been transferred,” explained Lori-Ann Thompson, Director Business Services at the National Land Agency (NLA), explaining the reason for the agency’s design and launch of its newest service to property owners.

She pointed out that in many cases, the nature of the frauds are identity theft committed by relatives or persons known to the owner.

Registrar of Titles, Cheriese Walcott, noted that although the numbers are not alarming, the issue is one of concern for the NLA. “However, one case is enough for us to have a problem,” she said. 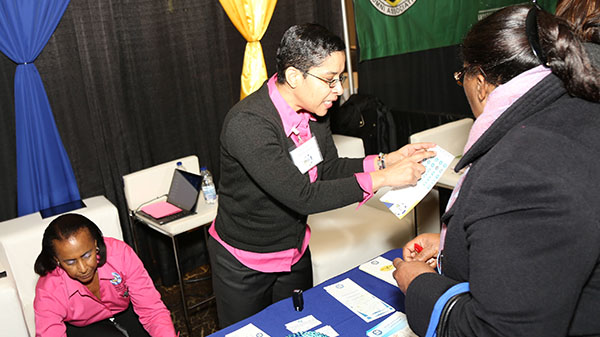 Cheriese Walcott, Registrar of Titles at the National Land Agency, speaks with a patron at the NLA’s booth at the JN Group Expo held at the Pearson Convention Centre in Brampton, Canada on the weekend.

The service is available for registered properties only; and can be accessed by owners, their personal representatives, or attorneys by registering on the agency’s website at www.nla.gov.jm and paying a subscription fee.

Once registered, persons whose property become subject to fraud will be notified by text or email when a transaction has been lodged against the Certificate of Title or multiple Certificates of Title. The victim must then respond within 48 hours to indicate whether they are aware of such a transaction.

“You can go to court to address the problem, but the cost of going to court is expensive. Therefore, if we can ‘catch it’, we will alert you that something is amiss about your property. And, then you can advise the Registrar so that we can put a stop to it,” Thompson said.