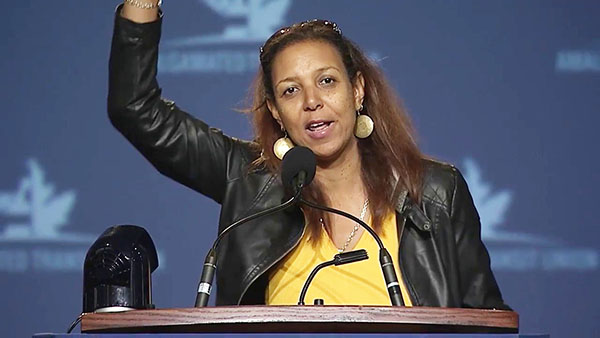 Marie Clarke Walker made history in 2002, when she was elected as the first woman of colour and youngest person to serve as executive vice-president of the Canadian Labour Congress (CLC). Photo contributed.

TORONTO, Ontario April 26, 2017 (PRIDE) — Marie Clarke Walker, executive vice-president of the Canadian Labour Congress, is seeking the traditionally natural elevation from that position at the CLC – to become its next secretary-treasurer.

After 15 years in her position, that opportunity will present itself when she runs for the position at the 28th Constitutional Convention of the CLC, which will be held from May 8 to 12 at the Metro Toronto Convention Centre.

Also running for this position is Ferne Downey, national president of the Alliance of Canadian Cinema, Television and Radio Artists (ACTRA)/United Steelworkers (USW).

The process is dynamic and people have up until 3:00PM, the day before the elections at the convention, to put their names forward. The elections will be held on May 11.

Officers of the organization are elected by secret ballots during this week and serve a three-year term.

Re-elected for the fifth term in the executive vice-president position in May 2014, Clarke Walker – who this year received the African Canadian Achievement Award of Excellence in business — made history in 2002 when she was elected as the first racialized woman and youngest person to serve in that role.

Local unions send delegates to the convention, which is held every three years, with proposed resolutions they present to the floor. The resolutions are debated and policies are adopted.

At the end of the convention, the CLC develops an action plan, based on the resolutions, committee reports and policies discussed amongst the members of the labour movement.

This plan becomes the basis of its work for the next three years, providing a general guide to the activities of the CLC itself, the provincial and territorial federations of labour, local labour councils and affiliated unions. 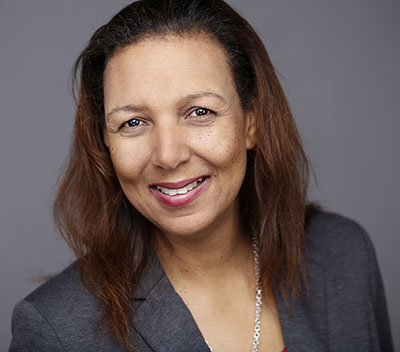 Marie Clark Walker, Executive Vice President of the Canadian Labour Congress, seen in Ottawa, on May 2, 2016. Photo by Blair Gable.

“For the first time in some time, the movement is more relevant to racialized people as they see themselves represented, not only in the folks at the top and on staff, but also by the issues and the inclusion of equity in all the work that we do,” says Clarke Walker.

She is currently responsible for some crucial files in the national labour movement, representing 3.3 million Canadian workers, including equity committees, employment equity, immigration and the International Labour Organization.

She says the CLC does work on human rights and equity all the time, but a lot of the time it has been in silos.

“We’ve really made an effort, in the last three years, to include human rights, equity, in every aspect – in every campaign, in every issue. So, for example, when we’re talking about pensions, you look at the impact of pensions on women, on racialized people, on people with disabilities, who can’t even get into the workforce, rather than just looking at it in isolation.”

On the issue of the environment and climate change, the impact of those on poor communities and on indigenous communities “has been front and centre of the work that we’ve been doing for the last three years,” she says.

Clarke Walker wants to continue that, explaining that there is still a lot to be done.

She says many Canadians would have seen in commercials on television the CLC’s fairness work campaign that talks about “what the labour movement is, what the Canadian Labour Congress is – that has definitely helped our outreach to the public.”

Clarke Walker says she recognizes the funds that the labour movement gets come from its members, via affiliates, whom the members give dues.

She wants to continue to be responsible with those funds and use those finances “to move the labour movement’s priority, which in effect, is the general public’s priority.”

The executive vice-president says nothing that the CLC talks about is just in isolation, in terms of workers, everybody is affected. 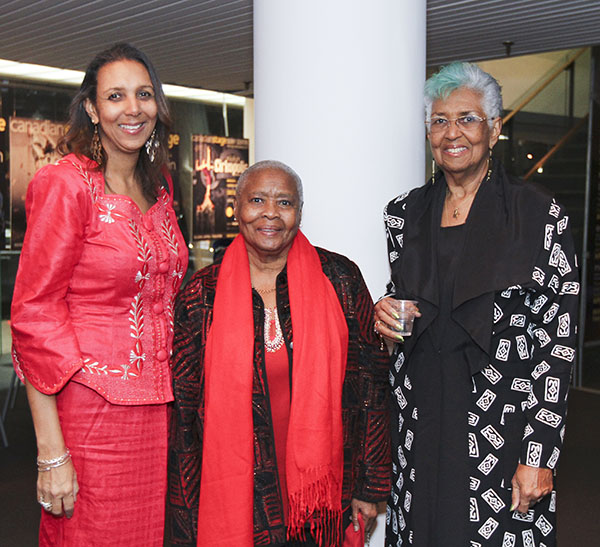 Clarke Walker, left, seen with her mother, Beverley Johnson, right, and a family friend, at the African Canadian Achievement Awards of Excellence (ACAA) gala, in February, where she received an award for excellence in business, for fighting for the rights of workers. Photo courtesy of the ACAA.

Clarke Walker says the labour movement has had some backlash with respect to its relationship with the Liberal government.

Acknowledging that the movement is left of centre and a founding member of the NDP, and she is the Labour vice-president of the federal NDP, she notes that, “at the same time I still have to work with whatever government is there, and the only way you’re going to be able to work effectively is by communicating.”

“And so I’m hoping that we will continue those open lines of communication. We don’t always agree and there’s lots of stuff that we don’t agree on, but if you don’t communicate with them, you can’t get to a consensus point.”

Clarke Walker says she has the experience to do this job and looks forward to another three years of working together with workers, including the unemployed and progressive organizations, to create a more inclusive society.

Her objectives for the position of secretary-treasurer will go out soon and there’s a Facebook page, ‘Marie Clarke Walker for Secretary-Treasurer, CLC’ that has been created by her campaign team. A Twitter page will also be created.

She says the only difference between the position of secretary-treasurer and executive vice-president is the financial responsibility.

“We have, obviously, responsibility for the budget and things like that, to ensure that the finances are used in a responsible way, but other than that it’s the same. The files are given to us by the president who determines what files we get.”

The position reports to the convention and to the council and its statements are audited.

“It’s nothing that I personally have to do, so I will continue to direct staff, continue to administer to my files as assigned by the president.”

The candidates running for the executive vice-president position so far are the incumbent, Donald Lafleur, from the Canadian Union of Postal Workers; Sussanne Skidmore of the B.C. Government and Service Employees’ Union; and Larry Rousseau of the Public Service Alliance of Canada.

The official opening of the convention will be on May 8 but, on May 7, there will be a youth event and a human rights forum in the evening, where Angela Davis, American civil rights activist, author and professor, will be the guest speaker.

There could be anywhere from 2000 to 5000 delegates attending the 28th Constitutional Convention.

“Not to say that it’s all been smooth, because there’ve been elections for all positions in each of those cases. I welcome democracy, I welcome people who want to run, but they need to be running for the right reason.”

She believes that unions are essential democratic organizations for workers in Canada and internationally, in the continuing fight for decent work, safe work conditions, fair wages, social protections, and equality of opportunities and outcomes.

Her assertion is that a strong and thriving labour force drives business and economic growth – and is essential to a shared prosperity for all Canadians.

Clarke Walker started her career working in a home for the elderly, later with adults and children with developmental disabilities, as a counsellor and family-support worker in Toronto and at the school board as an early childhood educator, working with children with disabilities.

Her strong values are well reflected in her personal life. She is the mother of two sons and a mentor/femtor to many.

Clarke Walker — currently an executive member of the Coalition of Black Trade Unionists — has launched a website (www.marie2017clc.weebly.com), in support of her campaign to become the CLC’s next Secretary-Treasurer. 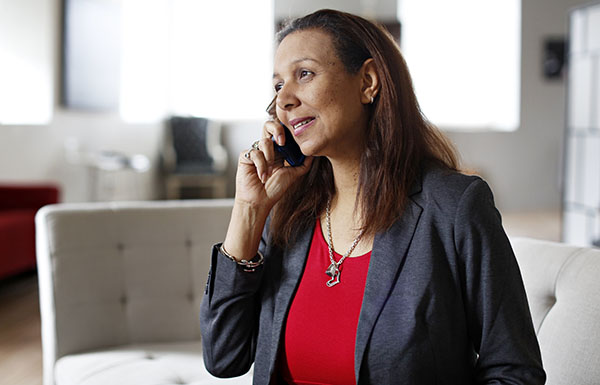 Clark Walker says she is running for the position of CLC secretary-treasurer to continue to build an inclusive movement that is fiscally responsible. Photo by Blair Gable.

Under the heading “Why I am running”, she notes, “We continue to have numerous challenges ahead of us. We continue to have a federal government that has taken every opportunity to break the promises and commitments made to the Indigenous communities and many Canadians during the campaign. We continue to struggle with the impact and the rise of populism, globally, and festering anti-union sentiments, south of the border, that threatens to ooze its way north.

“Our future must be shaped by and for Canadians. Our economy must be sustainable and steered by the needs of workers and their families.”

If elected as secretary-treasurer, she pledges to continue to build an inclusive movement that is fiscally responsible, values the priorities determined by the movement and effectively moves those priorities forward,” adding “The Canadian labour movement……..works hard, each day, to make the lives of all people better.”

Clarke Walker reveals that, as the CLC’s new secretary-treasurer, she plans to continue to build a more inclusive, effective and fiscally-accountable Congress.

“As secretary-treasurer, being the steward of our finances is an essential part of my overall vision, that includes: the education of our members, which is crucial for the advancement of our movement; community organizing, such as town halls and rallies, to listen to and action our member’s concerns; anti-racism and human rights — the combatting of the rise of extremism and hate, and the struggle for equality, and efforts to end discrimination of all kinds must remain one of the pillars that guides our work; and to fight, strenuously, for childcare, housing, pensions, good jobs, respect, justice and fairness.

“All these must play a key role, if we are going to continue to build on the credibility and the positive steps gained from the ‘Fairness Works’ Campaign,” she declared.

Marie Clarke Walker’s passion is just as fervent now as it was when she first became involved in social movements and she continues to fight injustice everywhere, and looks forward to the day when Canada is truly a country which celebrates and respects, equally, all its diverse and vibrant communities.