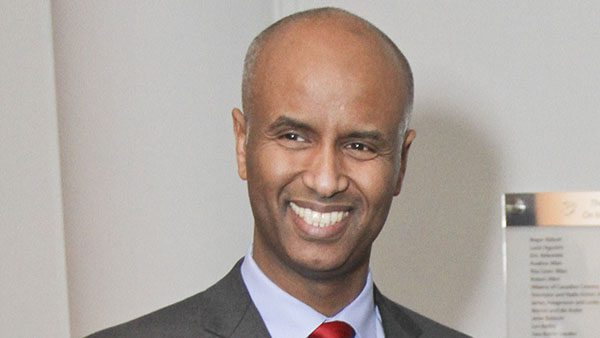 Ahmed Hussen, Canada’s Minister of Immigration, Refugees and Citizenship, said improving the service experience of IRCC clients has been “a significant point of focus for my department in recent years". Photo courtesy of the African Canadian Achievement Awards of Excellence (ACAA).

OTTAWA, Ontario May 8, 2017 (CMC) – The federal government has published regulatory changes, to increase the maximum age of a dependent child, in new applications for all immigration programs.

According to a government statement, the changes will allow more families to stay together, adding that they showcase Ottawa’s commitment to family reunification.

The new age limit of “under 22” will come into effect this fall, on October 24, 2017, raising it from the current “under 19” requirement, said the government in its statement.

The increased age will apply to new applications under Immigration, Refugees and Citizenship Canada, including for refugees.

The government says children, who are 22 years of age or older, and who rely on their parents due to a physical or mental health condition, will continue to be considered dependent children.

“A higher age limit will have more positive social and cultural impacts by keeping families together,” Immigration, Refugees and Citizenship Canada said. “It will also better address humanitarian and safety concerns by enabling more family members of refugees to qualify as dependents.

The immigration agency said increasing the age limit will also help to enhance Canada’s economy, by making it a destination of choice for skilled immigrants, who want to keep their families together.

“Family reunification is a key immigration commitment of the government of Canada,” it said. “The government has made a number of important changes to uphold this commitment.”

Immigration, Refugees and Citizenship Canada said regulations were recently published to eliminate the conditional permanent residence measure “in recognition that most marriages are genuine and to reduce the vulnerability of spouses in the immigration programme.”

Access to the parent and grandparent program was improved, with changes to the 2017 application process, “to make it fairer and more transparent,” the agency said.

It said, in 2016, the number of parent and grandparent sponsorship applications accepted each year for intake was doubled to 10,000 applications.

The Canadian government said processing times for most sponsored spouses and partners would be reduced to 12 months.

“Raising the age of dependents lets more families stay together,” said Ahmed Hussen, Minister of Immigration, Refugees and Citizenship. “This will bring economic and social gains to our country, as it enhances our attractiveness as a destination of choice for immigrants and refugees.”

Hussen said the change is consistent with the global socioeconomic trend for children to stay home longer, including to pursue their post-secondary education.

He added, the change would allow older immigrant children, aged 19 to 21, to study in Canada, “thereby boosting the pool of applicants from which Canadian post-secondary schools can draw talented students”.

“Upon graduation, these individuals would be equipped with a Canadian education and be able to contribute to Canada’s economy,” Hussen said.