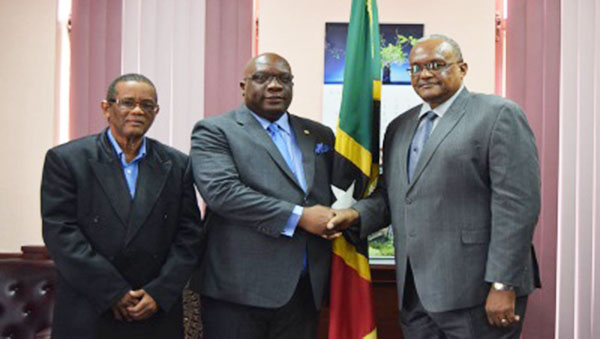 The statement said the appointment of the Jamaican national, who met with Prime Minister, Dr. Timothy Harris, today, was approved by Cabinet, and the retired army chief is here, finalizing his contract and meeting with high-ranking members of the security forces and other stakeholders.

It added that during the meeting with Prime Minister Harris, the retired army official gave “a firm commitment” that he would do all he can to reverse the trend of crime and violence in St. Kitts and Nevis.

“The problem does not exists in St. Kitts and Nevis alone, but it’s a wider Caribbean problem. Your concern however, is for the state, and I appreciate that very much, and I assure you that I shall do everything within my powers, to ensure that this state is brought back to normality,” he said.

The government statement noted that Saunders is a strategic security practitioner and educator with over 40 years of experience at the tactical, operational and strategic levels.

He retired as Chief of Defence Staff of the Jamaica Defence Force in October 2010 and also served as a Permanent Secretary in the Ministry of National Security.

“Major General Saunders has been highly recommended by the Executive Director of CARICOM Implementation Agency for Crime and Security (IMPACS), as well as senior government and military referees in Jamaica, from the agencies where he has worked,” the statement continued.

The Prime Minister, who also serves as Minister of National Security, thanked Saunders for responding to the position of national security advisor.

“You would come to the position knowing that, at this time, there is great anxiety in the community,” Harris said, noting that the twin-island Federation is now in a situation where homicides moved from a single figure in 2005 to a high of 34 in 2011.

He said the Federation “never really turned back, in terms of a double-digit, negative performance with respect to homicides”.

“It is something that the Team Unity administration pledged to the country that we will do all in our power to reverse, and we are still committed to do that.

He gave Saunders an update on some of the initiatives undertaken by the government to stem the criminal activities, including the provision of the largest ever budgetary support to the Ministry of National Security of EC$72 million in the 2017 Budget.

“It means that much has been given, and the public therefore, has reasonable expectations that much will be delivered,” Harris said.