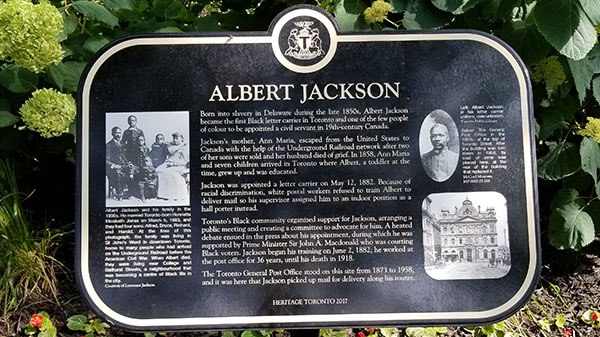 Late last month, Heritage Toronto unveiled a plaque honouring the legacy of Albert Jackson. The plaque, which is located in the courtyard of 26 Lombard Street, depicts the struggle and victory of Albert Jackson for all to see.

TORONTO, Ontario, August 17, 2017 — On May 17, 1882, Albert Jackson was appointed by the federal government to the position of letter carrier, making him Toronto’s, and possibly Canada’s, first Black postman.

Jackson was a former child slave from the USA, who had escaped to Canada, along the Underground Railroad.

As such, Jackson was reassigned by the management to the menial job of hall porter in hopes of defusing, what turned out to be, a very controversial appointment. His duties consisted of opening and closing the front doors for customers, as they entered and exited the post office, cleaning the toilets and more.

This did not defuse the situation and likely contributed to fuelling the response — Toronto’s Black community was galvanized into action on Jackson’s behalf. The community was determined to see Albert Jackson working his mail route and took their demands to then-Prime Minister, John A. Macdonald.

It was an election year, and Prime Minister Macdonald, wanting to please black voters, intervened. On June 2, 188, Jackson was sent out with one of the letter carriers to learn his new job.

This began his career as the first known Black postman in Toronto. Albert Jackson remained with the post office until his death on January 14th, 1918 — after 36 years of service.

In February 2012, the Toronto Star ran a full-page article on the Albert Jackson saga, which brought him to the attention of the Canadian Union of Postal Workers (CUPW). This resulted in CUPW commemorating the memory of Jackson, by presenting the Jackson family (some of whom still work for Canada Post today) with a commemorative poster, recognizing the contributions he made to Canadian history. The poster was also sent out to the 52000 union members, across Canada, in time for Black History month the same year.

More recently, in July 2015, in conjunction with the Pan Am Games, Appledore Productions presented a street-theatrical production entitled “The Postman”.

The play — which took place on the front porches of several homes along Brunswick avenue in Toronto — featured Albert Jackson and the struggles he faced, in order to deliver his route. These homes, some of the which Jackson once owned, were part of his route.

Not long after the completion of the play, the City of Toronto renamed a laneway, near one of the homes he owned, to Albert Jackson Lane. This took place as a book entitled “The story of Albert Jackson, Toronto’s First Black Letter Carrier”, was in the works. The book which was inspired by the children of Clinton Public School was soon published by A Different Publisher in Toronto.

Late last month, Heritage Toronto unveiled a plaque honouring the legacy of Albert Jackson. The plaque, which is located in the courtyard of 26 Lombard Street, depicts the struggle and victory of Albert Jackson for all to see. 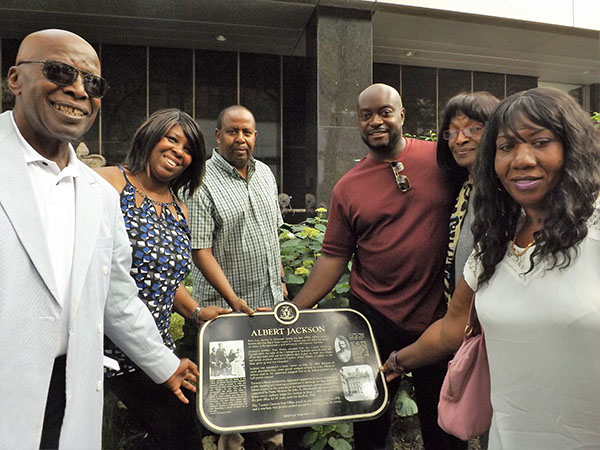 Mark Brown , the author (third from right), seen with descendants of Albert Jackson at the recent unveiling of the plague that commemorates his life.

“I would like to think that Albert Jackson helped pave the way for these generations that followed,” said Shawne Jackson-Troiano a descendent of Albert Jackson.

She was referring to the successful elections of Jan Simpson, Megan Whitfield and Mark Brown (author of this article), who were among the first Black postal workers elected to high-level leadership positions within the Canadian Union of Postal Workers.

On the surface, the Albert Jackson struggle appears to be a depiction about one man who was wronged by his employer; wronged by a society that held one race superior, while another inferior.

When we unwrap the Albert Jackson struggle, it reveals a picture about who we were as workers, as a society and as a nation at that moment in time. The Albert Jackson saga is described by some as a recap of a fierce battle and a great victory.

Others draw attention to its portrayal of a community that, after becoming aware that Toronto and possibly Canada’s first Black letter carrier (their letter carrier) was not permitted to deliver his route, solely because of the colour of his skin, much of the community knew that that was not right.

The Albert Jackson saga is viewed by many as a struggle for dignity, fairness and respect in the work place — an illustration of perseverance and dedication, despite not being able to see the light at the end of the tunnel.

Some describe it as an example of what a people with a clear vision, with an unending determination to achieve what is right, can accomplish. Few would dispute that the Albert Jackson saga depicts a community, rallying around a common belief that this country is at its best (not its weakest) when everyone gets a fair shot at equal access to opportunities and everyone is playing by the same rules.

The Albert Jackson saga drew strength from Toronto’s Black community in ways that many could not have imagined. Many African Canadians believe that they could not be where they are today, if it was not for the struggle that Albert Jackson, and others like him, experienced and the movement that those struggles inspired.

Who could have known, that because of this particular victory over 100 years ago, Canada (while it is not yet perfect) would be a little more inclusive as a result.

The community at that time, could not have anticipated that centuries after that particular struggle was over, generations of postal workers and others throughout the community, would stand where they stood, seeing a piece of history, remembering a great man, an epic struggle and a great movement.