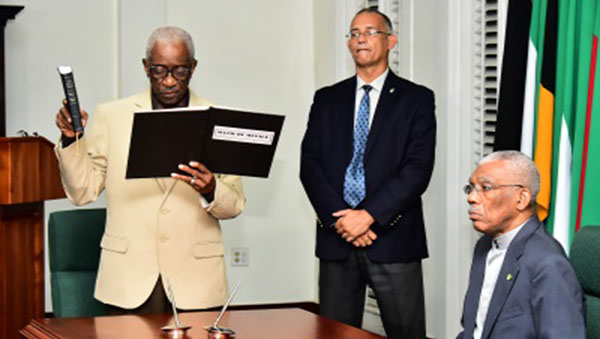 GEORGETOWN, Guyana, October 20, 2017 (CMC) – A former chief justice of Grenada was sworn in as the new chairman of the Guyana Elections Commission (GECOM) last night, ending months of bickering between President, David Granger, and Opposition Leader, Bharrat Jagdeo, over a replacement for Dr. Steve Surujbally, who retired last November.

Retired Justice James Patterson, who became a lawyer in 1964 and served as director of public prosecution, here, in 1972 before taking up the position of Chief Justice of Grenada in 1987, took the oath of office at a ceremony before President Granger.

Jagdeo had, at one stage, threatened legal action over the non-appointment of a GECOM chairman after President Granger had, on two previous occasions, declined to accept the names presented by the Opposition Leader as possible replacements. 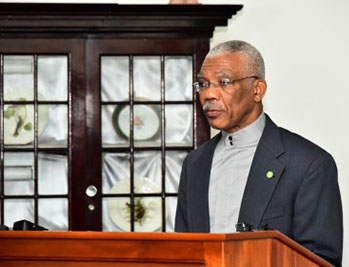 A government statement, Thursday night, said that Granger had placed “reliance on the ruling of Chief Justice, Madame Roxanne George-Wiltshire, in the exercise of his decision to reject the third list, dated August 25, 2017”, indicating that Article 161 (2) of the Guyana Constitution “permits the President to act, independently, to appoint a person of the judicial category to be the Chairman of GECOM; that is a person who is presumptively fit and proper”.

It said that Granger had written to Jagdeo, even providing him at his request, with a list of criteria or characteristics that would make the listed persons acceptable, before resorting to appointing Justice Patterson.

“I informed him that I found the third list of nominees, submitted by the Leader of the Opposition to me, dated August 25, 2017, was “unacceptable” within the meaning of the Constitution.

“I have also paid careful attention to the ruling of the Chief Justice in the case of Marcel Gaskin vs AG et al. Desirous of fulfilling the requirements of the Constitution and given the need to appoint a Chairman of GECOM and, in light of the failure of the Leader of the Opposition to present a list that is not unacceptable, I have decided that it would be in the public’s interest to resort to the proviso of article 161 (2),” Granger wrote.

Madame George-Wiltshire, in her ruling, had advised that there is no legal requirement for the President to state reasons for rejecting a list, though it is her belief that in the furtherance of democracy and good governance, he should, since Article 161 (2) speaks to the need for dialogue and compromise.

The Chief Justice further advised that it is the Head of State who has sole discretion on the determination of what is ‘fit and proper’, and as such, the President is not obligated to select a person from the six names on a list of which he has determined are unacceptable as fit and proper persons for appointment.

Further, the Chief Justice stated in her ruling that the President must consider each person, unless the President provided the Leader of the Opposition with guidelines of who is unacceptable.

The government statement noted that President Granger did provide the Leader of the Opposition with a list of criteria, based on his interpretation of the Constitution, for a person to be qualified for the position of Chairman of the Guyana Elections Commission in a letter sent on March 16, 2017.

It said that Jagdeo did not object to those criteria and submitted a second list.