New in Pride
Home / National News / Too Much Whiteness At The Quebec Human Rights Commission? 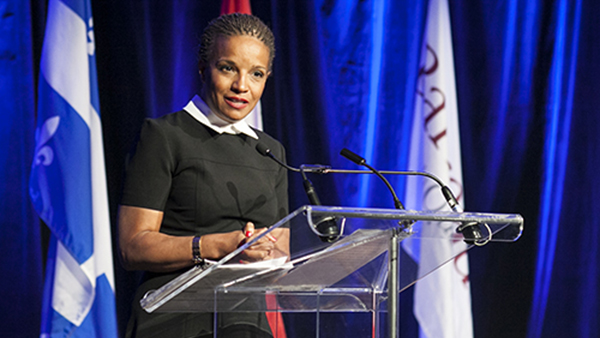 Quebec Human Rights Commission’s first Black President, Tamara Thermitus, is currently on sick leave, since last fall -- accused, by some provincial politicians, of being too "multiculturalist".

Too Much Whiteness At The Quebec Human Rights Commission?

MONTREAL, Quebec February 8, 2018 — Why is there an existing disparity between what those in power claim they want to enact and what is actually acted out? In Quebec it is simply a case of the more things change the more they remain the same — “plus ça change, plus c’est la même chose”.

Once again the Quebec Human Rights and Youth Rights Commission have come under harsh scrutiny, following the hiring of a senior manager in its Investigation Division. Now front and center of conversations are the concerns about the displayed inability of the Commission to practice what it preaches, especially as it refers to equity-employment.

The Québec public has not fully recovered (if they ever will) from the political brouhaha that surrounded the appointment of the Commission’s first Black President, Tamara Thermitus, currently on sick leave since last fall.

Before becoming head of the Quebec Human Rights Commission, she found herself the center of growing controversy, as both parties in the National Assembly objected to her appointment, claiming that she was too “multiculturalist” and much too close for comfort to Dominique Anglade, Liberal Economy, Science and Innovation Minister, who also shared her roots.

In 1976, the Quebec Human Rights and Youth Rights Commission was constituted under the Charter of Human Rights and Freedoms to promote and uphold Québec’s laws, by-laws, standards and institutional practices — both public and private — and comply with the Charter, which prohibits discrimination, based on race, colour, ethnic or national origin and religion, in the exercise of human rights and freedoms.

The organizational chart of the Human Rights Commission shows that starting from the very top and with virtually no stop, diversity is totally disregarded.

Completing the landscape is an unprecedented absence of Indigenous and racialized Anglophones, which further serves to impair the decision-making process. One is left with a troubling sense that the principal agency, tasked with ensuring diversity, is the one doing the least effective work on it.

Viewed from a different angle, the problem may be that, in Quebec, the true meaning of diversity has not been fully understood where it matters most.

To juxtapose the current situation and place it in its correct perspective, the Quebec judicial system also displays a glaring lack of diversity. Within its legal system, of the 500 or more judges operating at different levels, only three are from visible minorities.

In order to cultivate an arena of legitimacy in the eyes of the citizenry, Premier Philippe Couillard was called upon to give thoughtful and deliberate consideration to racial and linguistic diversity when filling existing vacancies, such as at the Human Rights Commission.

Even before the Human Rights Commission made this recent call, the writing was slowly appearing on the wall. Currently embroiled in putting their house in order, following the debacle involving Tamara Thermitus, it is clear that they do mind evoking any similitude of its kind.

While the blatant whiteness, and seeming rightness, reflected in the diversity-deficit within the senior ranks of the Human Rights and Youth Rights Commission, may jeopardize the Commission’s integrity and reliability in its promotion of employment fairness for minorities, it also reveals the reason behind the Commission’s continued failure to properly handle complaints of systemic racism.

Considering the fact that at the level of the Commission where decisions are made daily, the majority of which have a profound and long-lasting impact on the lives of visible minority individuals, it is therefore important that diversity is reflected in the makeup of those who occupy the role of judge and listener.

Plainly put, powerful institutions must, or should, reflect the society they serve.

It is apparent — given the present state of affairs that the Quebec Human Rights Commission remains procedurally corrupt, especially on the issue of diversity and hiring policies, despite their repeated statements to the contrary — this latest appointment at the senior management level is yet another example of business as usual.

In a recent press release, regarding the Quebec Human Rights Commission‘s pervasive whiteness and French, Fo Noemi, the Head of the Centre for Research Action on Race Relations (CRARR) stated, “One has to practice what one preaches, starting inside and starting at the top.”

This plea has sadly fallen on deaf ears, as the task of creating and maintaining diversity has fallen to those who are themselves considered “non-diverse”. A leopard cannot change its spots and it is difficult to teach an old dog new tricks.

It is time for the Quebec Human Rights Commission to look in the mirror, and cease the denial before they find themselves on trial. All that is being asked is for the agency to carry out its mandated task by practicing what it preaches.