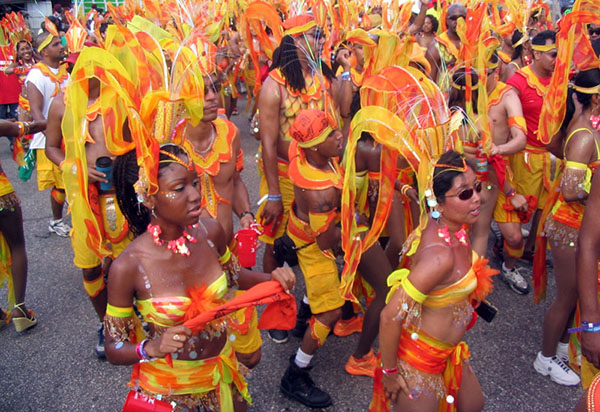 Carnival’s Struggle To Find Right Mixture Of Tradition And Modernity

“A shakeup of the entire (carnival organizing committee) needs to take place and the entire board removed and replaced with representatives of the arts and cultural communities and carnival, pan and calypso stakeholders….Properly constituted, this new board should be placed on a forward-looking management footing and mandated to identify where we are in all sectors of the carnival culture and, more importantly, where we go from here.’’

Just about anyone who is – or has been – involved in masquerade as a participant or an organizer could identify with the quote in my opening paragraph. And it doesn’t matter whether it’s mas’ in the Mecca, Trinidad and Tobago; or in some other Eastern Caribbean country, or in New York, Miami or Toronto.

The author of the quote cited above is Trinidad social and political activist, Phillip Edward Alexander. It’s an excerpt from a letter written in the aftermath of this year’s carnival in T&T.

Alexander critiqued – and by his own admission – harshly criticized Trinidad’s Minister of Arts and Multiculturalism, Dr. Lincoln Douglas, and members of the country’s National Carnival Commission.

In his letter, released just days after Trinidad & Tobago’s carnival ended on March 4, Alexander issued the dire warning that, “if firm and decisive action is not taken to rescue’’ carnival, this year could spell “the beginning of the end’’ of masquerade in the country.

“No one in living memory can remember a time when so much went wrong with so many things in the festival,’’ he says.

Alexander’s assertion and warning had me thinking of where before I’ve heard the severe cautioning that carnival is either “dead’’, “dying’’ or “gone through’’.

And, Alexander said something else that had a familiar ring. He stated: “The commercial value of our carnival needs to stop being such a well-kept secret and accounts published to show where all outflows and income goes. Worldwide carnival knock offs have become huge money spinners so why is it not for us as well? The power of the tourism sector to shape economies is hinted at but never properly exploited here.’’

Those of us in the Caribbean community in Toronto would have heard the criticism, warning, claims and angst articulated in Alexander’s letter also expressed by elements inside and outside our community as it relates to our own annual summer festival.

Ostensibly, it was those criticism, warning, claims, angst, and – according to others more versed on the matter than I am – race and politics too, which led to a virtual City of Toronto takeover of what used to be the Caribbean Cultural Committee-organized Caribana.

The festival now operates under the commercial title of Scotiabank Toronto Caribbean Carnival.

Even then, the festival still experiences operations’ and execution problems, not all its own makings nor could they have been predicted or foreseen altogether.

And I will argue, the Toronto summer festival will continue to face challenges, whether it’s City-run or CCC-run. Challenges are intrinsic to carnival. Once the word, carnival, is mentioned, certain things automatically follow.

Money, for instance, is always an issue: whether it’s griping about the size of prize money for artistes; accounting for money made and spent by organizers (universal, as in Trinidad, Toronto, New York, Grenada, St. Vincent, etc); or, complaints that governments and the private sector – the main beneficiaries – are not investing enough in carnival (also universal).

It dawned on me, after perusing Alexander’s letter and reflecting on the yearly post-carnival complaints everywhere, that the real problem of carnival might be trying to make it something it was not meant to be – a capitalist venture.

The modern Eastern Caribbean carnival, after which the Toronto event is modeled, began as a populist cultural celebration among poor, enslaved black folk; their only wealth was embodied in their spirit and their soul and their creativity and inherent talent for song and dance.

It was at carnival, at that one time of the year, when they were their own boss and could make fun of “Massa’’, parody him, cuss him in song, and temporarily forget the brutality and deprivation of daily life.

Carnival was free-flowing cultural expression. More and more, tension has arisen with each passing year, over how to package the festival, making it both an entertaining and a money-making venture.

One of the challenges with this noble approach, in my view, is the level of unpredictability and chaos (hopefully, always organized chaos) inherent in carnival.

Carnival is several events running for weeks that culminate with street jump up, with masqueraders accompanied by DJs, singers and steelbands. With competitions, judges’ subjectivity in adjudicating, and with so many people – directly and indirectly – involved in carnival over such a lengthy period, something is bound to go wrong.

Carnival is not a show at Princess of Wales Theatre that is usually just a few hours on one night. Neither is carnival the same as putting on a jazz festival or one of the other “cultural-tourism’’ festivals that have been springing up across the Caribbean.

There is wide chasm in scale and magnitude of carnival compared to these other festivals, and the original intent of carnival is quite different.

It’s not to say that carnival here and elsewhere, including Trinidad, cannot learn useful lessons – such as better budgeting and money management, professional event production, public relations and time management – from a Princess of Wales or Broadway show.

But, at some point, carnival organizers will surely have to decide on how best to balance mas’ tradition with modernity; and what, if anything, should be sacrificed to make carnival profitable, with the proceeds filtering to a wide cross-section of society.

In Grenada, there are some who hate the Jab Jab and its blackness. They argue for an end to Jab Jab or, at least, some kind of new Jab Jab rules, that would reduce what they claim to be the “fear’’ that tourists (meaning white tourist, I suspect) have for Jab Jab-playing men and women.

Having no black Jab Jab around, they argue, will bring more tourists to Grenada for carnival in August. But, will Spicemas without Jab Jab be Grenada carnival?

There is symbiotic relationship between mas’ player and spectator; but all sides are still agonizing over working out that interaction, after so many years of carnival.

In the old days of sailor mas’, flour bag and the use of inexperience material for making costumes, spectators and masqueraders were often in brief, close contact along the carnival route.

Now, with expensive and generally skimpier costumes, mas’ men and women are demanding more room to play and more distance between themselves and the non-playing crowd.

In response, organizers of mas’ have been opting for more barriers, higher and stronger sometimes, to separate players and non-players.

In each instance, the barriers have been only partially successful in keeping out spectators and side walkers. Perhaps, it’s a sign that masqueraders and spectators need each other to make carnival authentic. To have one without the other is a negation of carnival.

Phillip Edward Alexander posed a simple but provocative question to Trinidad; but I believe the question is applicable to Toronto as well.

“Where we go from here?’’ Alexander asks.

There’s no denying; carnival – in Trinidad, Toronto and in other places – is still facing teething problems.

It’s not impossible, though, that one day carnival everywhere will find the right mixture of tradition and modernity; a mixture that will maintain the fun and spontaneous free-flow of the festival, while also satisfying carnival’s business needs and its modern capitalist imperatives.