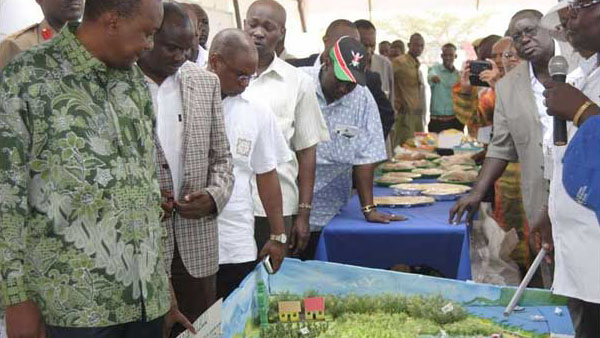 President Kenyatta, left, is shown an artistic view of the layout of the multibillion food security project in Galana and Kulalu ranch. Photo credit: Alphonce Gari.

Hunger And Food Insecurity Plague The Lives Of Millions In Africa

Africa is rising. But at the same time, Africa is the continent with the largest number of people, (390 million) living in extreme poverty.

The UN’s Food and Agriculture organization states, in a new report, that 124 million people in 51 countries experienced high levels of food insecurity.

At the core of Kenya’s new and ambitious Big Four Agenda — Food Security, Universal Health Coverage, Affordable Housing and increase to 15% the contribution of Manufacturing to GDP — is a reduction in the number of people living in poverty.

Data from a recent World Bank survey indicates that about 36 percent of Kenyans live below the poverty line.

The Big Four Agenda correctly identifies food security as a major pathway for improving the conditions of a majority of Kenyans.

As is the case across virtually the entire continent, Kenya is one of the countries, where economic prosperity has been accompanied by a rise in the absolute number of poor people. This emerging trend means that the majority of the one million youth, who enter the job market every year, end up in jobs that cannot lift them out of poverty.

As the country rolls out the Big Four Agenda, we must reflect on those sectors that offer the best pathways for quick wins, and determine how the anticipated prosperity can be shared equitably.

Global surveys have, unequivocally, shown that the agriculture sector provides the best opportunities to create employment and lift people out of poverty.

In Kenya the agriculture sector accounted for the largest share of poverty reduction.

With a growing population and continued land degradation, due to overgrazing, poor farming practices, deforestation and climate change, Africa must look to new ways to make farming more productive and profitable.

Akinwunmi Adesina, the President of the African Development Bank (AfDB) says agriculture will be a one trillion dollar business in Africa by 2030.

Even as Kenya seeks to implement poverty reduction strategies, it should fix a keen eye on the rapid population growth.

The Asian Tigers were able to bring down their total fertility rates, and this allowed them to reap a demographic dividend. Gross domestic product increased sevenfold, an economic boom, described as the “Asian economic miracle”, followed.

Every girl and woman must be supported and allowed to achieve her full human potential, be educated and empowered and able to join the work force, as well as to plan her family. They are the engines of economic growth.

The place to start is with the youth, with the twin goal of getting young people into agriculture-related jobs, as well as providing them with reproductive health services and information.

Lack of information and services – and the often-perilous consequences – leads to mistakes that impact the education and employment opportunities for many.

Kenya must create one million new jobs every year, for the next 10 years, to cater for the rapidly expanding youth bulge.

With agriculture as the country’s economic base, this is the one sector that can absorb most of the unemployed young people in Kenya, both as semi-skilled and highly skilled labour.

The country’s leadership has clearly put in place the right growth momentum, with reduction of poverty as the centre of focus. We must all come together to make that growth inclusive — and to leave no one behind.

Moody Awori, is the former Vice President of the Republic of Kenya. Siddharth Chatterjee is the United Nations Resident Coordinator to Kenya.