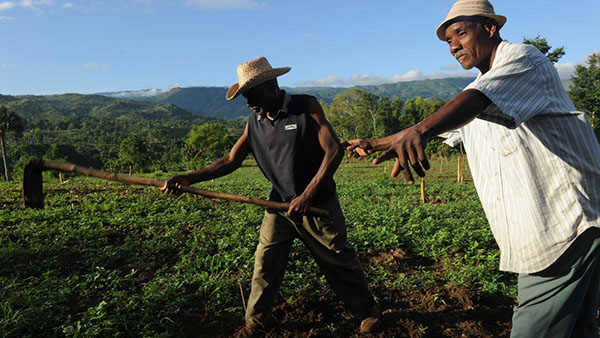 UNITED NATIONS, New York August 3, 2018 (CMC) – The International Fund for Agricultural Development (IFAD) says it is investing US$10.8 million, to help restore agricultural productivity in some of the worst-affected areas of Haiti.

With many rural areas in the French-speaking Caribbean country still recovering from the devastation, caused by Hurricane Matthew in 2016, the IFAD says the funds will be distributed through the Agricultural and Agroforestry Technological Innovation Program, known by its French acronym PITAG, extending its reach to eight additional municipalities in Haiti’s South Department, and spreading sustainable agricultural practices and technologies.

The UN said weak agricultural practices in Haiti have been compounded by a series of natural disasters.

The most recent Hurricane Matthew, which struck the south-western part of the country on October 4, 2016, left 2.1 million people severely affected, according to the UN Office for the Coordination of Humanitarian Affairs (OCHA).

As of February 2018, some 622,100 are reportedly still in need of food security assistance, OCHA said.

While the situation in Haiti has improved since the hurricane hit, the UN said “deep-seated vulnerabilities persist”.

Over the past few decades, Haiti has seen its soils, water reservoirs and woods severely degraded, the UN said.

It pointed to World Bank data that shows that 59 percent of the total population lives below the poverty line, with the figure rising to 75 percent in rural areas.

Today, Haiti produces only 45 percent of the food that Haitians need, the UN said.

For example, he said the program proposes the combinations of fruit trees and vegetable cultivations, as a means to achieve larger harvests and feed more people, “all in an environmentally-sustainable manner”.

IFAD said the new technologies and practices, endorsed by PITAG, will be put in place through farmer field schools, a method of learning, which involves community-based and peer-to-peer teaching programs.

After the training, IFAD said small farmers will get tools, seeds and other inputs to practice the innovations they will have learned.

Currently, PITAG – a US$76.8 million program – is already under way in many areas of Haiti, thanks to financial support from the Inter-American Development Bank (IDB) and the Global Agriculture and Food Security Program (GAFSP), IFAD said.

With 65,000 small farming households targeted, it said the project focuses particularly on women, youth and other vulnerable groups.