Guyana's President, David Granger (fourth from right) and the government contingent seen in discussions with Opposition Leader, Bharrat Jagdeo (fourth from left) and his officials.

GEORGETOWN, Guyana, January 10, 2019 (CMC) – The Government of Guyana and the Parliamentary Opposition have committed to work towards concluding matters, surrounding the December 21, no confidence vote in the National Assembly, which is currently engaging the attention of the court.

This was disclosed in a joint communiqué, issued by both parties, following the meeting, yesterday.

According to the communiqué, the two sides met, in an atmosphere of cordiality, and committed to working together, on all matters relating to the protection of Guyana’s sovereignty, regardless of the internal political issues.

Discussions focused on two broad areas, as set out in an agenda put forward by President David Granger. These included the constitutional and legal situation, which involves the functioning of the National Assembly and Regional and General Elections.

The President indicated that the Government and the Opposition, by agreement in the National Assembly, can enlarge the time for the hosting of the elections, beyond the 90 days contemplated by Article 106 (7) of the Constitution.

Opposition Leader, Bharrat Jagdeo, called for the National Assembly to only meet to deal with issues, connected with the provision of essential services by the State and all matters related to the preparation of General and Regional elections. 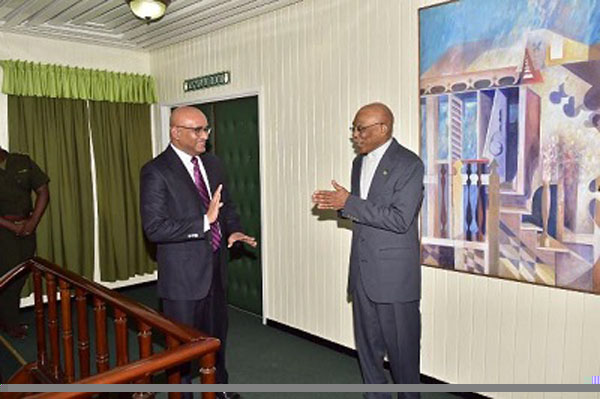 Guyana Opposition Leader, Bharrat Jagdeo (left) and President, David Granger, chat with each other, before the important meeting, yesterday.

However, Granger stated that it is lawful for the Government to engage the Court, to bring clarity to the provisions of Article 106 (6) and 106 (7) of the Constitution. Pending the conclusion of the legal proceedings, Parliament, he said, remains functional.

The Head of State emphasised that the Government is legal, and that it must govern without any limitations on its authority. He further stated that there is no provision in the Constitution, which imposes a limitation on the Government to perform its lawful functions.

The parties then identified Minister of Social Protection, Amna Ally, and Opposition Chief Whip, Gail Teixeira, to enquire into the readiness of GECOM.

Both parties expressed their willingness to meet, to ensure the management of the various issues facing the nation.

Granger, in an address immediately following Wednesday’s meeting, said the two sides will examine the hosting of the elections, within the administrative capabilities of GECOM, and deemed the meeting “fruitful”.

“I would say, in conclusion, that we have had a successful engagement, both the leader of the Opposition and the President are concerned about the situation. We would like to assure the public of Guyana that we are working to a solution, which they will be satisfied with, the public interest is our paramount concern.,” the President stated.