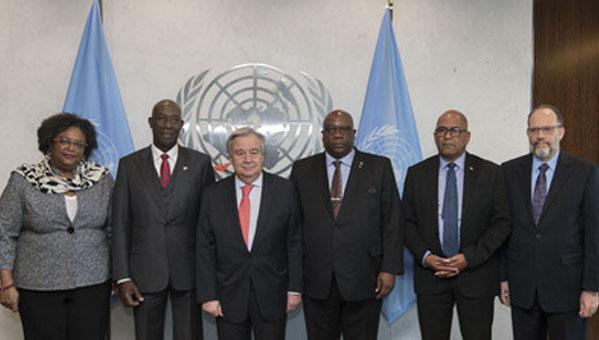 CARICOM Meets With UN Leadership: Holds Out Hope For Peaceful Solution In Venezuela

A communiqué, issued following the talks at the United Nations, noted that the Caribbean leaders had expressed their “grave concern over the untenable situation” in the South American country and “strongly urged that further deterioration would seriously aggravate the plight of Venezuelans”.

“The Caribbean Community is steadfast that the region must remain a Zone of Peace,” the communiqué stated.

The United States is leading a number of western and Latin American countries in recognising the Venezuelan Opposition Leader, Juan Guaidó, who, last Wednesday, declared himself the interim leader of the South American country.

But Russia, China and Cuba are among countries that are supporting President Nicolas Maduro, who was sworn into office, earlier this month, for a second consecutive term as head of state. 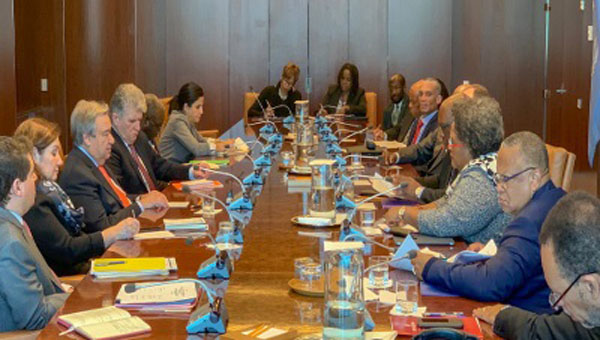 Washington and its allies have accused Maduro of suppressing democratic rights in the country and have called for his removal. Caracas has broken off diplomatic relations with Washington, and Maduro has accused the powerful North American country of engineering a coup to remove him from office.

The CARICOM delegation, which was led by its chairman and St. Kitts-Nevis Prime Minister, Dr. Timothy Harris, and including his Trinidad and Tobago counterpart, Dr. Keith Rowley, and Barbados Prime Minister, Mia Mottley, had, during their deliberations with Guterres, “emphasised its commitment to the tenets of Article 2(4) of the UN Charter, which calls on states to refrain from the threat or the use of force”. CARICOM has been consistent in the critical importance it accords to the key principles of non-interference and non-intervention.

“CARICOM reaffirmed the view that there was an urgent need for meaningful dialogue, leading to a peaceful internal solution for the Venezuelan people. The Caribbean Community is resolute in its belief that it is never too late for dialogue, since the consequences of no dialogue will be dire,” said the delegation that also included Grenada’s Foreign Affairs Minister, Peter David, and the CARICOM Secretary General, Irwin LaRocque.

The communiqué noted that the United Nations Secretary General extended his offer of good offices, circumstances permitting, “to facilitate dialogue and negotiation between the parties”, and that CARICOM “indicated its readiness to work, assiduously, to bring the parties to the negotiating table”.

The communiqué noted that as a result, the CARICOM leaders, yesterday, engaged with various officials from Canada, the Russian Federation, the European Union and the African Union, as well as with President Maduro and the Foreign Minister of Mexico, “with a view to reduce tensions and build a platform for dialogue”.

“Further engagements will take place in the next few days as the situation remains fluid,” the communiqué noted.

Earlier, in a statement, the Office of the Prime Minister of Trinidad and Tobago, had stated that the regional leaders had expressed optimism that the UN would assist in establishing the roadmap towards peace and security for Venezuela.

According to a statement, Prime Minister Rowley expressed hope that in the not-too-distant future there will be significant improvement and a diminishing of tensions in Venezuela.

“We believe, in the coming days, there will be work towards dialogue so that the internal difficulties in Venezuela can be approached, without intervention and interference from those who may have a different approach,” Rowley said in the statement.

The statement noted that “coming out of the meeting, the CARICOM delegation is satisfied that if the conditions for such can be met, the UN will assist in establishing the roadmap towards peace and security for Venezuela and the region”.

The meeting with the UN Secretary General followed an emergency meeting of CARICOM leaders, last Thursday, where it was decided that the regional body should engage the global organisation.

Following the discussions, the CARICOM delegation held a meeting with the Canadian Ambassador to the United Nations, Marc-Andre Blanchard, and are also expected to meet with officials from Russia, China and Venezuela.

The 15-member CARICOM grouping has remained divided on the issue and, earlier this month, Jamaica, Haiti, the Bahamas, Guyana and St. Lucia supported a resolution at the Organisation of American States (OAS) in not recognising the second five-year term of Maduro, while Dominica, St. Vincent and the Grenadines and Suriname voted against the measure.

St. Kitts-Nevis, Trinidad and Tobago, Antigua and Barbuda, Barbados, and Belize abstained during the vote, while Grenada was not present.

In the statement that followed Thursday’s conference, the regional leaders, nonetheless, “reaffirmed their guiding principles of non-interference and non-intervention in the affairs of states, respect for sovereignty, adherence to the rule of law, and respect for human rights and democracy”.

“Heads of Government reiterated that the long-standing political crisis, which has been exacerbated by recent events, can only be resolved, peacefully, through meaningful dialogue and diplomacy,” the statement said, noting that they have “offered their good offices to facilitate dialogue among all parties to resolve the deepening crisis”.

Last weekend, a senior UN official told the UN Security Council that all actors must exercise maximum restraint and avoid any further escalation.

“The protracted conflict in [Venezuela] has had a grave impact on the population, with high levels of political polarization, growing humanitarian needs and serious human rights concerns,” said Rosemary DiCarlo, Under-Secretary-General for Political and Peace-building Affairs.

She urged all parties to respect human rights and the rule of law, warning that the situation could spiral out of control.

Diplomats from St. Vincent and the Grenadines, Suriname, Dominica and Antigua and Barbuda also addressed the UN Security Council meeting.