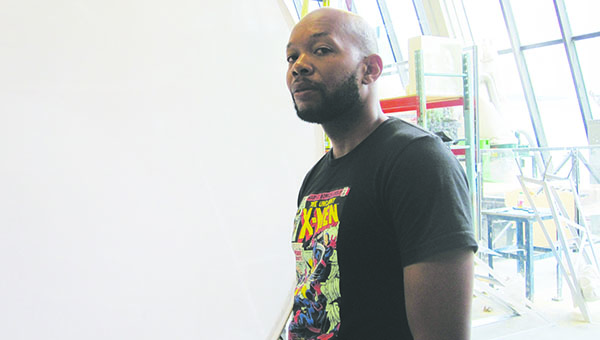 Photo above is of Marlon Griffith at the Sculpture Studio at York University. Photo credit: Neil Armstrong.

TORONTO, Ontario — Just as the TO2015 Parapan American Games are kicking off, Toronto will witness Ring of Fire, a 300-person procession created by internationally renowned Trinidadian artist, Marlon Griffith.

Commissioned by the Art Gallery of York University (AGYU), and two-years in the making, Ring of Fire is created for the people of Toronto.

Curator and assistant director of the AGYU, Emelie Chhangur, says she is always interested in long-term projects that bring different types of individuals together in brokering new social relations.

“I’m really interested in cultures mixing,” said Chhangur, noting that she tends to do these long-term projects every few years because they require a lot of resources.

This is the largest project, to date, and came about because she was traveling in Japan in 2013 and saw one of Griffith’s processions.

“I pretty much invited him. I proposed to him to do a procession for Toronto,” says Chhangur who is interested in working with international artists whose practices lend themselves to fostering new relations in the City of Toronto.

“A lot of my curatorial work is dedicated to the City of Toronto, even if I am working with an international artist.”

She said Griffith’s strategy is to use the “mas camp” as a way of bringing communities into his studio to build these street processions.

He expressed an interest in making a pan-Toronto project which required “capitalizing on what’s already going on in the city and how to bring different communities together in a respectful, trustful, ethical way and to push Marlon’s practice,” says Chhangur.

This meant having “mas camps” at community arts organizations and moving people around the city in different ways.

Ring of Fire will take place on Sunday, August 9 along University Avenue from Queen’s Park to City Hall.

This groundbreaking large-scale, long-term participatory art project is the culmination of a transcultural and interdisciplinary collaboration between individuals, groups, and organizations from across the Greater Toronto Area and beyond.

Ring of Fire is inspired by the Anishinaabe Seven Grandfather Teachings: Wisdom, Courage, Respect, Honesty, Truth, Humility, and Love, which serve as the basis for the organizational structure of the procession (the “bands”) as well as guides the working principles of its making.

It brings together disability dancers from Picasso Pro and Equal Grounds, the Mississaugas of the New Credit First Nation, members of Toronto’s Capoeira Angôla community, and young spoken word poets from Jane-Finch, Malvern and Regent Park.

Although a stand-alone project, Griffith wanted it to be related to the Parapan Am Games and so they had to re-think the nature of a street procession, including persons with disabilities.

“And so that added a whole other level to the way in which we are working. So we really had to be out there meeting individuals to give us advice on costumes,” Chhangur said, noting that she also went to wheelchair dances and contacted integrated dance companies that started to inform different kinds of mobility devices.

Griffith says the Parapan Am Games doesn’t get the kind of attention that the Pan Am Games gets and coming from a background in carnival, “you don’t normally see persons with disabilities in that kind of space so you won’t see somebody in a wheelchair playing mas’. If you do see them it’s rare and if you see them they are sitting on the sidelines looking on. So, it was about re-thinking movement as well in public space.”

Chhangur says Ring of Fire is not just a street procession but it is also a pedagogical and activist project, “and everything we’ve done in relation to the project has been about forging solid relationships between different individuals and groups.”

Griffith has participated in residencies and exhibited extensively across the globe.

Griffith, 38, lives in Nagoya, Japan where his first project there, Song of the Sun, was at Aichi Triennale in 2013.

It was a procession of 100 people through the city of Nagoya, a celebration of the people whose lives were lost during the tsunami in 2011.

The main feature of that procession was of the idea of the phoenix, which is symbolic within Japanese and Asian culture of renewal and rebirth. It was a big red flame that moved through the streets.

The procession in Toronto will be exactly two years from when Chhangur first visited Griffith’s studio in Japan during Aichi Triennale project.

Ring of Fire will be his biggest project so far but he’s not concentrating on the number of people but who are the people involved and the context in which the project is happening.

“I think what people should understand is that this project or the projects I’m doing is not carnival. It uses that process, it uses those aesthetics but it’s a contemporary art project.”

Griffith started off working in children’s carnival with a group, eventually doing it on his own.

He always wanted to be an artist and even while he was making mas’, starting at the age of 18, he didn’t really consider himself an artist.

Because the carnival season is usually very short, the challenge for him was how could this thing operate outside the context of the carnival space.

“Can it have a voice? How does this process respond outside of its normal environment without the infrastructure that’s usually put in place for it? But it was also a question about this whole thing, about it being art as well. Most people wouldn’t consider something like that art. It’s a festival driven form that happens,” he says, noting that from the western standpoint it is not painting or sculpture that goes onto the walls.

He questioned who dictates what is art, especially given the mas’ art form that includes painting, sculpture and performance, the involvement of many people, and the ephemeral nature of the work.

“The project itself has taken me out of a comfort zone as well which is a good thing. Normally, I would be in a very fixed space and there might be a group of people I’m working with towards a finished project.”

He has been coming to Toronto for the past two years and has been meeting with different groups of people regarding the project. Since May he has been here working steadily on the procession.

“I think what has developed out of the project is like a language that had to be learnt in order to make all these pieces fit together. And, up to this point I still feel like things are still kind of coming together because there are so many elements and because of the people involved as well. Coming from a practice where you work most of the time with just able-bodied people, because this is the other side of the project, there are things you don’t think about,” he said, noting that Picasso Pro is an integrated dance group and Equal Grounds is made up of wheelchair users.

He has to re-think his process of working and the kind of inclusive language to use in the project.

The same applies to working with the Mississaugas of the New Credit First Nation which has changed his thinking around the idea of First Nations and, “in Trinidad we have Indian mas’ where people make costumes that look like Native American or Canadian regalia but when they have on their traditional wear it is not a costume.”

From May to July, “mas camps” for costume production, spoken word, movement, and music have been taking place at some of Toronto’s leading arts organizations — Art Starts, SKETCH, The Malvern S.P.O.T., COBA, and Success Beyond Limits.

These custom-made, complex structures are produced as part of the prestigious Louis Odette Sculptor-in-Residence program – a four-week intensive conducted by Griffith with advanced students in the School of the Arts, Media, Performance & Design at York University.

A costumed “Entourage” of over 70 individuals accompany the main Sentinel characters, and are played by members of Picasso Pro, Equal Grounds, the Mississaugas of the New Credit First Nation, Capoeira Angôla, and youth-artists.

Designed by Griffith, the hand-made Entourage costumes are produced by aspiring fashion designers from the Sew What?! program at Art Starts  as well as by emerging artists from the visual arts program at SKETCH.

Spoken word poets play the roles of “orators” in the procession, addressing the public as the procession weaves down University Avenue. For the past year these young poets have participated in a mentorship program across the city of Toronto at COBA (Regent Park), Success Beyond Limits (Jane-Finch) and The Malvern S.P.O.T. (Scarborough), where they have learned about the Seven Grandfather Teachings and produced new poetry inspired by them from their own point of view.

Music in the procession is conceived by Alternative Roots, a First Nations youth group from New Credit, in collaboration with the SKETCH Band, while the choreographic sequences of the Entourage is a hybrid form of movements and gestures culled from a mixture of integrated dance, Capoeira, and Pow-Wow developed through workshops by Picasso PRO’s Anna MacLean, Capoeira Master Marcio Mendes, and members of the Mississaugas of the New Credit First Nation respectively.

Members of the public are invited to participate in the final procession.

An exhibition of Ring of Fire takes place at the Art Gallery of York University (AGYU) from September 23 – December 6, 2015 and a book, supported by the Partners in Art, will be published in 2016.