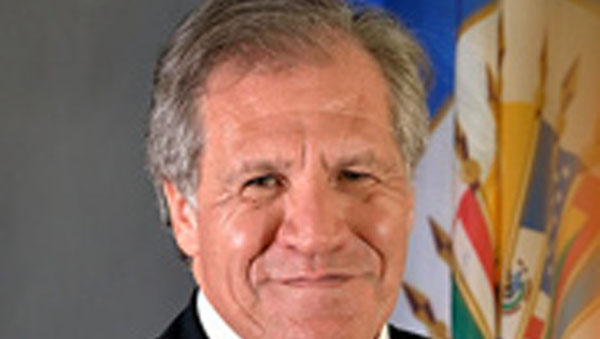 Secretary General of the Organisation of American States (OAS), Luis Almagro, is also the Chair of the Joint Summit Working Group (JSWG).

GEORGETOWN, Guyana, February 20, 2019 (CMC) – The 15-member Caribbean Community (CARICOM) grouping said it remains “deeply concerned” by the actions and statements of the Secretary-General of the Organisation of American States (OAS), Luis Almagro, which it said “are outside the bounds of his remit, as the head of an international organisation”.

CARICOM Chairman and the Prime Minister of St. Kitts-Nevis, Dr. Timothy Harris, said that Almargo’s latest “manifestation of his inappropriate behaviour”, followed his statement, made regarding free and fair elections in Dominica.

In a message, posted on his Twitter account on February 7, Almagro said he had met with the island’s former ambassador to the OAS, Crispin Gregoire, who “expressed his concern that the upcoming elections in Dominica are not free and fair”.

The Dominica government has since written to Almargo, demanding an apology.

In the statement, the CARICOM Chairman said Almargo’s “Tweet of 7 February 2019, associating himself with a suggestion that Dominica will not conduct free and fair upcoming elections, is the latest manifestation of his inappropriate behaviour”.

“Further, it is disturbing that without first consulting with the government of Dominica, which is a Member State of the Organisation, he, as Secretary-General, should be associating himself with such an inference.

“The Community, once again, calls on the Secretary-General to refrain from actions and statements, which are beyond the competence of the Office and affect the impartiality of the Organisation, which he has the privilege to lead,” Harris said in the statement.

In the two-page letter to Almagro, Dominica’s Foreign and CARICOM Affairs Minister, Francine Baron, demanded that the OAS Secretary General immediately remove the message on his Twitter account, as well as apologise.

“You are the head of the Organisation of American States, an organisation that the Government of Dominica has invited, for the last two elections, to monitor our elections in Dominica. As with any system in the world, our electoral system is not perfect, but observers have consistently held that our elections are free and fair,” she wrote, informing him that general elections are constitutionally due in 2020.

She said that recommendations have been made, regarding ways to improve the electoral system, “chief of which is through the introduction of voter identification cards and the revision of the voters list”.

Baron said that the Electoral Commission has approved a system for the introduction of the cards, and the legislation to facilitate the process has been drafted.

“It is clear that in posting this tweet, you, Mr. Secretary General, are endorsing and giving credence to unsubstantiated complaints made to you, without giving the Member State, whom you represent, even the simple courtesy of an opportunity to respond. Is that what we, as Member States, can expect from you, as your new modus operandi.

“We demand that you immediately take down that tweet, which is inaccurate, false and misleading and tender an appropriate apology and clarification that this does not represent a conclusion by the Organisation of American States,” Baron wrote.

CARICOM has also take issue with Almargo on his personal stance, taken on the ongoing political situation in Venezuela, where he has supported the overthrow of President, Nicolas Maduro.

Meanwhile, former Trinidad and Tobago diplomat, Reginald Dumas, is urging CARICOM to consider nominating a candidate to oppose Almagro, who has indicated a willingness to seek a second consecutive term as OAS Secretary General.

Writing in a newspaper article, earlier this month, Dumas, a former ambassador to the OAS, wrote that “another five years in the post will only make things worse, and further weaken the organisation”.

He said that Uruguay has already declared it will not back him.

Dumas, who in 2004, was appointed by then-UN Secretary General, Kofi Annan, as his special advisor to Haiti, said that of the 34 active OAS members, 14 are from CARICOM.

“A simple majority (18) is needed for election of an SG, so at least four more countries must support us. Here’s a good test of our newly-found unity and co-ordination in foreign affairs. Can we do it? Sí, podemos. Yes, we can.

“But, and it’s a big but, a suitable candidate must first be found. Whatever the other characteristics and qualities, it has to be someone who has held a major post, almost certainly political, in his or her country,” Dumas wrote, suggesting that former St. Lucia prime minister, Dr. Kenny Anthony, a .constitutional lawyer with wide regional and international experience, would be his candidate of choice.