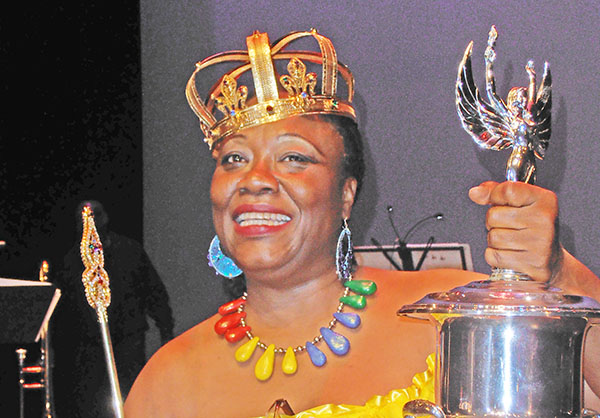 Eulith Tara Woods—Calypsonian Macomere Fifi—is a genuine master of the art. She has won more Calypso Monarch titles in Toronto than any other artiste.

Last Saturday, the Organization of Calypso Performing Artistes (OCPA) hosted its 2014 Calypso Monarch competition in Scarborough. And, on a night when there were good calypsoes from all nine competitors at OCPA’s “Kaiso 365’’ event, Fifi was simply the best.

Macomere Fifi, performing in position six, was the first calypsonian, for example, to reference in song the topical, drug-using and controversial Toronto Mayor, Rob Ford.

In God Bless Toronto, she urged city residents not to allow “one man to bring us down.’’

By the end of the competition’s first round, gauging by the reaction of the near capacity-fill hall at the Chinese Cultural Centre, Fifi was clearly leading all competitors.

She piled on additional points to extend her lead in the second round with a tribute to—in her words—one of her “heroes’’; that is Sparrow, the Calypso King of the World.

A voice clip of Sparrow—real name Slinger Francisco—was used as part of the introduction to Before Yuh Gone, in which Fifi mentioned several “Birdie’’ songs or used lyrical lines from many of Sparrow’s well-known calypsoes, including Jean and Dinah, Maymay, Don’t Back Back, Tobago Girl and Phillip, My Dear.

In the run up to the competition, 79-year-old Sparrow heard Before Yuh Gone “and was very impressed with it,’’ Fifi told Pride News Magazine.

Macomere Fifi was named winner of several individual categories such as most original calypso; rendition; arrangement; and people’s choice, which was decided in balloting by the audience.

“This one is extra, extra, extra special, even though I enjoy and relish every win up to this point,’’ Fifi said in a post-competition interview. “The fact remains that, in Toronto, we have people who have won it one time, two times, three times, four times and a few of us five times. This is the first time someone has ever won it six times.’’

Moreover, said Macomere Fifi, “It’s a double win for me because it’s a woman who did it; women are trailblazers in this calypso thing. Once upon a time, it was a man’s thing; it’s ‘all-ah-we’ thing now. It’s a double pleasure for me.’’

Former monarch, Michael “Beginner’’ Moore, was second on Saturday. He also was named as the artiste having both the best melody and best stage presentation.

The flow of the competition and the performance of the artistes were enhanced by Itah Sadu’s professional emceeing, and by the musical accompaniment of Ossie Gurley & The Truth and the three-woman backup singing group.

A remaining challenge, however, for OCPA and other calypso associations in other countries, is to attract interest in the art-form from a younger generation.

The average age of the audience at last Saturday’s OCPA competition was 55 or older.