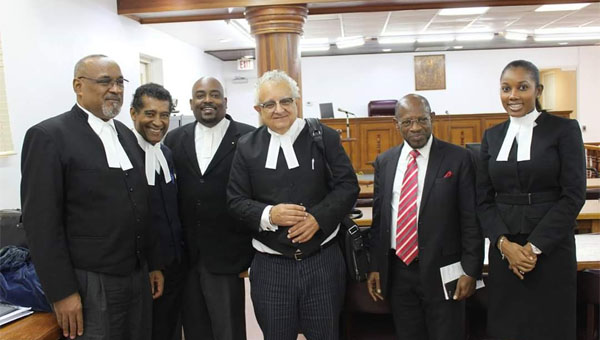 Former St. Kitts-Nevis Prime Minister and Opposition Leader, Dr. Denzil Douglas (second from right) and his lawyer, Senior Counsel, Anthony Astaphan (third from right) pose for a victory-photo, with other members of his legal team, after a judge had ruled in his favour in the "passport case", brought against him by the Dr. Timothy Harris-led coalition government.

BASSETERRE, St. Kitts-Nevis, February 21, 2019 (CMC) – Former Prime Minister and Opposition Leader, Dr. Denzil Douglas, yesterday, scored a major victory in the passport case, brought against him by the Attorney General, when the court ruled in his favour.

The government took Douglas to court, seeking a declaration to have him disqualified from being a member of the National Assembly, on the grounds that he had contravened Section 28 (1)(a) of the constitution of St. Kitts and Nevis. The administration also asked that if that declaration was made, that Dr. Douglas would have to vacate his seat in parliament, and there should be an injunction that would bar him from the national assembly and from carrying out any functions of an MP.

Senior Counsel, Anthony Astaphan, countered that Dr. Douglas never applied for, or acquired, citizenship for Dominica; nor had he sworn any oath of allegiance to that foreign power. He further explained that in every instance, where Dr. Douglas used the diplomatic passport to travel, he had put Kittitian, as his nationality, on all travel documents.

“I find that the defendant obtained the diplomatic passport, solely as a gesture of political and professional courtesy, extended to him, in his capacity as former prime minister.

“I further hold, that under Dominican law, the voluntary act of acquiring and using a diplomatic passport, by a non-citizen, does not place the holder under an acknowledgment of allegiance, or adherence or obedience to Dominica, within the meaning of Section 28 (1)(a), as this is not an act that manifests the conscious exercise of the defendant’s will, acknowledging the obligation of fidelity and obedience to the Commonwealth of Dominica,” the judge declared.

Based on the ruling, Douglas won’t be barred from taking his seat on the National Assembly.

Attorney General, Vincent Byron, said he was disappointed in the decision, but will respect it.

In response, Douglas said the ruling, handed down, was “resoundingly in my favour. His Lordship Justice Trevor Ward Q.C. has ruled, specifically, that a diplomatic passport, issued to me by the Government of Dominica, as professional courtesy, does not, in any way, offend the constitution of St. Kitts and Nevis. I feel a deep sense of vindication upon the judgment of the Court”.

The former Prime Minister said the victory, is not just for him, but for all “because of the far-reaching implications that this case has for democracy and good governance in our Federation of St. Kitts and Nevis.

“His Lordship in his ruling has acknowledged that the holding of a diplomatic passport does not call into question my loyalty or allegiance to my beloved country and the people, whom I represent.  My loyalty to my country has always been paramount, when taking decisions that would allow me to best execute my duties, in my capacity as leader of her Majesty’s Loyal Opposition and as four-term former Prime Minister of St. Kitts and Nevis.”

Douglas blamed the current administration, stating that it failed to “grant me the courtesies, befitting my rank and role, and has been purely an act of political harassment, in pursuit of Dr. Timothy Harris’ personal vendetta,” adding that the “case was intended as a distraction and as a scurrilous attempt to malign and injure my good character and reputation”.

“Now that I have emerged triumphant, I look forward to my next encounter with Dr. Harris and his coalition administration – that will be at the upcoming general elections,” said Douglas, whose St. Kitts-Nevis Labour Party government lost the last general election in 2015.