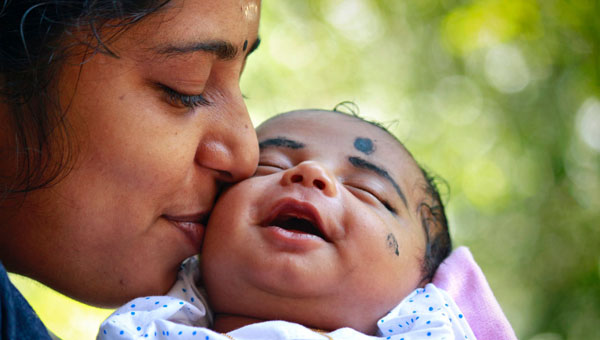 Does it matter what your newborn baby is called? Photo credit: Nandhu Kumar/Pexels.

“What’s in a name? That which we call a rose by any other name would smell as sweet.”
–Shakespeare, Romeo & Juliet

Across three recent experiments conducted with our colleagues from the University of Calgary — Joshua Bourdage and Kristen Deschamps — we found that people with softer-sounding names like “Anne” or “Owen” were expected to be more agreeable, emotional and hardworking; while people with harder-sounding names like “Kate” or “Kirk” were expected to be more outgoing.

Why might the name of a person suggest different kinds of personality? Over the past century or so, research on sound symbolism has demonstrated that people will associate certain language sounds with particular properties. For example, the two words: “maluma” and “takete” were first used in 1929 by linguist researchers. How would you pair them with the two shapes below?

If you’re like 90 per cent of the people studied worldwide, you probably paired “maluma” with the round shape, and “takete” with the jagged shape. Something about the sounds in these words (or maybe even how they feel as you say them) makes them seem to go along better with the round or the jagged shape. There have also been demonstrations of certain language sounds seeming like better fits for shapes of certain sizes, colours and even those travelling at certain speeds. 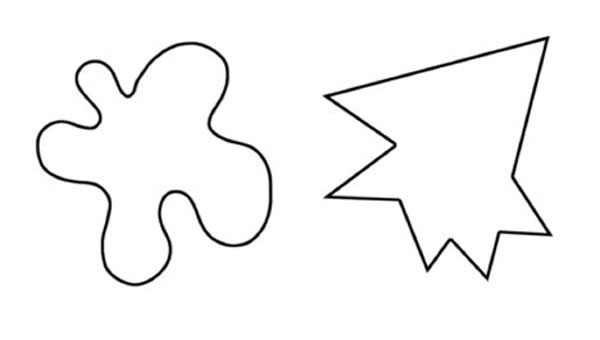 Which shape of the ones pictured, here, would you associate with the made-up words ‘maluma’ and ‘takete’? Made-up words created from models by Penny Pexman/David Sidhu. Image provided by authors.

In our research, we asked the question: what about the sounds in a person’s name? Will they also lead to certain expectations about the person? Beyond associations with visual properties like shape or size, could the sounds in names also be associated with different personalities?

People with abrupt-sounding names are seen as extroverted
We compared names containing what are called sonorant consonants (e.g. /m/ or /l/) to those containing “voiceless stop consonants” (e.g. /k/ or /t/). Sonorants are characterized by a more smooth and continuous sound, while voiceless stops are more abrupt.

Compare the consonants in “Mom, I’m online now!” to “Pop’s kite! It cracked!” These are very different kinds of sounds, and so we asked if names containing these different sounds would be associated with different personalities.

We looked at the six personality factors from the HEXACO model of personality: Honesty-Humility, Emotionality, eXtroversion, Agreeableness, Conscientiousness (how hardworking and organized a person is) and Openness (to experience). In our first two experiments, participants were asked how much they expected people with either sonorants or voiceless stops in their names to have these different personalities.

72 made-up names — and how they get judged
In a follow up experiment, we were curious how much this had to do with the names themselves versus the sounds that they contained. For example, maybe participants were just thinking of Captain Kirk when they judged that “Kirk” is highly extroverted.

So, we found uncommon or made up names that still contained sonorants or voiceless stops, but that participants wouldn’t associate with existing people. Examples of sonorant names are: Ammel, Nilo and Leonne and examples of voiceless stop names we used were: Triss, Seka and Treek.

We found the same effects once again. Also, if you are ever looking for an original name for a baby, we have 72 ready to go! And we know what kinds of personalities people will associate with them!

At this point we were curious — as you the reader probably are too — to know if these associations are reflected in the real world. Are people with sonorants in their names actually kinder than people with voiceless stops in their names?

This sounds outlandish, but there is recent work showing that individuals might change their appearance over time to look like their names. Might it also work for their personalities?

No truth to the judgment
To find out, we tested over a thousand people, collecting information about their personalities and their names. We found that the answer was a resounding “no.” None of the associations that we observed in our experiments existed in the real world. There was no evidence that “Annes” are actually kinder than “Kates,” or that “Kurts” are more outgoing than “Owens.” 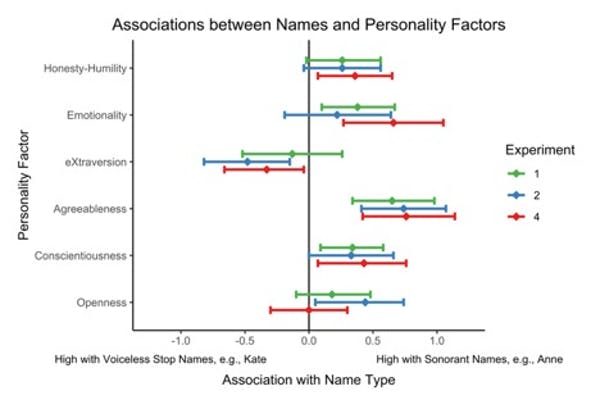 But our other experiments show that people might think they are (if all they know about someone is their name).

This again suggests that the effect comes from the sounds of the names and is not inferred from the personalities of real people. So what is it about the sound in “Anne” that makes it seem especially kind? The maluma/takete effect is often explained by a sort of metaphorical extension of the qualities of the sounds or feelings of the words to the shapes. “Maluma” feels softer than “takete” as you say it, and it also involves less abrupt changes in sound.

This matches the smooth outline of the round shape we showed you earlier when we asked you to choose which shape best matches which sound. Some researchers have suggested that something similar may be happening when sound is matched with personality. Maybe the smoothness of sonorants metaphorically matches an agreeable personality, while the quick changes in voiceless stops match the energetic nature of an extroverted personality. We’ll need more research to know for sure.

This work helps to answer the age-old question posed by Shakespeare: what’s in a name? Our results suggest that names carry information that affects what we expect someone to be like in terms of their personality.

It seems that if “Rose” were to go by another name, she may not seem as sweet.