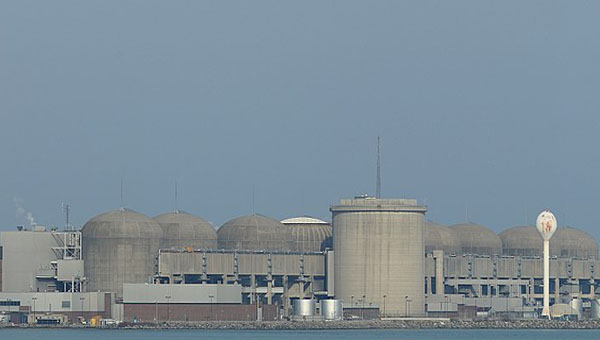 The Pickering Nuclear Generating Station -- viewed from the west in photo -- was the subject of a false alarm, last Sunday. All eight reactors are visible, from 2.5km to 3.25km away. Photo credit: Mdf - Own work, CC BY-SA 3.0.

On Sunday at 7:23 a.m., residents of the Greater Toronto Area were abruptly awakened by an alert issued by Ontario’s Emergency Alert Ready System stating: “An incident was reported at the Pickering Nuclear Generating Station. There has been NO abnormal release of radioactivity from the station and emergency staff are responding to the situation.”

At 8:06 a.m., the Ontario Power Generation released a statement that the alert was issued in error and that there was no danger to the public or the environment. At 9:11 a.m., another message from the Provincial Alert Ready System stated that the initial nuclear alert was “in error”.

Any time there is an incident — including a false alarm — at a nuclear power station, it causes us to pause and consider the impacts of the fallout. In this case, the fallout is not radioactive, it is increased public uncertainty concerning the reliability of systems meant to warn the public about nuclear disasters.

From the study of low-probability, high-impact technological disasters, like the 1917 Halifax Explosion, I suggest that when human error intermingles with technology we can find teachable moments in the failures.

The alert — what worked?
Routine training, drills and exercises are a constant feature of emergency-preparedness systems, designed to protect us from technological hazards. In this case, an error made at an otherwise well-intentioned exercise, turned into a gongshow.

From one perspective, the system worked. However, these alarm tests certainly worked to capture the public’s attention, but in a bad way.

An emergency bulletin was issued, stating a concern existed (an incident) and the location of the concern was stated (Pickering). Then the alert provided advise on precautionary and protective measures and recommended that people near the Pickering Nuclear Generating Station did not need to take any protective actions at this time.

Nuclear incidents are typically contained on the site of the nuclear power station itself. In the rare event of a radioactivity release off-site, a 10-kilometre zone surrounding the Pickering Nuclear Station would be the initial area where the public would directed to take immediate action. This area would include the City of Pickering, the town of Ajax, and the far eastern end of Toronto.

Damages caused by the false alarm
The error of publicly broadcasting the alert came during a routine Sunday morning training exercise at the Ontario’s Provincial Emergency Operations Centre.

Given the potential wide-ranging impacts of an actual nuclear incident, combined with the social forces of risk-perception, the error could create serious damage to public emergency preparedness efforts.

The action of issuing an alert to all Toronto residents for an incident, related to anything “nuclear”, stokes feelings of uncertainty and fear. Keep in mind that this alert was issued in the context of a city already traumatized by a disaster, earlier this week. Dozens of persons from Ontario were killed from an accident related to technology and human error when Ukrainian International Airlines Flight PS752 was struck by an anti-aircraft missile in Iran.

Risk perception can drive behavioural changes where fear is a more powerful motivator than rational actions. In terms of risk perception and nuclear power, there is a documented body of knowledge suggesting a perception gap between experts and the public in consideration of radiation risks shown in cases of public health threats and public attitudes. The public perceives nuclear power as having a higher risk than the dangers that are actually present. In light of these risk perception issues, scholars have suggested that there is a need to develop plans and materials for communicating with the public in the event of a nuclear disaster.

At first notice, a nuclear incident alert prompts an elevated level of concern. Its subsequent cancellation brings a rapid decompression when individuals learn that the consternation was created over nothing. The situation can lead to lack of trust in the authorities who are responsible for safeguarding the public in the event of an actual nuclear emergency.

Other false nuclear alerts
This false alarm is not the first time that a nuclear-related alert has been issued during in error during an exercise. In January 2018, an alert was issued in Hawaii warning of an impending ballistic missile attack. Thirty-eight minutes later, the alert was rescinded as a false alarm.

In the Hawaii case, similar to what happened in Ontario on January 12, a public alert was accidentally issued during a routine internal test of the Emergency Alert System. The Hawaii Emergency Management Agency released a statement that the false alert was due to human error.

Jeopardizing trust
Within hours of the false nuclear alarm, the office of Ontario’s Solicitor General released a statement of apology and said a full investigation has been launched into the error made during the routine training exercise. Those initial actions are only the first steps in attempting to repair the damage.

If we take the incident in Hawaii as a guide, the fallout was far-reaching. In the immediate term, all upcoming emergency drills and exercises were suspended. Changes were put in place, such as a two-person verification rule along with a new cancellation command system for public alerts. As the false alarm became a scandal, state-level emergency management officials resigned. Human error and poor software design were identified as root causes, and investigations suggested revamping the system, specifically in terms of oversight of the Integrated Public Alert & Warning System in the United States.

The bottom line is that a false alarm for an incident at a nuclear power station erodes public safety efforts. Fortunately, the risks realized from the Ontario emergency alert were not related to actual radioactive fallout. The fallout from the false alarm is that the public’s trust in emergency alert systems was jeopardized.

Jack L. Rozdilsky is an Associate Professor of Disaster and Emergency Management at York University, Canada.