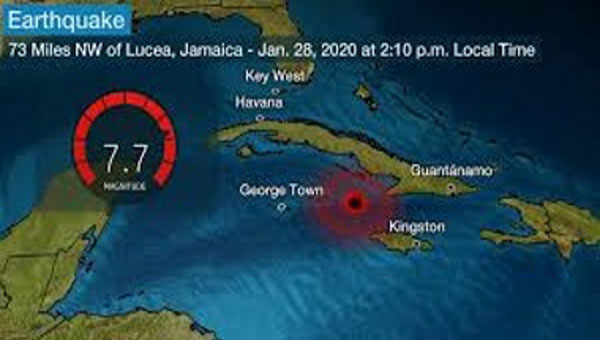 BRIDGETOWN, Barbados, January 28, 2020 (CMC) – An earthquake, with a magnitude of 7.7, in the strait, between Jamaica and Cuba, on Tuesday, triggered fears of a tsunami in several Caribbean countries, including Jamaica and the Cayman Islands. There were no immediate reports of damage or injuries.

“The event was strongly felt. It is likely that a tsunami was generated. As a precaution, move away from coastal areas, and if in low lying areas, evacuate, vertically, in strong, strong multi-story buildings,” the NIHM said, in a statement.

“If you are in a building that was structurally-damaged, remain outside in outdoor areas, as aftershocks are possible,” it added.

Residents on the Cayman Islands said that buildings have been evacuated, with one person telling the Caribbean Media Corporation (CMC) “my office complex is evacuated”.

The USGS reported that the quake occurred at 14.10 pm (local time) at a depth of 10 kilometers (km) in the strait, between Jamaica and Cuba.

It was also felt 72 miles, northwest of Lucas in Jamaica, at a depth of 6.2 miles.

USGS reported that countries affected by the earthquake include, The Bahamas, Cuba, Jamaica, Honduras and the Cayman Islands.

The earthquake is the largest since one, with a magnitude of 8.0, hit Peru, last May, killing two people.