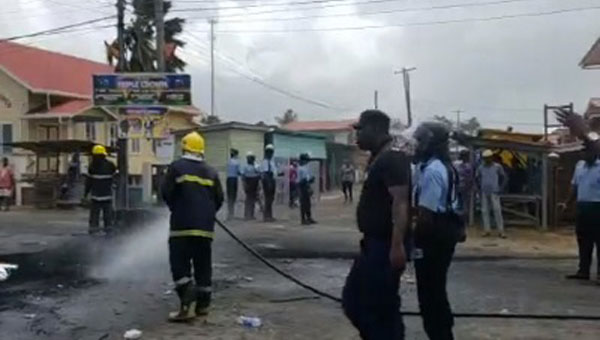 BERBICE, Guyana, March 6, 2020 (CMC) – The main opposition People’s Progressive Party/ Civic (PPP/C) urged supporters, today, to remain “calm and act in a peaceful manner”, after they staged a fiery protest in Berbice and along the East Coast of the country.

Party supporters took to the streets at the Bath Settlement, Public Road, West Coast Berbice, and Lusignan, on East Coast Demerara, in protest at what they said were efforts to rig the elections.

They blocked the road with burning tyres, and chanted “Granger must go”.

“I want to urge the supporters of the People’s Progressive Party/Civic to remain calm, stay at home, do not break the law,” PPP/C’s General Secretary, Bharrat Jagdeo, said, in a video statement, posted on the party’s Facebook page, today.

“I can understand the sense of frustration, the anger in these communities, and the fear that the (David) Granger party and administration is trying to steal the elections, before our very eyes,” he added.

Yesterday, the Guyana Elections Commission (GECOM) released to the media, results for Region Four, showing the ruling coalition — A Partnership for National Unity plus the Alliance for Change (APNU+AFC) — defeating the PPP/C, by more than 59,000 votes, and securing another term in office.

GECOM Public Relations Officer, Yolanda Ward, forwarded, without comment, images of Statutory Declaration Form 24, which showed the incumbent APNU+AFC securing 136,335 votes, while the PPP/C earned 77,258, resulting in a difference of 59,077.

In the statement, the PPP/C said that while it understood the “hurt, frustration and fear about electoral fraud being perpetuated against the Guyanese people, we have the solidarity of the international community”.

It noted that statements have emanated from the diplomatic community in Guyana, the international election observer missions, among others, indicating that the results of the elections “cannot be credibly declared”, and there can be no swearing-in of a president, since such an action would be illegal.

“The PPP agrees with the international community; there can be no swearing-in of a new president, under the current circumstances. The Party wishes to also warn that public officers, especially constitutional office holders, facilitating such an illegal action, would be complicit in the perpetuation of electoral fraud in Guyana,” the statement pointed out.

The PPP/C said that it was urging supporters “to ensure that none of their actions are in contradiction with the laws of Guyana”, and that they should “stay home and await further guidance from the party”.