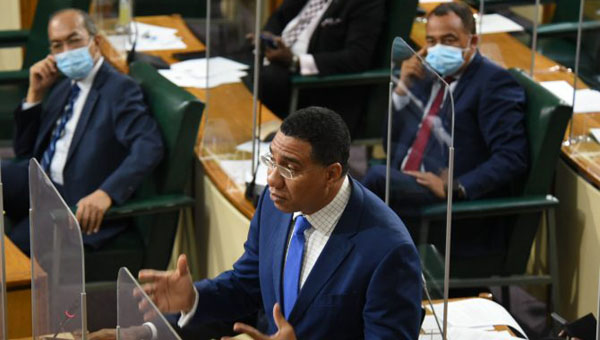 Jamaica's Prime Minister, Andrew Holness, said the government sees music and culture as a part of the country's economic recovery, and, as such, will allocate funds towards the industry. Photo credit: Michael Sloley/JIS.

The island-wide curfew is part of measures, aimed at containing the spread of the coronavirus (COVID-19).

In addition, the gathering limit will be reduced from 15 persons to 10 persons nationally.

Prime Minister Holness said the country is seeing increased hospitalisations, across the island, and noted that the island-wide hospital census is showing significant occupancy levels, across the health regions.

“Additionally, there are a number of hospitals, across the island, that are at, or above, 90 percent occupancy level, and this includes the May Pen Hospital, Kingston Public Hospital and Spanish Town Hospital,” Holness disclosed.

“What we are seeing here, having interrogated this data, is that there is need for a greater sense of urgency, both on the part of the government in our response, but more so, on the part of the citizens. You have to take greater personal responsibility,” he added.

The Prime Minister also pointed to the questions on persons’ minds, as to whether the spread the country is now experiencing is related, in any way, to the new strains or variants of the SARS-COV2 virus.

“The Ministry of Health and Wellness has advised that as part of their surveillance activities on new variants, they have sent off for genome sequencing, 14 positive samples from travellers from the United Kingdom and, later this week, plan to send off another 101 samples, randomly selected by parish,” he informed.

He said that the results from genome sequencing “will give us better insights into how prevalent the new variants, if they exist, may be in Jamaica”.

The Prime Minister said another question that persons have been asking is, whether the increased numbers are simply as a result of increased testing.

“While we have certainly increased our testing capacity, it is important to note that we have not changed our criteria for testing. Our testing has always been based on our surveillance and is focused on suspected cases, either as a result of symptoms or contact tracing. We do not rely on random testing,” he said.

Based on the information received from the Ministry of Health and Wellness, as of February 8, 2021, Jamaica recorded 17,701 cumulative cases of COVID-19. Some 359 persons have died due to the pandemic, representing a two percent fatality rate currently.

The number of active cases, that is the number of persons who still have the virus, is 4,793. In the last 24 hours, Jamaica recorded 403 positive cases out of 1,935 samples tested, which is a test positivity rate of 20.8 percent.