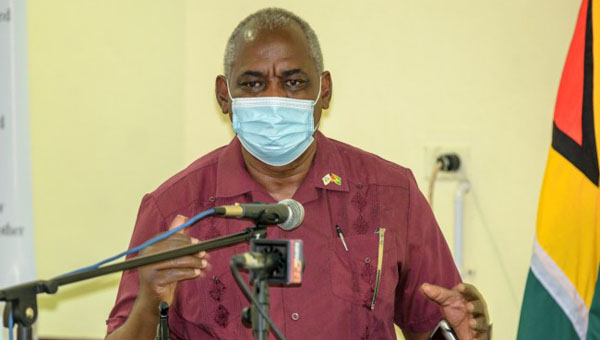 The Minister was, at the time, responding to a question, posed by the media, about concerns from the public about the recent execution-style killing of 42-year-old, Ricardo Fagundes, on Main Street, in Georgetown.

“I want to assure the public that we are working, hard, to eradicate lawlessness and, particularly, gun crimes in Guyana, and crimes of that sort. We are working hard with it. We are reviewing the posture, the procedures, the actions, which should happen, when there is such an event, so that we mitigate, prevent and deal with those who would get involved in that type of activity,” Minister Benn explained.

The engagement with the media occurred on the side-lines of the opening of the Guyana Fire Service Senior Officers Conference, yesterday.

The government, in the last two national budgets, allocated billions of dollars to bolster the country’s crime-fighting capability. In the 2020 Emergency Budget, over $1 billion was allocated for the modernisation of several police stations and divisional headquarters, countrywide.

Added to that, some $428.1 million was earmarked for the procurement of 50 vehicles to ensure police officers could respond to crimes in a timely manner.

Meanwhile, $830 million has been allocated in the 2021 National Budget for the rehabilitation and maintenance of the Providence, Ruimveldt, Cove and John, Albion, Whim, Parika and Wismar police stations, among others. Additionally, 828 police ranks will undergo training in 20 different courses to improve their investigative and forensic capabilities.

The government is also resuscitating the Community Policing Groups (CPGs) — which Minister Benn, last November, said play a key role in fighting crime — with $95 million allotted to them, to strengthen neighbourhood patrols and visibility.