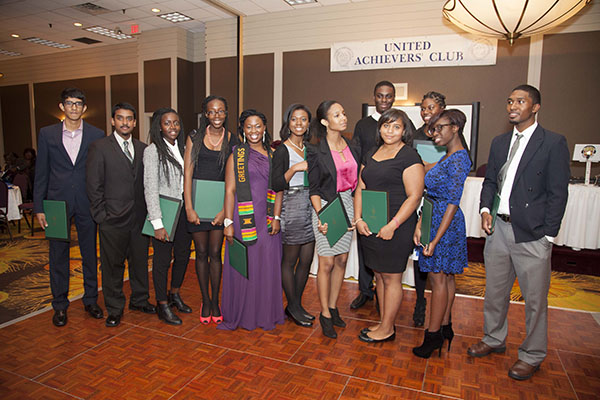 The United Achievers’ Club of Brampton has presented fourteen outstanding students with scholarships to help them in their pursuit of tertiary education.

For the past twenty-nine years, the organization has been presenting scholarships to outstanding students of Black and Caribbean heritage.

The presentations were made at the United Achievers’ Club 29th annual scholarship and recognition awards held at the Holiday Inn in Brampton, Ontario on September 21.

The scholarships are presented annually to students based on their academic achievement, extracurricular activities and community involvement. Since 1985, the United Achievers’ and its partners have assisted 300 students in their pursuit of tertiary education, providing them with approximately $299,000 in tuition assistance.

Bahadur, 18, a graduate of Louise Arbour Secondary School is enrolled in the Bachelor of Health Sciences program at McMaster University. He said through his involvement in and out of school he grew a lot as a person and was transformed.

“It’s really an amazing community. They’re always so supportive, it’s just really interesting, I love it,” he said about his work with the special needs community.

Wilkinson, 17, is a graduate of St. Augustine Secondary School and is enrolled in the Creative Industries program at Ryerson University. She intends to one day start her own PR firm.

She was the leader of the marketing and advertising team for her school’s Girls Night In event, and a member of the students’ council.

Since Grade 8, Wilkinson wanted to go to Ryerson to pursue journalism but after checking the course curriculum and seeing that she would be studying journalism from the 1700s, she changed her mind.

She stumbled upon public relations, thought it was interesting because is also involved event management.

Her studies in fashion, communications and business are all embedded in the creative industries program, which is perfect for her.

In the past, Jagan, 18, felt that he had not connected as much as he could have with his cultural heritage.

The Turner Fenton Secondary School graduate, who is enrolled in the Bachelor of Health Science (Honours) program at McMaster University, said the scholarship has motivated him to take more ownership of his identity and cultural background.

Both of his parents are from Guyana and he has only been once but intends to go again. His grandfather was the brother of Guyana’s former president, Cheddi Jagan, who was also considered the “father of the nation.”

Keynote speaker, Paulette Senior, CEO of YWCA Canada, the oldest and largest multi-service women’s organization in the country, issued a charge to the students to help others as they achieve success.

Reflecting on the United Achievers’ motto “achieving together,” she told the students that while society considers individual independence an indicator of success, it is okay to depend on each other to achieve together.

“I bring a different message – one that embraces togetherness and unity; one that says success is empty and meaningless if you are not helping, supporting, advising and lending a shoulder to someone else. Achieving together to me is the ultimate of uplifting yourself and others and thus raising an entire community to also achieve,” she said.

Senior supports the tenet that everyone possesses the ability to succeed and what holds him or her back is lack of the right type of support needed to break through the gap.

“One of my greatest joys is seeing, encouraging and praising the potential in young people. Youth is precious and fleeting and if misdirected, can result in years of regret, catching up – or worse, wasted lives as we’re seeing right now in the GTA. You know what I mean – where children are killing children – where lives have been cheapened to such depths that we are all shaking our heads not knowing what’s going on,” Senior said.

The YWCA CEO said generations of children are being lost at alarming rates and she thinks this calls for a reversal of this idea of individual independence. Instead, she said she believes in community and giving back.

“Life will come at you – most often not as you expect it – and in shapes and sizes you don’t even recognize. The key to success is not your ability to dodge or hide. It is to meet these challenges head on as if you expected them. As if to say – is that all you got? With a type of fortitude and belief that come what may, you will get through because you were created for success. Giving up is not in your lexicon; carrying on is,” she charged the students.

Lucinda Sloley, president of United Achievers’, congratulated the parents and guardians for instilling in their children the importance of obtaining a higher education.

Susan Fennell, mayor of Brampton and honorary chair of the awards, said the organization’s success is rooted in service and it has earned a reputation as a community organization that promotes peace, fellowship and social harmony.

Established in 1980, the United Achievers’ Club of Brampton, a non-profit organization, was founded by Canadians of Black and Caribbean heritage to provide opportunities to express their culture and add to the rich multiculturalism of Peel Region.