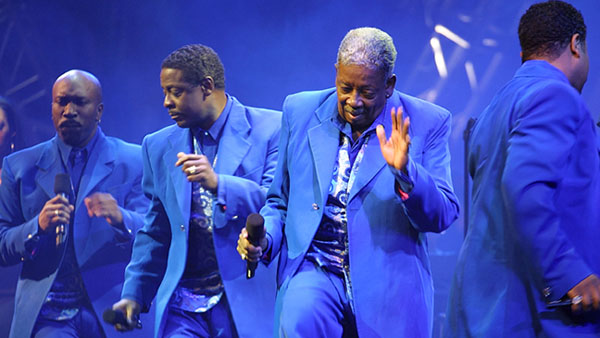 Photo above: Winfred “Blue” Lovett, second from right, leads The Manhattans in a rendition of one of their famous tunes.

Bivins provided the top of The Manhattans’ harmony and Lovett was the bottom man. Bivins and Lovett wrote some of the groups greatest hits. Bivins penned the classic “There’s No Me Without You” and Lovett came up with the group’s biggest selling record, “Kiss and Say Goodbye”.

The group was signed by Carnival Records in 1964, and later with Deluxe Records, (a subsidiary of King Records). They had minor hits with these two labels. When I moved to Toronto, I was turned on to The Manhattans by Jamaicans. A close friend of mine, J. Alexander Francis, always talked about songs like “Follow Your Heart” and “The Picture Became Quite Clear”. Having grown up in Los Angeles, I was not that familiar with The Manhattans. The Manhattans had next crossed-over to the left coast.

Tragedy hit The Manhattans late in 1970, when Smith fell down a flight of stairs and took ill. The group recruited Gerald Alston, a North Carolinian, who loved Sam Cooke. The original front man for The Manhattans died of a brain tumor on December 16, 1970. The group moved to Columbia Records in the 1970s and struck gold with Bivins’ “There’s No Me Without You” in 1973. This was followed by Lovett’s “Kiss and Say Goodbye”, which topped both the R&B and the Pop charts.

I met Lovett for the first time in 1976, when The Manhattans and the Stylistics performed at O’Keefe Centre (now the Sony Centre). Columbia Records put Lovett and me together for an interview. I saw and met the group every time they performed in Toronto, and also saw them in Buffalo, N.Y. and Southern California. There were two sets of Manhattans – one set led by Lovett and the other set led by Bivins. I also saw Bivins’ group in Toronto.

The last time I saw Lovett and Alston’s group of Manhattans was in Southern California in 2012, when they shared the stage with Honey Cone and others. Lovett and Alston always supported the late Milton “The Voice” Blake and myself. They also appeared on Spider Jones’ show with me several times. Lovett and Alston supported CKLN-FM 88.1, Radio Regent, Uhuru Radio and the Burning Spear newspaper. 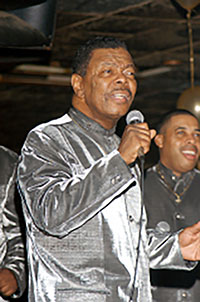 Lovett and Alston were always generous with me, my family and friends. I recall seeing The Manhattans, Russell Thompkins Jr.’s set of Stylistics, and Stephanie Mills with the Whispers headlining. This was the Whispers’ hometown. My nephew Gysai went with me and he dug the show. Lovett and Alston also looked after Killu Nyasha once when they performed in the Bay Area. She told me she received first class treatment from The Manhattans.

While I was closer to Lovett and Alston, I did see Bivins’ set of Manhattans in Toronto once. By 2000, there were two sets of Manhattans: Charles Hardy, Harsey Hemphill Alvin Pazant, Wade Taylor joined the group in recent times. Taylor was replaced in July 1991, when Bivins recruited Lee Williams, the person whom they had originally wanted to replace George Smith. These gentlemen along with Bivins were the second set of Manhattans.

Lovett and Alston were joined by Troy May and David Tyson, the brother of Temptation Ron Tyson. The Manhattans were featured on Cathy Hughes’ TV One’s “Unsung” earlier this year. This episode traced The Manhattans 50 plus years in the business. The group has performed in North America, Jamaica, Chile, Europe, Japan, Namibia, Botswana and South Africa. When I first met Lovett he informed me that The Manhattans would not perform in South Africa as long as apartheid was in place. The group kept their word and didn’t appear in South Africa until 1999, when they recorded the album, “The Manhattans Live From South Africa”.

Vocal groups are a dying breed in this period. There are two sets of Manhattans, Stylistics, Delfonics and the Dramatics out on the road. The corporate world is only concerned with moving units—they care nothing about the artists or the art form.