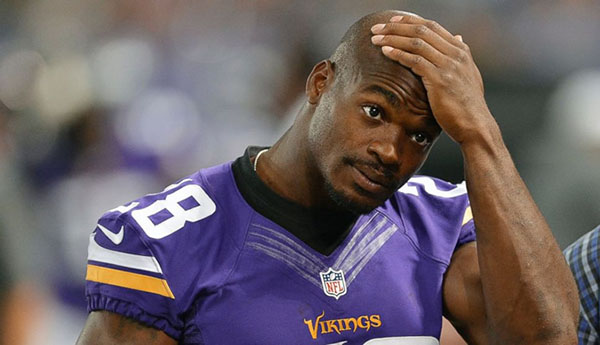 Sioux Falls, South Dakota, police said Joseph Robert Patterson, 27, has been charged with aggravated battery of an infant and aggravated assault. If convicted on the charges, both felonies, Patterson could face up to 40 years in prison and an $80,000 fine.

Patterson is the boyfriend of the child’s mother.

On Sunday, two days after the tragedy, Peterson played through the pain when the Minnesota Vikings took on the Carolina Panthers.

“Even if it’s bad, I try and take the good from it. That’s the way I approach life, with all situations,” Peterson told reporters after the game. “I never thought about not playing. It was all about going out there and praying that I had the strength to get through and help my team, so that was my focus.”

“I can’t imagine, you know, the heavy heart that he had today, being out on the field. But he spoke to us right before the game, right before he took the field and said he was going to give it his all, for all four quarters, and that’s exactly what he did,” Rudolph said.

The Vikings lost 35-10 to the Carolina Panthers but was not due to lack of trying.