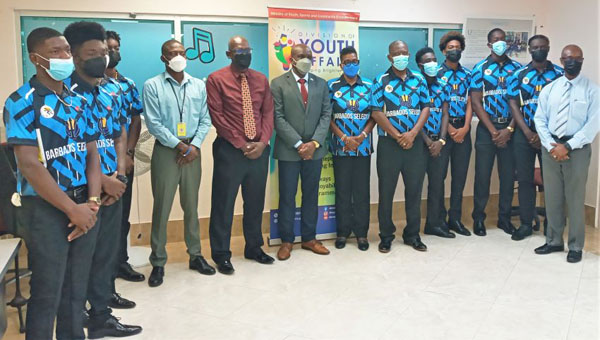 ST. MICHAEL, Barbados (Wednesday, June 22, 2022) — The West Indies will be represented at the inaugural Under-19 Cricket Tournament, being held at the University of Pretoria, in South Africa.

Minister of Youth, Sports and Community Empowerment, Charles Griffith, greeted the newly-selected members of the West Indies Under-19 team, this morning, at the Ministry, in Haggatt Hall, St. Michael.

Minister Griffith impressed upon the team members that this was an opportunity to be ambassadors for their country and to showcase their talent.

“You are ambassadors and that must be foremost in your mind, when you travel to represent [your] country.  All of you are fortunate, because there are… a lot of cricketers on the island, but you were the ones selected to represent us at this particular competition in South Africa.

“One of the things that I’m hoping is, that you do your personal best. Now that might seem strange, because we normally associate personal best with track and field and other sports, where there’s timing in that, but if you, as a cricketer, do your personal best, if you’re a batter and you do what you figure is the best that you can offer on the tour, then you’re contributing to the collective,” he stated.

Coach of the Under-19 team, Norman Puckerin, thanked the Minister for all the assistance that was given by the Ministry. “My heart-filled respect to you [Minister Griffith] and your department for supporting us, and giving that donation towards us that will take us to South Africa,” he added.

Captain of the Under-19 team, Nimar Bolden, who is in Upper Six at Combermere School, said he was surprised to get the nod as captain, and he is ready to lead.

“I feel as though I am capable. And I have good skills, enough to lead the troops … to victory. I think we have a really good set of players. We, as a team, we’ve played before for Barbados with clubs and what not, so we’re familiar with each other. So, I think that for the team, we stand a good chance of winning the tournament,” he said.

The tournament, which bowls off on June 29, will have seven T-20s and three One-Day Internationals. It comes to an end on July 12.