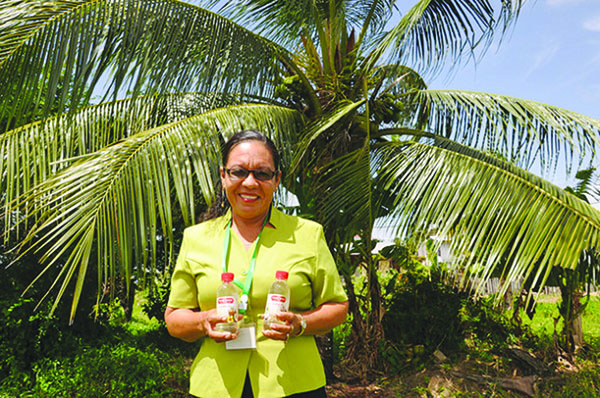 Climate Change A Mixed Blessing For Coconut Farmers In The Caribbean

GEORGETOWN, Guyana (IPS) – Climbing up the coconut industry has been anything but easy for Rosamund Benn, who has dedicated the past 32 years of her life working on a 50-acre coconut farm in The Pomeroon, a farming region of Guyana.

The Pomeroon borders the Atlantic Ocean to the north, the Essequibo Islands-West Demerara to the east, Cuyuni-Mazaruni to the south and Barima-Waini to the west. The area is characterised by large rivers with an abundance of farms and fruit, including and especially coconuts.

Benn, along with her daughter and husband, produces virgin coconut oil from their home. She says every batch of 400 dry coconuts yields five to six gallons of oil.

“It’s hard work. After gathering the nuts we burst and dig out the kernel, then we get it grated, then we wash the milk out. Everything is done by hand,” Benn, 48, told IPS. “Three persons doing that work can only do three batches per week so every week we produce between 15-18 gallons of virgin coconut oil.”

She says climate change has also been playing a big part in the amount of coconut oil she is able to produce.

But while most of the discussions about the climate change phenomenon centre on the negative impacts, Benn told IPS that for her and other farmers in The Pomeroon, climate change is somewhat of a blessing in disguise.

“During the hot weather and the drier dry seasons which we have been having here in Guyana, you get more yield from the coconuts,” she said.

Dr. Janet Lawrence, a Jamaican entomologist with the Trinidad-based Caribbean Agricultural Research and Development Institute (CARDI), agrees that there are some positive aspects to climate change. But she also noted that with increasing temperatures and a drier region, farmers should expect significantly more pests.

“The Food and Agriculture Organisation (FAO) has indicated that between 20 to 40 percent of coconuts and other crops are lost each year due to pests and diseases,” she told IPS.

Pamella Thomas, a farmer from Antigua and Barbuda, who is part of the Caribbean Farmers Network (CaFAN), told IPS that while members of her association were generally ready to deal with the impacts of climate change, most of the farmers in the Caribbean are older and it’s “a bit more difficult to educate them.”

In light of this she said CaFAN has embarked on a drive to get younger farmers on board.

“We are also on an educational drive because persons know climate change is happening but they need to understand the dynamics of what is happening and this requires education,” she said.

She noted that while agricultural science is taught in schools in Antigua the entire subject area needs to be revamped.

“You have the practical aspect of it being taught but the sad thing is they are still teaching the old method. There is no climate change aspect or protected agriculture aspect to it,” she told IPS.

Vilma Da Silva is a small coconut water producer who is also from The Pomeroon. She has been farming for more than 33 years. She laments what she described as the lack of support and recognition for women farmers.

“Farming is hard work and those in authority need to work with the farmers and encourage them to be on the farm,” Da Silva told IPS. “When you are a coconut picker you must be recognised that you are doing an excellent job and you are needed.”

Other challenges faced by women and other farmers in the Caribbean include poor drainage, high costs of production, lack of profitable markets and limited options for manufacturing and processing.

Da Silva said the area has the potential for producing large volumes of coconuts and its byproducts.

“We don’t use any fertiliser and we produce a lot. We don’t have pests and diseases. So The Pomeroon can stand on its own in terms of the coconut production for the virgin coconut oil and the coconut water,” she told IPS.

Farmers in the area have launched the Pomeroon Women’s Agro-Processors Association of which Da Silva is a co-founder.

Through the work of the Association in fruit processing for sale, the lives of its members and more broadly of farmers and women in the community have been transformed as women have been given the opportunity to manage their business and generate an income.

Her colleague, Benn, said her dream list includes secure markets, building their own local factory and expanding the production of virgin coconut oil for commercial purposes.

“We have the coconuts and everybody knows that. The Pomeroon has a wide variety of coconuts that’s being used for producing oil, not only for the water,” Benn told IPS.

In Guyana, coconut ranks third after rice and sugar in terms of acreage cultivated. It is estimated that there are currently 24,000 hectares of coconut cultivation across the country with an average annual production of 90 to 100 million nuts.

Coconut delivers a wide variety of products, including coconut water, coconut oil, coconut milk and dried coconut, which are all in demand regionally and internationally.

“Women were at home, often times with large families, and they needed to be occupied in order to sustain themselves,” Benn said. “Now we are able to sustain ourselves.”