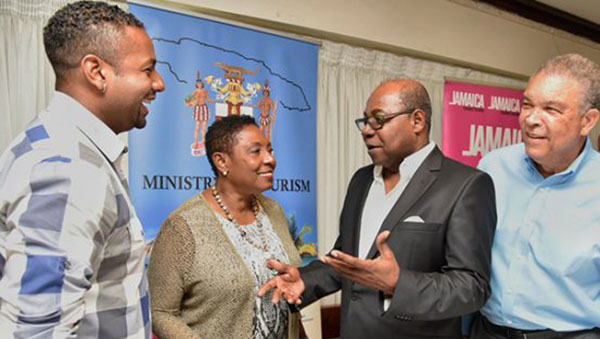 Minister of Tourism, Edmund Bartlett (third left), shares in conversation with (from left) Chairman of the National Carnival in Jamaica Stakeholders Committee, Kamal Bankay; Minister of Culture, Gender, Entertainment and Sport, Olivia Grange; and Acting Director of Tourism, Jamaica Tourist Board, Donnie Dawson. They were at the launch of Carnival in Jamaica 2018 at The Jamaica Pegasus hotel, New Kingston, on October 19. Photo credit: Donald De La Haye/JIS.

Entertainment A Major Source Of Growth And Development For Jamaica, Says Culture Minister

KINGSTON, Jamaica, October 20, 2017 — Minister of Culture, Gender, Entertainment and Sport, Olivia Grange, says the government is reinforcing entertainment in Jamaica as a major source of growth and development.

She noted that Reggae Month and Jamaica Carnival are two major projects under the rubric of festival tourism that will be strengthened in the upcoming year.

She was speaking at the launch of Carnival in Jamaica 2018, yesterday, at The Jamaica Pegasus hotel, in New Kingston.

Following the highly successful inaugural 2017 Carnival in Jamaica initiative, the government is again partnering with carnival stakeholders for this year’s staging.

Carnival in Jamaica will be the umbrella brand for all carnival-related activities during the peak period of March 31 to April 8, 2018, making it a national product.

The National Carnival in Jamaica Stakeholders Committee, under the Sports and Entertainment Network of the Tourism Linkages Network, is spearheading the initiative, which forms part of broader efforts to enhance and package various local entertainment offerings to attract more visitors to the island.

Grange noted that over the last 15 years, carnival in Jamaica has been the fastest growing event of its kind in the Caribbean.

She said the collaboration, over the past year, between her Ministry and the Ministry of Tourism, underscores the understanding that partnership is needed to propel a growing industry that is a contributor to the creative economy.

The Culture Minister said the unique nature of “our carnival is the infusion of Jamaican dancehall music and culture in events, and through collaborations between Jamaican artistes and soca/calypso artistes across the region”.

“This authentic Jamaican flavour, added to events, has led to increased visitor arrivals for the annual parade. The promotion of Jamaican culture, regionally and internationally, is an advantage to the annual staging of carnival in Jamaica that enhances our tourism product,” she pointed out.

Grange said that Carnival 2018 is about to be activated, with the first band, Xaymaca International, set to launch on November 11; Exodus on November 18; Bacchanal in January 2018; followed by Jamaica Carnival.

She noted that the carnival atmosphere will spread all over Jamaica, although the main events are held in Kingston.

Grange congratulated the four bands that will be participating in Carnival 2018, noting that the number is expected to grow to eight over the next few years.

Minister of Tourism, Edmund Bartlett, for his part, said that carnival is an opportunity to broaden the entertainment offerings of Kingston and increase tourist arrivals in the country.

He said a key objective of the Ministry is to encourage visitors to spend more and have a greater percentage of the tourist dollar remain in the country.

“And to do that, carnival must play a big role, because last carnival US$2.3 million was in circulation in the city of Kingston and … that is nearly J$300 million. If we double the size of carnival, can you imagine, that is close to J$1 billion in circulation. Who gets it? The little man… the hotels get a little bit (too),” he pointed out.