Guyana's Attorney General, Basil Williams, has given notice that he intends to appeal the ruling to the Caribbean Court of Justice, the region's highest court.

GEORGETOWN, Guyana April 21, (GINA) — Minister of Legal Affairs and Attorney General (AG), Basil Williams, indicated — at a press briefing, today, at the Attorney General’s Chambers — that the “Red House” usage is currently being considered by government.

He pointed out that the administration feels strongly about the Red House being used only as a research facility, to showcase one former president, as such, he believes that good sense should prevail and the People’s Progressive Party Civic (PPPC) should agree to its objective use.

“Red House is on prime government land and the situation (in which it was being used to showcase work by one past president) reeks of selfishness…we’re hoping and believe that all nine Presidents should have that opportunity,” Minister Williams explained. 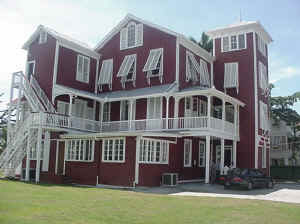 Minister of State, Joseph Harmon, during the 2015 budget debate, told the National Assembly that after millions were spent to renovate the structure on High Street, it was leased by the former administration to a private company for 99 years at a rate of $1,000 per month. Additionally, state funds are being used to pay its staff.

Whilst government intends to revoke the lease and to showcase the work of all the past presidents, meetings were held with the PPP to reach an amicable solution.

The Minister of Legal Affairs is on record as describing the Red House issue as a deceitful action that sought to rob the nation of its resources.

The lease agreement translates to $12,000 per year and approximately $1,188,000 over the 99-year period, which does not amount to a quarter of what was spent to build, renovate and maintain the building over the years.

The Red House or Kamana Court was once the official residence of the Colonial Secretaries and, prior to that, was occupied and owned by Sir Eustace Woolford, a former speaker of the legislature.

Dr. Cheddi Jagan lived there whilst he was the Premier of British Guiana in 1961 to 1964. The facility showcases the work of only Dr. Jagan.