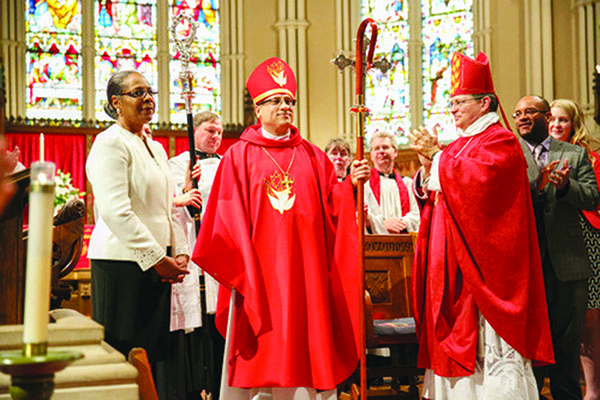 TORONTO, Ontario – If religion is meant to heal the soul, then Peter Fenty has been a dedicated practitioner long before he was consecrated Bishop on June 22, last year, in St. James Cathedral of the Anglican Diocese of Toronto.

While the occasion came with the responsibility as the bishop of York Simcoe, Fenty was also cemented in history, becoming the first Bishop of African descent within the Anglican Church of Canada.

“We just wanted to be part of this day,” said Ms. Valerie Davis, who attended Fenty’s consecration with her friend, Marjorie Taylor. “It’s so monumental.”

Ms. Davis said Bishop Fenty’s election on April 6 and consecration on June 22 created excitement in Barbados, where he was born and raised. “My family in Barbados was going nuts and the island was going crazy. Everyone was so excited.”

Ms. Davis was one of hundreds who arrived early to get a seat for one of the most anticipated services of last year. Before the doors of the church had opened at 9 a.m., the lineup stretched half-way down the block.

About 50 people flew up from Barbados and the United States for the consecration service and the Barbados High Commissioner to Canada and his wife also attended.

Several bishops and clergy from the Caribbean took part in the service, including Archbishop John Holder, who is the Bishop of Barbados and Primate of the West Indies, and who advised Bishop Fenty during his sermon: “Go forth to plant and water, but never forget that God, and God alone, gives the growth.”

On Saturday, February 22, the popular, esteemed and well-respected Bishop Fenty will be honoured for his unselfish, dedication to serving mankind, with an African Canadian Achievement Award (ACAA) for Excellence in Religion.

The ACAA, which was founded and established in 1985, recognizes and honours exemplary, high-achieving African Canadians, who have excelled in a diverse array of vocations and professions. During its 28-year history the ACAA has paid tribute to over 350 prominent African Canadians, and provides excellent role models for the community’s youth.

Ordained to the priesthood in 1975, Bishop Fenty’s passion for pastoral ministry afforded him to serve with distinction in five parishes in the Dioceses of his native Barbados.

In 1992 he accepted an invitation to minister in Canada, assuming the role of rector at St. Lawrence Church in Montreal, a parish with a significant Caribbean population.

Five years later, he became the incumbent of St. Joseph of Nazareth in Brampton in the Diocese of Toronto. In 2003 he was appointed as the Executive Officer to the Bishop of Toronto, and Archdeacon of York where he laboured, learned, taught and grew for a decade.

A graduate of Codrington College and the University of the West Indies, Barbados and Huron College of the University of Western Ontario, Bishop Fenty holds: a Diploma in Theological Studies; Licentiate of Theology; Bachelor of Arts in History, Sociology and Theology; and a Master of Divinity with honours.

Though tasked with various ecumenical responsibilities, Fenty remains involved in the communities in which he ministers and is a strong advocate for social justice, human rights and ecumenism. This is reflected in the many organizations, committees and boards on which he served. They include, Chair of the Partners in Mission Committee and the Anti-Racism Implementation Group of the Anglican Church of Canada, the Diocese of Toronto’s Social Justice and Advocacy Committee and the Multicultural Committee.

As is now evident, this unassuming member of the clergy is no stranger to service. While in Barbados, Fenty served as Chaplain to the University of the West Indies (Cave Hill), the National Union of Public Workers, St. Gabriel’s Anglican School and Honorary Chaplain to the Barbados Defence Force. He was also the deputy chair of the Barbados Community College Board of Management 1989-1992. A skilled orator, he also hosted a radio talk show at two radio stations.

Bishop Fenty was a member of the International Afro-Anglican Co-coordinating Committee for the 2005 conference held in Toronto. He has been the recipient of various awards including the Pride of Barbados Award and the 2013 Barbados Independence Award.

The epitome of excellence, Bishop Peter Fenty is the pride of his family, his church, his community and his people. His own words shed light into why he is held in such high regard.

“I want to see our church become more missional in its thrust, and that’s what we’re already doing,” he says. “I want to affirm the lay leaders in our church, who do great work. I want to see the raising up of vocations, particularly those in what we call ethnic congregations.”

On the same evening that Bishop Fenty receives his award, 14 other high-achieving, successful African Canadians will also be recognized and paid tribute to, with ACAAs, for excellence in their chosen professions. They are:

> Excellence in Business: Steve Kirton is the President of the Barbados Ball Canada Aid (BBCA) and the former Vice President of Credit Risk Management & Strategic Initiatives at the Business Development Bank of Canada (BDC);

> Excellence in Education: Dr. Elizabeth Sinclair-Artwell is a superintendant of Education with Peel Region;

> Excellence in Media: Nick Davis is the Manager of program development for CBC Radio;

> Excellence in Parenting: John and Avril Mills are successful parents of Emily, Courtney and Adrine;

> Excellence in Politics: Sheila White, President of WORDS Media & Communications Inc., is a former advisor to the NDP’s Howard Hampton and Andrea Horwath and Mel Lastman, when he was mayor of the former city of North York;

> Excellence in Science: Patrice Smith PhD is a professor and neuroscientist, specializing in research in molecular mechanisms mediating repair of the damaged central nervous system;

> Excellence in Sports: Dr. Ivan Joseph is the Director of Athletics at Ryerson University;

> Founder’s Award: Gordon Cressy is the President of the George Brown College Foundation and former CEO of the United Way.

> and the Lifetime Achievement Award: Dr. B. George Blake, a retired clinical psychologist, is also a storyteller and former Buddhist monk.

The 2014 ACAA recipients will be presented with their awards at a Black History Month gala, which will be held on Saturday, February 22 at the Jane Mallett Theatre, inside the St. Lawrence Centre for the Arts, 27 Front Street, East, in downtown Toronto.

Photo by Michael Hudson/Diocese of Toronto.