New in Pride
Home / International News / Calls For Guyana’s President To Concede Are “Most Ridiculous And Nonsensical”, Declares Joseph Harmon 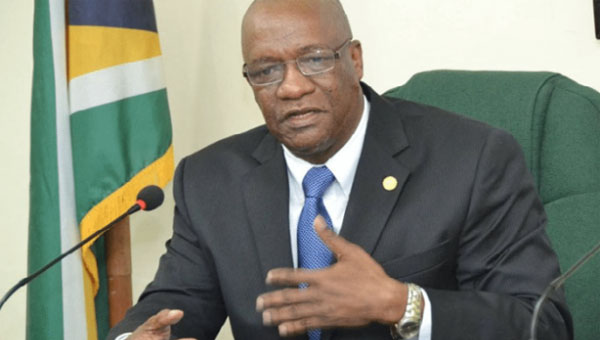 The APNU+AFC (A Partnership for National Unity plus the Alliance For Change) coalition's Campaign Manager, Joseph Harmon.

Calls For Guyana’s President To Concede Are “Most Ridiculous And Nonsensical”, Declares Joseph Harmon

GEORGETOWN, Guyana June 29, 2020 — Calls for President, David Granger, to concede defeat, resulting from the March 2 polls, will not be heeded, as he remains, and will continue to be, the President of Guyana, asserted the APNU+AFC coalition’s Campaign Manager, Joseph Harmon, yesterday morning.

Such propositions, the Campaign Manager declared, are “most ridiculous and nonsensical” and cannot be taken seriously.

Harmon was speaking, yesterday, on Antigua and Barbuda’s 104.3 Nice FM, Lite 104.1 FM and 104.3 Power FM, and providing an update on the current political state of affairs, here.

While the Court of Appeal has already ordered the Guyana Elections Commission (GECOM) to consider ‘more valid votes cast’, to determine the credibility of the elections, and although the matter is now sub judice before the Caribbean Court of Justice (CCJ), there have been calls, both locally and internationally, for the President to concede to an election of fraudulent votes, he observed.

“It comes from a narrative, overtaken by time. Given the report, submitted by the CEO to the commission, showing that President Granger’s coalition with the majority of the valid votes cast after the recount, and still people are calling on him to concede. Concede to what, concede to who. What is he to concede to?” Harmon responded when asked about the calls.

According to Harmon, the coalition government is still waiting to commence the promised “decade of development”, which, it projects, will benefit all Guyanese, despite political affiliation.

“The expenditure to be made on health, education, public infrastructure, defence, agriculture, eco-tourism, housing, small and medium-size business, among other things, is all an exciting prospect. So, for those persons calling for Mr. Granger to concede, that is not going to happen,” he proclaimed.

The coalition campaign manager noted that the APNU+AFC has reached out to a number of Prime Ministers, all across the Caribbean region. From the interactions, he said it is clear that those Heads of Government would prefer to see the situation dealt with, by Guyanese, as a sovereign State.

“They say they would prefer not to make any comments and influence, in any way, a process that is distinctly Guyanese.

“GECOM is the only entity responsible for elections. I will caution all persons, who have been influenced to make prejudicial statements, (to) refrain from doing so, because our process is a constitutional one, a legal one,” he said.

Harmon urged Guyanese, both home and abroad, to be patient and “keep your head up Guyanese; we have a few days to go. Wherever you are, across the world, don’t stop the progress”.