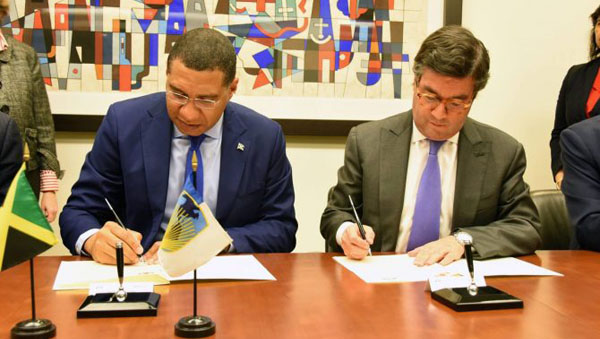 Jamaica Prime Minister, Andrew Holness, signed a US$285-million contingency credit facility with the Inter-American Development Bank (IDB) that will provide the country with immediate financing during the emergency recovery phase, after a sudden event.

The agreement was signed, on Monday, during a brief meeting with IDB officials in Washington DC, where the Prime Minister is attending the International Monetary Fund (IMF) Conference on “Building Resilience to Natural Disasters”, from November 26 to 28.

The loan is intended to buffer the financial shock of a disaster on Jamaica’s fiscal balance, thereby increasing the nation’s financial stability and efficiency, as well as its disaster-preparedness and response.

The contingent financing, funded from the IDB’s Ordinary Capital, has a maturity period of 25 years, a grace period of 5.5 years, and an interest rate, based on the London Inter-bank Offered Rate (LIBOR). This is a benchmark rate that indicates how much it costs banks to borrow from each other. The executing agency will be the Ministry of Finance and the Public Service.

Meanwhile, speaking at the IMF Conference, on Monday, Prime Minister Holness said governments in the Caribbean must continue to acknowledge the importance of including disaster risk management in fiscal policy frameworks, to efficiently and financially safeguard future development.

“We are thankful for the teams at the IDB, IMF and World Bank for the continued support that your organisations are providing to our region, with respect to climate resilience-building. That support has been helpful in the pursuit of a development pathway that is consistent with Agenda 2030 Sustainable Development Goals,” Holness said.

Jamaica Denies Any Case Of Coronavirus