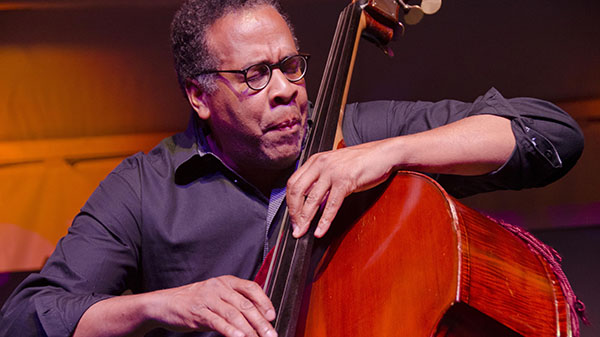 Standing ovations for every song played. That was the way the night unfolded for Stanley Clarke, as the man referred to as the most celebrated bassist in the world closed the 2014 TD Jazz Festival performances at Toronto’s Nathan Phillips Square.

“I was 18 once” said Clarke before introducing his young band members to the audience, a statement which resonated with those who know that, like his prodigies, Clarke kicked off his career as a teenager; at 18 playing with the legendary drummer Art Blakey.

Performing a brand of Jazz full of high energy funk, rock, Latin and classical influences, Clarke and his prodigies took the audience on a Jazz ride that ranged from edgy to light, breezy and romantic.

However it was Clarke’s tribute to George Duke, with the trio’s performance of Brazilian Love Affair that gave the crowd the night’s first taste of the four-time Grammy winner’s ownership of the acoustic base.  With incredible dexterity and throughout the evening Clarke crafted notes along every section of his bass at times transforming its curved wooden body into a resonant drum.

Of the night’s lineup the song No Mystery, from Clarke’s early days performing in the Jazz Fusion band Return to Forever, the piece Brazilian Love Affair and his 70’s super hit School Days, stood out for the story they told about mastery and promise.

It was clear, the master performer, producer and composer had brought two young men with enormous promise to Toronto and that all night long they shared with the audience Jazz loaded with entertaining compositions that honoured the genre’s improvisational roots.

Clarke, Gochiasvili and Mitchell used their instruments Saturday night their way, to shout, wail and at times speak quietly to each other delivering a young, fresh unforgettable jazz fusion experience.

On the final day of Toronto’s Jazz festival, Rolling Stone magazine’s first Jazzman of the Year and the man who took the instrument once relegated to the back of the bus front, centre and into the spotlight worldwide, delivered a performance that demonstrated his virtuosity and the genius jazz has on tap for generations to come.