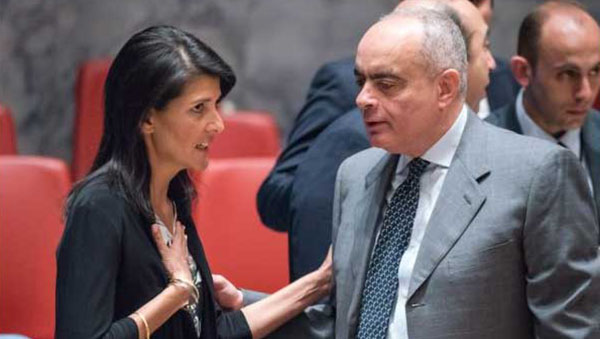 UNITED NATIONS, New York June 30, 2017 (IPS) — Five months into her stint as United States ambassador to the United Nations, Nikki Haley faced two days of often-sharp questioning on June 27 and 28 by influential panels of the United States Congress. They demanded justification for the Trump administration’s decision to slash funding to the United Nations, particularly cuts to the UN Population Fund, Unicef, UN Women and the World Food Program.

Concerns were also raised about the wisdom of reducing the US budget contributions to peacekeeping from 27 percent to 25 percent (which cannot be done unilaterally without incurring arrears) and by squeezing peacekeeping missions around the world. Haley was proud to note that funds for the mission in Haiti were being cut by $150 million, though Secretary-General António Guterres just named Josette Sheeran, special envoy on cholera in Haiti, the poorest country in the Western Hemisphere. Cuts to US contributions to the International Atomic Energy Agency in an era of nuclear proliferations were also questioned.

Haley also proudly told Congressional members that the US got the UN General Assembly budget committee this month to reduce the annual peacekeeping budget. In fact, the US aimed for $1 billion in cuts but agreed to about half that amount, for a total yearly budget of $7.3 billion.

Paradoxically in her testimony in Congress, Haley bemoaned the lack of equipment for peacekeeping troops (the mission in Mali desperately needs armored tanks), which could be financed through a more generous UN budget and save lives.

The tone of questions asked to Haley by Congressional members may suggest that Trump’s 2018 budget will not get significant legislative support on UN-related issues, yet there remains a hard core of Republican legislators who — not always clear on facts or context on how the organization works — are dismissive and insulting. Among them and other groups, a strong pro-Israeli lobby continues to function and may have been strengthened by Trump’s team.

Haley acknowledged pressure from Israel — calling it “support” — that led to the US forcing Guterres, the secretary-general, to reverse the appointment in February of Salam Fayyad, a former Palestinian prime minister, as the UN’s special representative for Libya. Fayyad’s appointment apparently was not initially opposed by Haley. Asked by a member of Congress about the last-minute about-face in the US on Fayyad, Haley said that because Palestine was not recognized as a country by the US, a Palestinian should not be given an official UN post.

In this case, she said, appointing him would add to the UN’s “imbalance” against Israel. She would not say clearly whether Israel forced the change in the original US position or whether a Palestinian could ever be approved for a UN post.

On her first day testifying before Congress, Haley was questioned by a House of Representatives appropriations subcommittee dealing with funds for international organizations; on the second day, she faced the full House committee on foreign affairs. A consummate politician, Haley performed well, skirting some issues, although generally showing unwavering support for the Trump team and the president himself.

“We are on the same page,” Haley said of Trump, who seems to approve of her tough talk in the international arena and his voice at the UN. “I don’t go rogue on the president.”

Yet, she added later that “this administration does not tell me what to say or not to say.”

In an interesting interlude amid the questioning by appropriations committee members, Haley revealed that the most recent threat to Syria’s president Bashar al-Assad and his backers, Russia and Iran, should another Syrian chemical weapons attack occurred, was just a threat by the US, with no action planned.

The goal, she said, was “to send a message” not only to Syria but also to Russia and Iran to get them to “back off.”

On the zeroing out of US funds for Unicef from the proposed 2018 federal budget, about which members on both committees voiced a range of reactions — from disbelief and disappointment to shock and outrage — Haley breezily replied to one questioner that the “starting point” of the budget was to build up the military and look for cuts everywhere else.

She did not react when Rep. Gerry Connolly, a Democrat from Virginia, asked whether the world’s children — through slashing Unicef — should have to pay for the US military buildup, saying it was “not a proud value that Americans would uphold.”

Members of Congress, many of them Democrats shut out of policymaking in a House of Representatives controlled by the Republican party, also wanted to know why the US appeared to have an incoherent foreign policy. They noted conflicting pronouncements in President Trump’s tweets and public flip-flops; measured statements by Secretary of State Rex Tillerson; and declarations by Haley that seemed to be her own opinion at times.

Putting it mildly, the US has become “unpredictable,” a legislator said.

Pressed to describe her relations with her bosses in Washington, Haley revealed to the foreign affairs committee that she rarely talked with Trump or Tillerson and had no information on the unusual number of vacancies in the US State Department. She said that her closest relationship was with the national security adviser, H.R. McMaster, the defense secretary; James Mattis, with whom she spoke on issues concerning the UN; and others in the president’s cabinet, of which she is a member.

“We work as a team,” she said, adding that there was “a very organized process in place.”

On Russia, Haley stuck to her strong objections to the invasion of Crimea and Moscow’s incursions into eastern Ukraine, and accepted that Russia meddled in the 2016 US election. She insisted, however, that Trump was not involved in colluding with the election interference. Asked whether she had discussed with Trump the Russian involvement in the election, possibly at the direction or President Vladimir Putin, Haley said that topic had not come up because it was not a UN matter.

Haley faced many questions on the rationale for the total defunding by the Trump administration of the UN Population Fund, or UNFPA. The most persistent questioners came from Democrats, but they were not alone. Haley responded that there was nothing she could do about the full loss of funds from the US to UNFPA since it had been done by presidential order. She insisted that the money saved, about $70 million by current calculations, would go to similar US aid programs.

Those programs, however, strictly bar US funding for any international organization or NGO that assists or even counsels on abortion. Reflecting her lack of interest about the loss of money to UNFPA, she was asked how maternal health care was being replaced by the UN agency in the Zaatari refugee camp in Jordan, which she just visited. Although she admitted she didn’t know, she said the next day in Congress “I always just meet with women” when she had visited the refugee camps in Jordan and Turkey.

The Trump administration (and the George W. Bush administration) used debunked reports that the Population Fund’s work in China supported forced abortions there to stop financing the agency. Haley repeated the claim, but told the appropriations subcommittee that the UNFPA was “associated” with a “company” in China that was guilty of involuntary “sterilization.” She did not repeat that formulation in the foreign affairs hearings, but Lois Frankel, a Democrat from Florida, called the China reason a “totally phony excuse.”

“A lot of women are going to suffer,” said Ami Bera, a Democrat from California and medical doctor, said about the cuts to the Population Fund.

Much of the hearings were consumed by repeated questions and criticisms of the Human Rights Council. Haley repeated what she said in her confirmation hearing in January about the Council needing to be “fixed.” She has never said plainly that the US is considering withdrawing from the 47-nation body. But in Geneva in June, Haley, saying she had come to see the Council firsthand, made a brief appearance (about three minutes) in the chamber to announce her presence.

Later that day in a speech to the Graduate Institute of Geneva, she warned that the US could “go outside” the Council to protect human rights if two nonnegotiable conditions were not met.

In that speech, Haley demanded that the Council change its election procedures (which would have to be done by the General Assembly) to “keep the worst human rights abusers from obtaining seats on the Council.” That would mean ending the open election of Council members, who are now chosen regionally by consensus, or horse-trading.

“As it stands, elections for membership to the Council are over before the voting even begins,” she said. “No competition means no scrutiny of candidates’ human rights records. We must change the elections so countries are forced to make the case for membership based on their records, not on their promises.”

Her second demand was that a Council agenda provision — known as Item 7 — which perennially singles out Israel for condemnation, “must be removed.” That command has garnered wide bipartisan support in the US, and American diplomats have been successful in recent years in reducing the number of obsessive resolutions on this issue, which will not be open to debate again until 2020. In Congress, Haley pointed to Egypt, Pakistan and Saudi Arabia as providing the “hard core support” for Item 7.

To which Connolly, the representative from Virginia, proclaimed that Trump’s decision put the US in the same boat as Nicaragua and Syria.