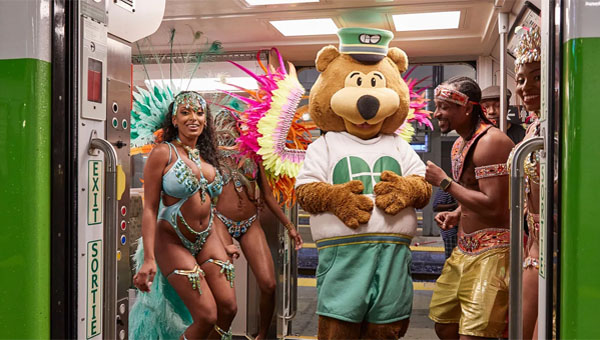 Metrolinx is once again ready to bring thousands of revellers to Exhibition Place, the starting point of North America’s largest celebration of diversity and freedom. Photo credit: Metrolinx.

TORONTO, Ontario (Friday, July 29, 2022) — After two years of pandemic life, the return of Toronto’s biggest celebration of Caribbean culture, is in full swing.

For the first time in two years, the city will see the return of elaborate costumes, Caribbean music, food and the Grand Parade, an annual event held steps away from Exhibition GO Station.

‘On De Road Again’ is the official slogan and hashtag for this year’s event, and Metrolinx is once again ready to bring thousands of revellers to Exhibition Place, the starting point of North America’s largest celebration of diversity and freedom.

For decades, GO Transit has helped thousands of carnival-goers get to the main parade and, this year, the transit agency is making it easier to get there, with $10 weekend day passes and $15 weekend passes.

“For events like these, the traffic is a nightmare and parking is always a gamble,” explained Metrolinx’s Chief Planning Officer, Karla Avis-Birch, whose parents are originally from Trinidad and Tobago.

“That’s why we plan for these events and we encourage everyone to take advantage of our weekend passes, and purchase them ahead of time online.”

On De Road and in style
Now in its 55th year, the Toronto Caribbean Carnival has evolved into North America’s largest event of its kind. With more than one million participants prior to the pandemic, the carnival showcases the very best of Canadian Caribbean culture and arts.

“The design was inspired by Fiestas in the Philippines,” explained Ezer Cruz, graphics coordinator at Metrolinx and designer of this year’s bus wrap

“Both Caribbean and Filipino cultures share the same passion and enthusiasm when celebrating these festive traditions. The rays of the sun represent the culture’s vibrancy, and the symbols represent the never-ending unity and bonding of people celebrating the festivities.”

The bus will be in service for a full year, long after the party is over. Some customers will also be able to use a new, limited-edition custom PRESTO card.

Metrolinx will have a tent set up at the Grand Parade and staff will be handing out free PRESTO card decals which includes the new bus wrap a design and one of 21 flags, so customers can represent their nation whenever they’re on the GO.

The transit agency will also have a live mural at the event, as well as a refresh and recharge Station. This will help people cool off and recharge the devices used to capture the event. 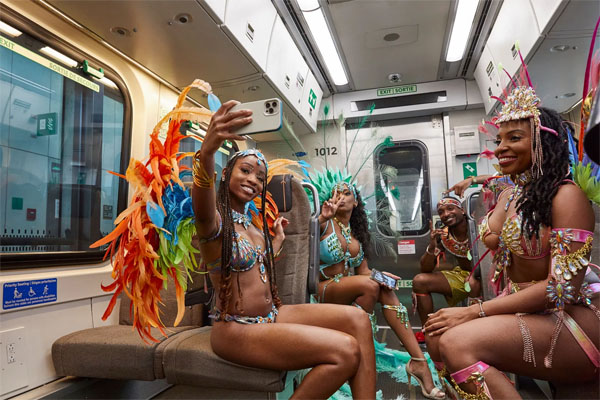 Weekend passes and schedules
Special Kitchener Line train service will be added on Saturday to give customers more options to get to the Grand Parade.

Customers travelling on the Stouffville line and GO Bus Routes 16, 21 and 31 should make note of service adjustments that will affect them on Saturday. Customers can plan their journey using gotransit.com.

Discounted weekend passes and more service are just some of the ways Metrolinx is making it easier and more affordable to take GO Transit to this year’s Toronto Caribbean Carnival, as well as other events across the region.

“By partnering with these events, like Pride, the Honda Indy and now the Toronto Caribbean Carnival, we’re fulfilling our role in getting people to where they want to live, work and play, while strengthening our relationships with the communities we serve,” noted Avis-Birch

She explained that the Toronto Caribbean Carnival has always been the highlight of her summer; she’s had the pleasure of playing mas (participating in the parade) on several occasions with friends and family; and she is proud to celebrate the culture of her parents.

The Toronto Caribbean Carnival, which culminates a four-day celebration from, July 28 to 31, is expected to be bigger than ever, now that in-person celebrations have resumed.