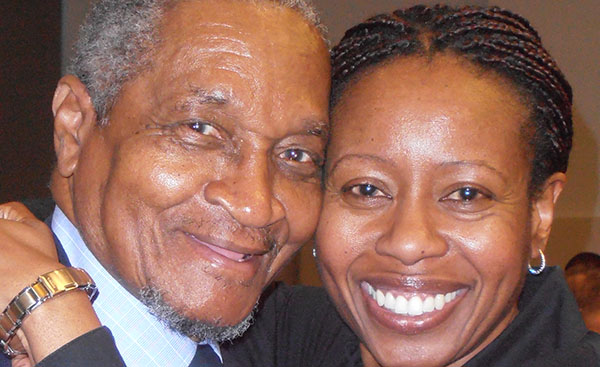 Photo above is of former TPS board member, Roy Williams, and immediate past president of the JCA, Audrey Campbell, greeting each other outside of the public meeting. Photo credit: Lincoln Depradine.

TORONTO, Ontario – Lawyers and community and social justice activists – of different races and ethnicity – have slammed Toronto officials over a new policy that opponents claim is essentially a continuation of racial profiling and a violation of the rights of citizens.

“We’re right back to where we started; where simply being black may be enough to justify being stopped,” Ruth Goba, acting head of the Ontario Human Rights Commission, told a meeting of the board of Toronto Police Services (TPS).

The “special public meeting’’ was called to discuss, and seek approval for, procedures drawn up by Police Chief Bill Blair for implementing the cops’ proposed new “Community Engagement Policy’’.

But, the policy was severely criticized in more than 30 oral and written presentations at the meeting held at police headquarters on College Street.

“You cannot afford to pass a policy like this,’’ said former Jamaican Canadian Association (JCA) president, Valerie Steele, who cried “shame’’ on TPS board chair, Dr Alok Mukherjee, and Toronto Mayor, John Tory, who is a police services’ board member.

The Community Engagement Policy is a revision of a policy passed by TPS a year ago. However, last year’s policy was never implemented because, Blair said a number of operational concerns prevented him from completing procedures for its use by officers.

However, those who championed the 2014 policy, now charge that the community engagement procedures that Blair has presented for adoption is a step backwards.

They scoff at the idea that cops will not have to inform citizens, who are stopped on the street, of their right to walk away in certain scenarios; nor will a detailed receipt be issued to someone who has been the subject of a stop that will result in their personal information being recorded and entered into an investigative database (the subject, instead, will be given a business card).

In addition, opponents of the new policy point to what they regard as the absence of limits, determining how long data collected by police will be retained; as well as what will happen to the millions of records already in the police database.

As well, police will no longer be restricted to “carding’’ for a public-safety purpose that includes investigating or trying to prevent offences, or ensuring that the individual “carded” is not at risk, as originally set out by the board.

The procedures now say police can stop and document an individual when keeping the peace, preventing crimes and in the performance of common law duties as set out in the Police Services Act.

“Every time a police officer randomly asks a civilian for identification  and information, without just cause, it is a form of oppression, discrimination and extortion,’’ law student, Knia Singh, 40, said, in his deputation to the board.

Singh, president of the Osgoode Society Against Institutional Injustice, has been “carded’’ with personal data – some erroneous – logged in the police system. He received the data after filing an application with Toronto Police.

“Every time a person is stopped and forced to give information to the police, when there is no criminal activity or investigation taking place, it is a violation of the constitution,’’ Singh said.

“There is no need to break the law and violate the Charter (of Rights and Freedoms) by subjecting civilians to arbitrary detention. How can we have a society that obeys the rule of law, and our enforcement does not?’’

The torrent of attack on the community engagement policy continued with deputations from others such as former TPS board member Roy Williams; immediate past president of the JCA Audrey Campbell; lawyer Roger Rowe; Black Action Defense Committee director, Kingsley P. Gilliam; and retired City of Toronto administration and founding member of the Harriet Tubman Community Organization, Ken Jeffers.

“I urge you to listen with respect to the community,’’ Jeffers said.

In comments, Mayor Tory described the draft as “a work in progress’’, and Mukherjee said, the board “is prepared to work long and hard to get it right’’.

The board decided to delay implementation of the community engagement policy.

Members will reconvene next Thursday, April 16, with Blair promising to report back with details on what personal information — such as name, address and associates —that his officers will continue to record during interaction with civilians.