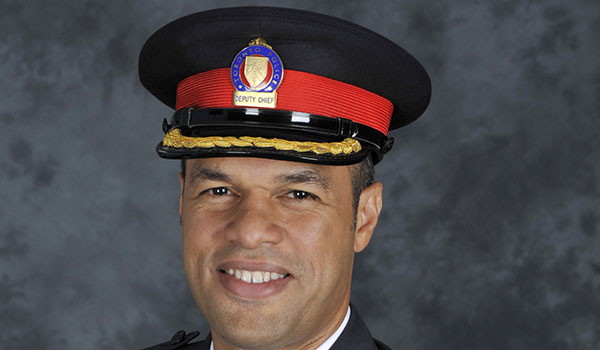 In my dual capacity as the Publisher/Editor of Pride News Magazine and Founder, Chair and Chief Executive Officer (CEO) of the African Canadian Achievement Awards of Excellence (ACAA), I hereby endorse Toronto Deputy Police Chief, Peter Sloly, and support his candidacy for, the position of Police Chief of the Toronto Police Service (TPS).

I feel strongly, and am persuaded and convinced, by his education, managerial experience and leadership skills, his supreme relationship abilities, his caring nature, and his character, forthrightness and integrity, that he is the best person for the job!

Of the publicly known candidates vying to replace current Chief, William Blair, who leaves his position later this month on April 25, Sloly is, by far, the most academically qualified and, according to my assessment, he is currently in charge of the largest of the four Toronto Police Command Units — Community Safety Command — based on number of officers (4,000); staff (200) financial budget ($451 million); and number of divisions (17).

Compared to its closest rival, the Specialized Operations Command, his Command Unit has more than three times the number of officers; 36 more staff members; and his budget is more than twice the size of its competitor. These numbers and biographies of the Command Unit leaders are available on the TPS website.

This also means that, if, as it has been reported, the TPS, Canada’s largest municipal police force, has approximately 5,460 officers and a budget of close to $1 billion, Sloly is currently responsible for managing more than 65% of its total officers and just under a half of the entire service’s budget.

He is managing almost the total force right now! I don’t know about you, but, to me, that’s extremely impressive and eminently qualifies him for the position of Chief!

Even though Sloly’s supremacy in education and management is impressive, what truly sets him apart is his effectiveness and efficacy in three vital areas, the mastery of which is mandatory for any future Toronto Police Chief: international police relations, media relations and community relations.

Sloly has participated in the following international policing programs:

This international experience, which no other of the known candidates — as far as I am aware — has, surely gives Sloly an edge.

Where Sloly really shines though, is in community relations.

It is widely, and publicly known that, historically, the Black community and the Toronto Police service has had, and continue to have, an acrimonious relationship, to say the least. So much so that, I know of cases where, young Blacks who join the TPS have been verbally abused, shunned and practically ostracised by their friends and peers.

With this as a backdrop, try to imagine the challenge Sloly, a Black man, faced, when he was selected — or volunteered? — as the frontman/spokesperson for a policy that the Black community finds the most egregious, over the last few years — carding.

Almost the whole African-Canadian community — individuals, leaders, organizations and the media — with few exceptions, has vociferously opposed this heinous policy; and now, here comes one of our own to try to sell it to us. Talk about a daunting task!

But not so for Sloly, who plunged headlong into the project — and has fared reasonably well, as evidenced by the community’s positive response to him, personally.

Some of the community’s organizations that were at the forefront of the carding policy’s opposition are now, publicly and privately, supporting and endorsing Sloly to be Blair’s successor.

Last month on March 23, The African Canadian Legal Clinic, the Association of Black Law Enforcers, the Coalition of Black Trade Unionists and Midaynta Community Services wrote a letter to the Toronto Police Services Board (TPSB) endorsing the candidacy of Sloly.

In the letter they said: “Of the known leading contenders for the position, none have publicly demonstrated equal or more willingness than Deputy Chief Sloly, to actively engage and openly discuss the critical issues in policing that have the most disproportionate and detrimental impacts on the African Canadian community. These include carding, racial profiling, police use of force, the school to prison pipeline and (the) general victimization of the community by gangs, guns, drugs and hate crimes.”

And there is more.

How does Sloly achieve such respect and support in an atmosphere of potential distrust and animosity?

From its inception, the BCPCC’s mandate was to work with the TPS to resolve issues — sometimes contentious — that arose between the police and the community and work at building a better working relationship.

O’Dell, a union negotiator, who is also the Vice-president of the Guyana Ex-police Association of Canada (GEPAC) explains Sloly’s success at community relations this way: “Peter has demonstrated to me and the Committee that he has a commitment to community while balancing the needs of his profession. Some of the issues we faced were difficult, but Peter stayed true to his profession while representing the interests of the community and the wider population.”

And, he elaborated: “In his capacity, I have seen Peter nurture new ideas from other Committee members. He brings solutions and helps others look for solutions to issues that come up. He would support their ideas and give suggestions on how to make them stronger, then stand back and allow them to work it through. This is a leader. He does not stifle any idea and truly embraces the statement, ‘no idea is a stupid idea’.”

Sloly’s successful relationship skills, especially with Toronto’s Black community, has been so efficacious, that he has received honours, tributes and prestigious awards from many respectable and influential Black organizations — the Black Business and Professional Association’s (BBPA) Harry Jerome Award; the African Canadian Achievement Award (ACAA) for excellence in law enforcement; the Planet Africa Diversity Award; and the Bob Marley Day Award.

My argument is this: if Sloly can have such enviable relationship success in a hostile environment as with the Black community, just think of what he can accomplish in a community — or communities — that does not have such an acrimonious attitude towards, and relationship with, the police?

In a hyped-up media centre that is Toronto, any individual who wants to be police Chief, has to be ultra-effective at dealing with the media, if not he/she will be chewed up and spat out.

Sloly has demonstrated and proven, over the years — whether on CBC Radio with bare-knuckled interviewer, Matt Galloway, or grizzled, tough, pushy reporters from mainstream and Black and ethnic newspapers and other media outlets — that his media relationship skills are exemplary. His track record certainly qualifies him to be described as media savvy, in both traditional and social media, for which he received the Connected Cops, Social Media “Top Cop” Award.

It seems to be normal public relations practice, nowadays, for organizations, companies, politicians, governments etc. when approached by the media for interviews on topics or situations that may put them in a bad light, to refuse, then send polished statements, supposedly explaining their points of view. Or, if they do accept the interviews, refuse to answer questions directly, and instead, stay on their prepared talking points, even though they may be inappropriate answers for the questions asked.

Not Sloly. He is always willing to ‘face the music’ with the media, answering questions forthrightly, succinctly and directly. So much so that even in the case of carding, in which Black media and Black journalists have chastised and lampooned the police severely, they end up respecting — and liking — Sloly.

On February 26, two of the Black community media’s most vocal, pugnacious and effective critics of carding, racial profiling and the police — longtime journalist, communications expert and Share newspaper columnist, Patrick Hunter, and Arnold Auguste, the publication’s Publisher and Editor — showed a definite positive bias towards Sloly for the Police Chief job.

Auguste wrote, “As for Sloly, even former chief, Fantino, once told me that he could see Sloly one day becoming chief. I have observed the evolution of this service for more than 40 years and I can say without a doubt that it is light years away from where it used to be.

“However, it isn’t nearly where it could and should be. That is why the next chief must be someone who we can trust to continue the work Blair and others under his command have been doing; someone who understands the needs and demands of modern-day policing in a city as diverse as Toronto and someone who has lived that reality.

“That is why, with all due respect to the other candidates, I really can’t see anyone else fitting that description than Deputy Chief Peter Sloly.”

And Hunter opined: “My sense is that if Sloly is appointed, it would be a signal that the powers-that-be want to see better ‘community engagement’ and an attack against racial profiling. The appointment of someone else could signal a greater emphasis on policing of the type that reasserts that every Black person, and particularly Black youth, is a potential criminal.”

And this week, I am endorsing Sloly, after considerable thought and contemplation, thereby giving him the support of the publishers of the two influential Black/African Canadian newspapers, Share and Pride, which both have over 30 years, each, of serving and defending the Black Canadian community — 100%.

The TPS, on its website, proclaims that its mission is, “We are dedicated to delivering police services, in partnership with our communities, to keep Toronto the best and safest place to be.”

Peter Sloly has demonstrated that he exemplifies that!

And, just below its mission statement, the TPS lists its core values:

“Honesty — We are truthful and open in our interactions with each other and with members of our communities;

“Fairness — We treat everyone in an impartial, equitable, sensitive and ethical manner;

“Reliability — We are conscientious, professional, responsible, and dependable in our dealings with each other and our communities;

“Positive Attitude — We strive to bring positive and constructive influences to our dealings with each other and our communities;

“Integrity — We are honourable, trustworthy, and strive to do what is right;

“Respect — We value ourselves, each other, and all members of our communities; showing understanding, and appreciation for our similarities and differences;

“Teamwork — We work together within the Service and with members of our communities to achieve our goals, making use of diverse skills, abilities, roles and views; and

“Freedom From Bias — We respect and uphold the rights and freedoms of all individuals and ensure, in all of our interactions and in the exercise of our discretion, we are not influenced by any prejudice or stereotype.”

Peter Sloly’s character and experience embodies them all, and he should be named the TPS’s next Chief!