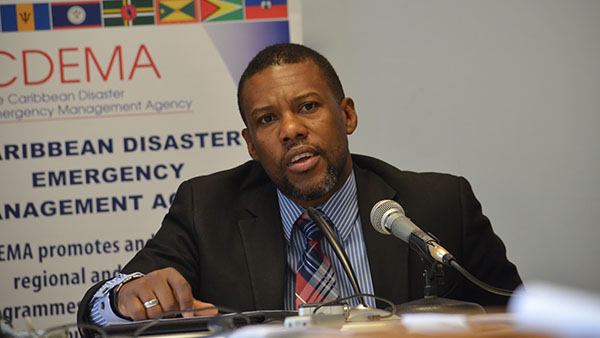 Ronald Jackson, Executive Director of the Caribbean Disaster Emergency Management Agency (CDEMA), was able to confirm severe damage to Marigot, on the northeastern side of Dominica. Photo credit: CARICOM.

BRIDGETOWN, Barbados, September 19, 2017 (CMC) – A team of firemen, from the Barbados Fire Service, left the island, today, for Dominica, to render much-needed assistance to the country that was devastated by Hurricane Maria, late yesterday.

Chief Fire Officer, Errol Maynard, confirmed that four teams were mobilised, following an emergency meeting at the Bridgetown Fire Station, this morning, and the teams will be rotated in the island over the next six weeks.

He noted that all off-duty personnel have been called into action to maintain numbers, locally.

Maynard said the first team would include a commanding officer and six fire officers, who were emergency management technicians and rescue personnel, to provide assistance to the country in those areas.

In addition, a four-man team is expected to be deployed to render assistance in Tortola, in the British Virgin Islands, tomorrow.

The rescue effort was being coordinated through the Caribbean Disaster Emergency Management Agency (CDEMA).

Meanwhile, the Barbados Defence Force (BDF) is also deploying a contingent to assist the Commonwealth of Dominica in the aftermath of Hurricane Maria

This disclosure has come from the BDF’s Public Relations Officer, Captain Maria Moore, who said humanitarian assistance and disaster relief would be provided to the island.

The BDF contingent is expected to be deployed within the next 12 hours, aboard the HMBS Leonard C. Banfield.

She said the items will be taken when the Coast Guard vessel sets sail with BDF and Barbados Fire Service contingents.

As part of the BDF’s mandate, support is provided to the Regional Security System, Member States, CDEMA, CARICOM and the wider region.

During a media briefing, he disclosed that members of the Rapid Assessment team, search and rescue personnel and a communications kit will depart for Dominica, this evening, along with a CDEMA team.

He added that units will also be deployed from St. Lucia and St. Vincent and the Grenadines.

It is expected that the Coast Guard vessel will arrive by 6 a.m. tomorrow morning, and it will also be taking supplies from Barbados to Dominica, which, Jackson said, had depleted its own reserves, while assisting sister-islands affected by Hurricane Irma, earlier this month.

“Dominica, through their own solidarity with some of the affected states, would have deployed a lot of their emergency relief items to the British Virgin Islands, so they are currently without adequate relief supplies,” he explained, saying that Dominica has an immediate need for supplies to begin its national response to the disaster.

Jackson said, based on the geography of Dominica, the rescue and relief operations will be “extremely complex”.

He said while communication on what is happening on the ground is still very sketchy, disaster officials are anticipating a series of landslides and rockfalls all over Dominica, which, he said, will make access very difficult, via road or foot.

CDEMA was, however, able to confirm, through amateur radio contact with Dominica, in the early afternoon, severe damage to Marigot, on the northeastern side of the island.

According to Jackson, the entire population of Dominica, some 69 – 70,000 people, would face direct or indirect impacts from the hurricane, in terms of shelter, access or relief distribution.

Late yesterday, Dominica’s Prime Minister, Roosevelt Skerrit, who had earlier reported that he had to be “rescued” from his own residence, said — in a Whatsapp message, relayed by Senior Counsel, Anthony Astaphan — that the world must know of the devastation to the island.