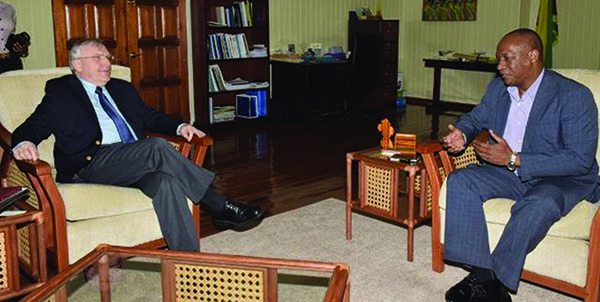 Photo above: Minister of State, Joseph Harmon, met with the Canadian High Commissioner to Guyana, Pierre Giroux, at the Ministry of the Presidency. Photo credit: GINA.

GEORGETOWN, Guyana CMC – Canada says it is willing to assist Guyana with the holding of local government elections that were last held here in 1994.

Giroux said that the two countries share a good relationship, and that Canada was prepared to assist in the local government poll, through the delivery of machines for the electronic counting of votes to ensure an efficient delivery of the results.

He said that the David Granger administration, which came to power earlier this year promising to hold local government elections, recognises that there is a need for more efficient delivery of results from the Guyana Elections Commission (GECOM).

“There is a need for us to have a more responsive system. We’ve always had problems in the past because of delayed results. This is something we would like to aggressively pursue.

“It is the view of the President, that whatever we can do to reduce the time taken to release elections results, we need to do it. We are happy for the support Canada has given in this regard,” Harmon told the Canadian High Commissioner.

Harmon said, that a meeting was held on Monday with GECOM’s chairman Dr. Steve Surujbally on the preparation for the polls, that the authorities say they hope could be held before yearend.

When the local government elections were last held here, it was won by the now opposition People’s Progressive Party/Civic (PPPC).

But in recent years, Canada as well as other international countries and local agencies, called on the authorities to ensure that the polls are held.

Former president Donald Ramotar had last year, accused the then opposition-dominated National Assembly, of seeking to usurp the powers of the Local Government Minister after it approved amendments, paving the way for Local Government elections to be held before August 1 2014.

Meanwhile, Giroux has said that a team from the University of Calgary will arrive here for talks with government, on the setting up of the Sovereign Wealth Fund (SWF) for the natural resources and the oil and gas sector.

He said the team would undertake a study of the legislative policies in place, to see how best they can be improved to suit the sectors.

Canada is also offering a training program that would benefit senior public servants and officials of state agencies.

“This offer comes at a time when we are about to establish a Public Staff College and so we would like to explore this opportunity. We want to have well trained public servants who understand that they need to serve the public and do so well,” Harmon said.